They’re savages already. Disruption cracks off the surface hiding the savagery underneath.

Ward Moore is one of the many 1950s SF authors who was underrated at his heyday and has been slipping into obscurity since, with the possible exception of his alternate history Bring the Jubilee. But after reading his novel Greener Than You Think, a cutting satire of human greed in the face of the apocalypse, I made a note to track him down and read more of his work. That’s what led me to acquire Lot and Lot’s Daughter, which combines two post-apocalyptic novellas from the pages of Fantasy & Science Fiction in one volume. 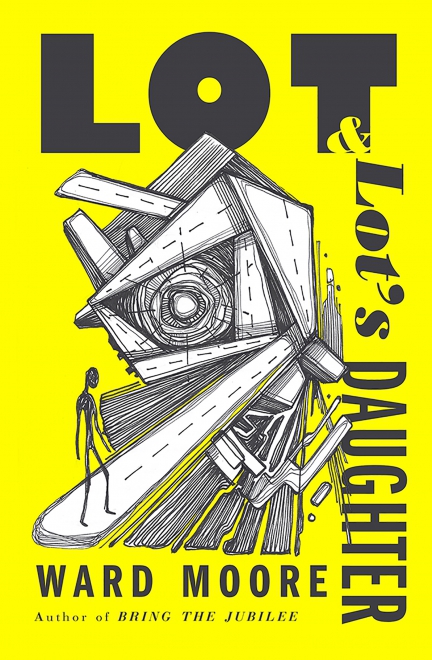 “Lot” deals with David Jimmon, a Los Angeles suburbanite whose car is packed to the gills like a mockery of a camping vacation, as he prepares for the long crawl along a freeway full of motorists hoping to flee the atomic blasts raining down on American cities. Jimmon gloats over his preparedness, mentally chiding his family—two obnoxious sons, a naive wife, and dutiful daughter Erika—for their lack of vision. For you see, unlike his family, Jimmon has realized that this is the end of civilization, that they are now on their own, that bridge nights and grocery stores and teenage dating drama has now been replaced by icy survivalism. Only Jimmon realizes how cutthroat this new world is, and how callous his family must become to survive in it.

Therein lies the crux of “Lot,” which isn’t the icy libertarian power-fantasy you’d expect; instead, it’s a portrait of the meek family man full of middle-age (and middle-class) resentments now loosed upon the wilds, a broken individual unrestrained by the flimsy pretenses of civilization or law. Jimmon’s hatred—of his neighbors, his pet, his wife’s former lover, and most of all his “parasitic” family leeching off his preparedness—becomes his driving passion, and his anger builds as the Civil Defense broadcasts fill the background with vague and static-y propaganda reports. By the end, Jimmon has decided that there is only one choice he can make to survive this apocalypse, resolutely heading for the hills while his family stares back at their past lives as fiery destruction rains down on LA like the wrath falling upon Sodom. And without hesitation, without compassion, without caring, he makes that choice.

After “Lot” ends on a vivid but open-ended note, “Lot’s Daughter” takes the story setup to its logical conclusion. An aging Jimmon and Erika eke out a living in the lonely wilds, surviving by living off the lands and hoarding their suppliers. Jimmon’s icy brand of survivalism is starting to wear on him: the pair entered what’s implied to be an incestuous relationship (evident by a young boy without any father-figure but Jimmon), but now the child and ailing Jimmon are becoming burdensome on a healthy and hale Erika. She doesn’t wish to carry their weight any longer, and while Jimmon is off fishing, scavenging, and reflecting upon civilization, he finds himself getting precisely what he asked for, dead weight for a more capable daughter. He reaps what he has sown, finding out too late that some mercies and communal safety-nets might not be bad things after all…

These two novellas are bleak and shocking, and I’m kind of surprised Moore was able to push these limits in the artsy-but-mainstream F&SF, more of an upmarket publication in newsstands still dominated by the lurid and dying pulps. Jimmon’s tough choices, and the bleakness of tone and character, remind me of Wilson Tucker’s brutal Long Loud Silence, and those few who’ve read it know what I mean: these are gloriously hard-hitting novels that deconstruct the kind of power fantasies that post-apocalyptic lit tends to generate, offering a bleak, pessimistic forecast for the kind of person who gleefully looks forward to the apocalypse as “my time to shine.” These two stories are short but potent, notable entries in the realm of post-apoc lit, and I recommend them highly to fans of 1950s SF.

While a Tachyon Publications paperback has been out of print for some time, Open Road Media has recently re-released them as an ebook volume, at a very affordable price point.