I had never heard of Wilson Tucker before reading The Long Loud Silence; there’s probably a reason for that. He only wrote around a dozen books, mostly in the 1950s and 1970s—the most famous of which being the Nebula and Hugo nominee The Year of the Quiet Sun—though he was very active in science-fiction fanzines, coining the term “space opera” and being the root of the word “tuckerization.” Truth be told I never would have heard of The Long Loud Silence if it wasn’t listed on Mike White’s list of best ’50s science fiction. As an aficionado of post-apocalyptic literature, that got me looking into the novel, and while there’s not much to find written about it, what’s there is all positive. And seriously, how could I resist that amazing Richard Powers cover art? 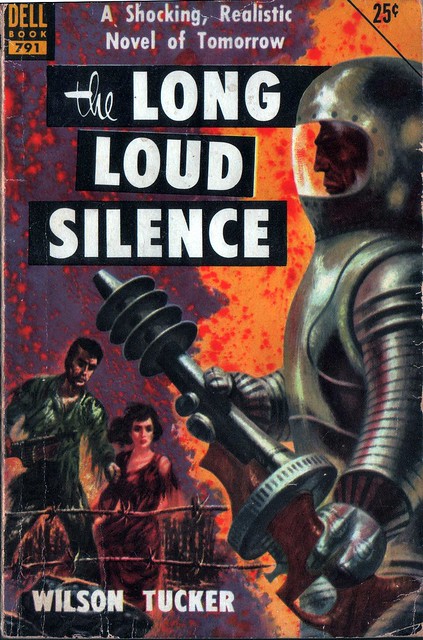 Dell Books #791 – 1954 – Richard Powers. The space-suit/raygun man has nothing to do with the plot, but the wraparound cover of burnt-out cityscapes with that radioactive background is impressive.

For his thirtieth birthday, celebrating ten years in the army, Corporal Russell Gary goes on a lengthy bender. When he awakes, he finds the entire eastern United States bombed and be-plagued by an unknown enemy—Chicago and his army base aglow in nuclear fire, the countryside filled with those killed by biological warfare. The Army has drawn the line at the Mississippi River: those on the eastern side are under strict quarantine, while those on the western side are under martial law, protected by armed guards with shoot-to-kill orders. Trying to keep the plague contained, the survivors—immune, but carriers of disease, Typhoid Marys all—are stranded on the far side of the river, cut off from the rest of the world.

Gary’s first instincts are to return to the army and get back to duty, but when he realizes how impossible that is, he sets out to survive in the dying wasteland. As food and supplies dwindle, it becomes more and more apparent that the quarantine is not temporary, and that survival will only become harder. The thousands of survivors are thinned by starvation and roving gangs of anarchistic looters; civilization’s last vestiges erode, trust vanishes, and what’s left are a hardened batch of starving degenerates. Gary’s hope for survival lies in somehow sneaking across the river and getting into the secure Western states, a task made harder by media propaganda declaring that all Americans east of the river are dead, and all that remains are “enemy agents”—the same starving citizens who are shot down in their attempts to cross the few remaining bridges.

For a 1950s novel, this one felt genuinely mature—by which I mean it tackles some very grim and shocking subject matter: it deals with sex (and polygamy), the protagonist’s slowly eroding morals, cannibalism, the United States essentially cutting loose the survivors in the East. Tucker was ahead of his time, offering a serious contemplation of the situation—Mike’s review claimed The Long Loud Silence is the The Road of the 1950s, and it’s entirely accurate. No bug-eyed aliens or super scientists here, just the dry cynicism of Gary’s survival in a brutal environment. The novel’s overall tone is very bleak; Tucker’s depiction of a broken United States and the eastern half’s downward spiral is deliciously depressing. The post-apocalyptic genre is not a pleasant one, dealing with large swaths of the populace dying off and the survivors turning to anything from fascism to marauding gangs, but The Long Loud Silence makes the other ’50s post-apocalypses I’ve read look light and cheery by comparison.

Part of this cynicism is rooted in Corporal Russell Gary. While he’s a fascinating character, it’s hard to pin him as a good person; he uses people for his own ends, is domineering and bossy, and except for some decisions later in the book he’s somewhat self-serving. I assume this is because of his character; the history we’re given of Corporal Gary is not pretty, painting him a swindler and black marketeer during World War II—a flawed character dropped into a bad situation, which makes him even more flawed. A gray character in a shades-of-gray world. And if that’s Tucker’s point, it worked well.

The only cop-out is the finale of the book, which ends on an abrupt but unfinished happy note. My guess is that’s because it was a hasty addition. According to Cyril Kornbluth, Tucker’s original ending took a darker tone, ending with Russell Gary resorting to cannibalism during the years of famine a decade after the original attack. Apparently Tucker’s editor convinced him to switch. And while the published ending is a half-happy cop-out, and despite my thoughts that that original would have continued the novel’s downward spiral of civilization in decay perfectly, it was something too shocking for audiences in the 1950s. Maybe that would have given the novel a dash of infamy to make it more remembered today, who knows.

Rinehart – 1952 – Richard Powers. A darker cover for the original hardcover; I prefer this one.

And that the novel is forgotten is truly a shame. Tucker’s prose is clear and sharp, making a taut and tense read out of a short novel (the paperback is only around 170 pages, and since I couldn’t put it down I finished it in an afternoon). The novel raises a number of philosophical points about the nature of survival, and foreshadows a number of developments in future apocalyptic literature—the similarities with The Road are shocking. The Long Loud Silence is the rawest and most authentic novel of apocalyptic fear to come out of the Cold War, a stunning masterpiece from an unknown author. Yet it remains one of Friday’s Forgotten Books; it hasn’t been printed since 1993, and there’s no sign it’ll be brought back, either for print or in digital form.

For the science fiction fan—particularly if you enjoy the post-apocalypse, or are well-versed in ’50s-era novels—The Long Loud Silence should be high on your list of books to track down. It depicts a bleak, dog-eat-dog world, which will not appeal to everyone, but if that’s your cup of tea then this novel will satisfy. Spread the word and help bring it back.

This review is part of Vintage Sci-Fi Month.