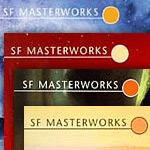 Gollancz’s Science Fiction Masterworks series is the new standard of top-shelf science fiction, a wealth of classics stretching back to the genre’s early days all the way to the recent past. If you want to get started reading SF it’s a pretty good place to start; just pick a few, find the authors or eras you like, and go from there. They’re affordable, have quality cover art, and collect the best and brightest authors in the history of SF.

But there’s a lot missing from the list—a number of deserving authors have slipped through the cracks, for one reason or another. Some reflect issues that the genre itself grapples with, but should hopefully be overcome for such a pinnacle series. In recent years the editors have tried to add more women writers, but the series is still vastly male-dominated—many women authors still don’t have SF Masterworks volumes even though Philip K. Dick has a dozen volumes, Wells has seven, and Clarke has five. There’s also a strange avoidance of short fiction collections—there’s a few, but not enough to represent the authors who wrote primarily in the short form, and not half as many as I recall Fantasy Masterworks having. And it’s heavily weighted towards Anglo-American writers, save for Karal Capek and two works of the Brothers Strugatsky.

Thus, here are eight novels I’d add to the SF Masterworks series, and why.

When Joachim emailed around asking for support in this project, I jumped to action and ignored him for a few days. (Actually, I didn’t see his email, but it amounts to the same thing.) The original idea was to do six or ten books, but I split the difference and went with eight. And narrowing down to a list of eight was like pulling teeth. At first I blanked, and couldn’t think of anything that wasn’t already in the Masterworks series. When I stopped looking at the list of existing Masterworks volumes and started looking at my shelves I came up with thirty some titles and had to stop before I drove myself mad. Trimming that list down was tough; there’s a lot of books I’d like to see added from personal preference, though I also realized there are works that deserve representation before Camp Concentration, The Big Time, The Book of the Long Sun, or The Long Loud Silence. Gollancz also beat me to the punch on two cases—Leigh Brackett’s The Long Tomorrow and James Tiptree Jr.’s Her Smoke Rose Up Forever came out earlier in 2014. I’d forgot about that, but at least it made trimming my list easier.

These eight that I’ve picked are still influenced by personal bias, but I’d like to think they are worthy additions. I restricted myself to one book per author, focused on authors who didn’t already have multiple books published as SF Masterworks, and can only in good conscious pick works I’ve read (thus anything missing is a flaw in my reading choices). Also, last I knew the series did not accept books published within the past 24 years, so I didn’t look at anything 1991 or later. Every one of these writers has won many awards and contributed major works to the genre. Obviously, Gollancz has real-world publisher issues to deal with—negotiating publication rights, determining market viability, etc.—but if I was king for a day, these eight I’d push through.

The eight I’d push through today, at any rate. I’d rather my list have more women writers, or more collections, or more non-English speaking writers—I could pick a Top 10 list for the first two topics, and would be interested in reading everything on a Top 10 list for the third. Regardless, these eight are what I consider the most worthy works in the speculative genre not yet included in the SF Masterworks series. Take that for what you will.

Bradbury, one of the 20th Century’s greatest SF stylists, doesn’t have a single SF Masterwork to his name. (Fantasy Masterworks, yes, but here I take issue with where one of my favorite authors is shuffled.) I wonder if it’s an after-effect of Bradbury’s rapid rise in popularity, jumping from the pulps into slicks like Collier’s and Playboy in the ’50s, for which the SF community gave him a cold shoulder for decades. Between his greatest novels, Fahrenheit 451 and The Martian Chronicles, I’m drawn more towards the latter; Fahrenheit is more well-read, and I think The Martian Chronicles has more of Bradbury’s charm: it has his gift of language, his nostalgia, his ability to convey raw emotion through the written word. A fixup of ’40s and early ’50s stories makes it disjointed, yes, but also multifaceted, tying together a diverse range of themes and tones. This future-history has humans leaving Earth to suburbanize Mars, replacing the wise and serene Martians until nuclear apocalypse dooms Earth. But through the nostalgic sadness lies hope and wonder, as only Bradbury could have written.

It’s tough picking a single Butler novel when so many of them are qualified candidates, but I went with Kindred, because it’s one of the most powerful SF books you can read. This is pure literary power, the crushing narrative of Dana, a modern 1970s African-American woman thrust back into 1810s slave-holding Maryland. As Dana is whiplashed back and forth between her time and the past, she realizes she’s being drawn to the young son of a plantation owner whenever he’s in danger—one of her great-ancestors, who faces his own culture-shock when Dana’s white husband is drawn back in time. A metaphorical slavery, if you will, a yoke of time-travel to serve the needs of this trouble-prone boy who becomes a troublesome man. The best science fiction isn’t “best” because it has great rayguns and rocket ships; it’s “best” because speaks to the human condition and engages thought. Kindred does so while navigating a difficult topic.

Much like Octavia Butler, it’s hard to restrain myself to a single C.J. Cherryh work when so many of them are deserving. I could have picked a half-dozen books from these two authors and called that dozen my list. (Besides, I half expect Joachim’s list to be all Malzberg). Cherryh wrote the space opera of the 1980s, toughened and packed with action and political intrigue yet still retaining the human element, capable of limitless wonder in how she built her worlds and alien cultures. Forty Thousand takes all of that and spreads it over hundreds of years, centuries of development on a colony world of clones abandoned to fend for themselves. With no masters to issue them orders or control their feelings, the clones develop their own societies and factions, forced to adapt when the planet refuses to adapt to their conveniences. Cherryh doesn’t rush or dawdle this expansive narrative, instead giving it the proper amount of space to grow—the result is an impressive achievement.

Ellison deserves a SF Masterwork—one of his own fiction, not just one for Dangerous Visions—based on his titles alone: “I Have No Mouth And I Must Scream,” “Repent, Harlequin! Said the Ticktockman,” “Pretty Maggie Moneyeyes,” “The Whimper of Whipped Dogs,” the list goes on. Even the less evocative titles—see “Jefty Was Five,” “Worlds to Kill,” and “Shoppe Keeper”—belie the stories’ depth and presence. Ellison wrote some of the most surreal cerebral works of the 1970s, a melange of razor-sharp social criticism, ironic humor, and artful prose. At his best, reading an Ellison story is an experience that will keep you thinking for days. The question isn’t if Ellison should be included, it’s which dozen or so stories from his sizable oeuvre should make the cut.

I’m still shocked that this isn’t already in the series. Gibson’s debut novel landed on shelves with such force that its impact is still being felt today. This gritty heist novel merged the linguistic and artistic freedoms of the New Wave with a Hard SF focus on 1980s technological ephemera and cloaked it in the garb of a neo-noir thriller. Gibson coined the vernacular of the ’80s and ’90s cyberspace revolution—virtual reality, hacking, jacking in, black ICE, the ‘net—lodged in a dismal future of capitalism run amok, of vat-grown Yakuza assassins and rogue A.I.s. What most readers focus on is the 1980s computer technology, revelatory in its day and long since dated, which gives short shrift to Gibson’s expansive world-building, sharp dialogue, and excellent plotting.

Alternately, The Futurological Congress. Or The Cyberiad. Or any Lem, really. In Lem’s case, I assume he doesn’t yet have a Masterworks volume because he distanced himself from American SF, though his work is very much science fiction. I’ll stick with Solaris since it’s his most famous novel, and I’ve reviewed it here so there’s that. Lem is one of the most literate SF authors, his elaborate use of language lost in those often ham-handed Cold War-era translations. (Solaris went from Polish to French to English, losing much along the way.) His books are science-philosophy, speculations on language and technology, the alien Other, and the barriers to mutual understanding. Solaris showcases those themes with a living alien planet, attempting to communicate with a handful of human researchers—probing their minds, unearthing their secrets. As Anglo-American SF of the era focused all too often on the betterment of technology and advancement through alien technology, Lem offers a refreshingly unique, thought-provoking, and terrifying alternative.

You could say this is cheating, but there is a precedent to SF Masterworks having doubles (e.x. the original Wells, Sladek, and Moorcock volumes). That and the titles make a wonderful pair. Judgment Night is perhaps Moore’s finest space opera, a fast-paced novella that showcases Moore’s stylistic prowess and lush imagery. Doomsday Morning is a more traditional SF narrative, an introspective work about an actor ordered by a Fascist government in a dystopic future America to infiltrate a rebel cell in California. Together, these works show the strengths of one of SF’s earliest and most underrated literary ladies: fast-paced flashy adventure and pensive, thought-provoking drama. One represents her work in the ’40s, when she and husband Henry Kuttner carried the torch while most other authors were busy with war-related work. The other stands in for her work in the ’50s, and shows the direction she could have taken had writing SF been deemed an appropriate task for a woman by her second husband.

Robert Sheckley – Watchbird and other stories

SF Masterworks has eschewed short fiction collections, but the few in there have once again set a precedent. And since Robert Sheckley’s best writing was in the short form, a collection of short stories is the only way to do him justice. Sheckley is one of the great social satirists of the 1950s, writing stories like “Watchbird,” “Pilgrimage to Earth,” “The Accountant,” and “The Monsters”—stories that make you laugh and think at the same time, skewering human foibles and society’s banality through wicked wit. Sheckley’s stories could be quite macabre as well—see “Paradise II.” Regardless of their tone or content, they hold up well to this day. And much as with Ellison, there’s too many good stories to fill just one volume.

See What Others Say

This post was made in conjunction with a half-dozen other prominent SF book bloggers posting their own lists; check out their blogs and do some comparing and contrasting. Let us know what you think in the comments section. And who knows, maybe we’ll see some of these books join the Masterworks ranks in the next few years?

(I’ll add to this list as they come in. And heck, feel free to post your own.)

28 thoughts on “My Eight Additions to SF Masterworks”