Forty Thousand is set in Cherryh’s sprawling Alliance-Union universe, sometime after the events of Downbelow Station, so a little history first. Through the Earth Company, humanity explored space ever outward from Sol, first building stations and then finding habitable planets. After some centuries of exploration and trade, the farthest colony-planets formed Union and went to war with the Earth Company. Caught in the middle were the spacefaring traders and cargo-haulers, the merchanters. This Company War ended with the forming of the merchanter Alliance, a neutral third-power interested in freedom of movement and controlling trade, leaving Union to its space and abandoning the destitute Earth to its meager Sol system.

Now, Alliance and Union live in an uneasy peace; Union seeds colony worlds with its genetically engineered, psychologically conditioned clones known as azi, claiming ground for when Alliance pushes into Union space. The planet Gehenna II is one such colony planet: over forty-thousand azi and a few hundred “born-man” humans are dispatched to form a colony, given the supplies needed to establish a foothold. The planet is primitive, but habitable; the most advanced native species are a range of mound-building reptilians that display limited intelligence—dinosaur-like behemoths called caliban, and graceful smaller lizards termed ariels.

The plan is that the colonists will have three years to establish their settlement, at which point ships will return to resupply and prepare for the installation of birth-labs, the cloning facilities that produce azi. For political reasons unknown to the inhabitants, the ships never return, leaving them to struggle along. As their equipment breaks down, their electronics are eroded by the weather, and the azi fail to undergo their conditioning tapes, the colony must learn to make do with what they have, the forty-thousand azi forming their own civilization and culture out of their own shared experiences. And it turns out the resident caliban are not as unintelligent as believed… 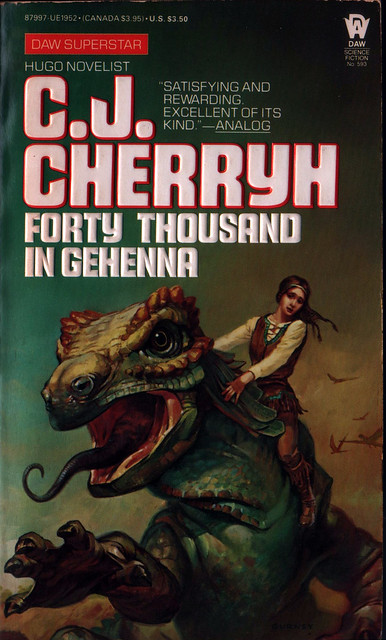 Cherryh does not write easy or simple books; her narratives are rich in characters with multiple points-of-view, with deep, twisting plots that demand a reader’s attention. Forty Thousand is even moreso than usual, because it follows the colony’s development across generations. It’s fascinating to see the colony begin with high hopes and lofty ideals, then see the civilization of Newport along the Forbes River break down into the anarchy of primitive Gehenna Base along the river Styx. The novel tells the story of numerous born-man and azi characters and their descendants, progressing along the major stages of the colony’s life as it evolves and adapts.

Failing to force Gehenna to accept Terran standards of civilization, the colonists adapt and remold themselves over the generations to fit their environment. The theme is clearest with the first generation of azi workers, attempting to understand events beyond their comprehension. While not stupid, they are simple-minded in their obedient programming, and move forward believing that their labor is serving a greater purpose they just can’t see. Meanwhile, the azi struggle at becoming authority figures themselves, and their undisciplined children run wild. Gehenna’s second generation moves away from the hard-working obedience of their parents, moving closer towards the caliban. Some even flee the failing base and live in the caliban burrows, and the azi line begins to evolve and grow.

The azi are fascinating characters to follow. Industrious but lacking free will, the novel shows the growth of azi self-determination, the evolution of vat-grown labor as it’s left to its own devices. I pity the elder azi who arrived at the colony’s founding, as they fail to comprehend that everything they’d ever been taught has come crashing down around them, as they fail to understand the thought-process of their children. The later generations regress into a neolithic society, around the time Alliance gains control of Gehenna and is forced to initiate first contact with its own species.

The novel uses an expansive sense of scale, following some twelve generations of azi-born and mixed human-azi ancestry. We follow some four or five major events in Gehenna’s history, from the founding up through the establishment of a dominant culture, seeing how the generations (and their actions) shape the planet’s later history, learning more about the strange caliban. The azi tend to name their descendants after those who have came before, leading to a dozen Jins and several variants on the same names (Elly/Ellai/Elai, Dean/Dain/Din); a realistic choice as the azi gain a sense of ancestry, but a minor reading annoyance. The progression of time is also bittersweet, in the sheer number of characters who grow old and die—hopefully in that order.

And it’s not just the use of time that gives the novel that sense of scale. Cherryh tells the story in traditional narrative, and bits and fragments from the characters’ world—journal entries, memos, notes, orders and directives. Things like maps, personnel lists, and genealogical lineages start each chapter, marking the dead and the newly born, tracking the growth (or decline, or re-growth) of the colony and its environs. There’s a lot of material here, but not a lot of wasted space; every piece is used with purpose, something that becomes clearer a generation or two later when we see how Gehenna’s civilization progresses.

Forty Thousand in Gehenna is an ambitious work from a writer who does not shy away from complex narratives. Most writers would take the concept—“the first 300 years of an abandoned colony world”—and make it into a 600+ page novel, a trilogy, a series. Cherryh did it in 440 pages, and aside from a few hiccups, succeeds with style. The major theme—following a group of programmed clones over the centuries, bereft of their programming and forced to create their own culture that adapts to their alien environment—continued to impress me with its brilliance. It’s one of the most expansive works in science fiction I’ve read, and highly recommended because of that.