C.J. Cherryh is turning out to be one of my favorite authors, and ever since I read her Faded Sun Trilogy I’ve been itching to get into more of her work. Cherryh was one of the new authors “discovered” by Donald A. Wollheim’s DAW books in the ’70s and ’80s. Her style was a reinvented space opera—intrigue, war, espionage, greed, compassion, expert worldbuilding, tragedy and triumph, writ large on a pan-galactic scale; it blends a focus on the softer sciences with realistic depiction of the hard sciences. It proved to be a hit: Downbelow Station won her the 1982 Hugo Award. Between its award-winning nature and the fact it was the origin of her sprawling Alliance-Union universe, I figured it would be a good jumping-off point.

Also, it’s hard to imagine that this is my 100th SF review until I turn around and see the pile of books I’ve read.

Cherryh’s future-history has humanity expanding out to the Beyond by way of the Earth Company, the dominant space-exploring power for some three hundred years. The space-born traders who haul cargo between stations are the Merchanters, each ship its own tribe or family confined by metal hull. The stationers live on the artificial satellites built like waystations, reaching ever on into the Beyond; several orbit “inhabitable” planets, of which Pell’s World and its native alien hisa was the first discovered. This delicate balance has existed for centuries: stationers need the flow of trade the merchanters provide, merchanters need a safe place to dock and resupply, and both need the cash-flow the Company brings in exchange for the flow of goods and ores sent back to Sol.

Now, the stationers furthest from Sol are in revolt, having formed Union; they have their own ships, their own goals, their own technology. Earth Company has lost touch, but wants control; its Earth Fleet conducts its own guerrilla delaying-action against Union for some time under the guidance of Conrad Mazian. The Fleet exists with waning backing from the Company and develops its own motives, a guard dog who’s since slipped its leash. Union victory is at hand; all the Beyonder stations are in Union control or destroyed. The surviving refugees from Viking and Mariner are packed into the orbital Pell station and abandoned by the Fleet; Pell shunts the lawless, frantic rabble into Q(uarantine) and struggles to keep order in a logistical nightmare.

Pell‘s motivation to maintain neutrality is challenged by both Fleet and Union: it is the last orbital station in the Beyond, with only an array of abandoned stations between a defenseless Earth and Union’s fleet. It’s location makes it an ideal resupply station or the jumping-off point for an Earth invasion.

The start of the novel collects the many characters on Pell, collecting the points-of-view characters in one place at one time:

The characters themselves are not so shades-of-gray as other character-rich novels rife with intrigue (e.g., Game of Thrones), instead having “good” and “bad” characters. This makes several of them a bit flat as characters, and a few (Kressich comes to mind) end up rather two-dimensional by the end. Though, none are “bad” without cause or motivation, and several of them (Mallory, Talley, and the hisa) are quite complex.

Downbelow Station follows these characters as the station descends into anarchy, slipping in and out of martial law as the Fleet wills it, struggling to maintain order amongst the chaos. Union operatives make contact with the bitter Jon Lukas; Ayres’ attempt at diplomacy is routinely stalled; the situation in Q continues to devolve, especially when Mazian and his entire fleet arrives and docks at Pell, throwing the situation into a shambles again. Cherryh puts the reader in the confined corridors of Pell, breathing its dank, stale air, the floors slick with the blood of rioting Q; we follow characters reacting to events on a scale so utterly out of their control, and watch how their decisions and actions have an impact. 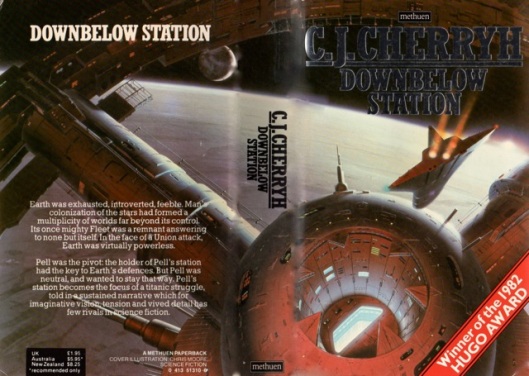 With the background of war and political intrigue, it’s important to point out that the novel is, first, a book about people. There is war, but it’s a backdrop event to the novel’s actions; there are giant spaceship battles, but most of them happen off-screen; there’s intrigue and espionage, because of the characters and their motivations. The novel’s pacing is slow and methodical, something that can annoy readers expecting a thrills-a-minute read, and after the initial burst of tension the reader faces some 200 pages of character development and intricate political maneuvering before the next power play. Cherryh also favors a terse sentence structure that’s awkward, obtuse, and full of future-jargon lacking a glossary. It has its own grace, after you acclimate to it, but it’s not the most accessible writing style: you can’t really pick up the book and just dive into the story.

That said, I found the novel overall gripping, tense, and ominous; Cherryh is adept at creating situations that demanded I keep reading to find a resolution—and the resolution is always just a chapter away. It’s a space opera less from epic battles and climactic duels, and more from its sweeping scope, grandiose scale, and cast of backstabbing thousands each with their own motivation. The first sections of the book work to establish a foundation, and when the plot has got up to speed, things begin a wild and bloody downward spiral.

My opinion is easily recognized from my failure at objectivity; I left the book having really liked it, I started the review having really liked it, and so here we are. Downbelow Station can be a frustrating read, slow and dense and littered with future jargon whose definition is left up to the reader. It’s a book that demands patience, a long attention span, and an eye for detail. Yet I found it very rewarding because of its complex, challenging nature: the Byzantine political dynamics, the multitude of characters each with ambitions and failures. That the novel is so tense and gripping—despite its lack of overt action scenes—is a testament to Cherryh’s character- and world-building skills, her deft pacing, and a simply epic plot. To me, Cherryh writes what SF should aspire to.