Bruce Sterling was one of the progenitors of the cyberpunk movement, earning the nickname “Chairman Bruce” for his work editing the Mirrorshades anthology and writing novels like Islands in the Net, Schismatrix, and The Difference Engine (coauthored with William Gibson). To some extent I feel that Sterling has been overshadowed by Gibson, but that could just be my perception—the friend who introduced me to Gibson was dismissive of Sterling’s work when I picked up a copy of Schismatrix, which is a bias I’ve carried around for about a decade. Most likely it’s an issue with me, since Sterling’s won an armload of awards for his work, so here I am reading Schismatrix Plus to rectify that. 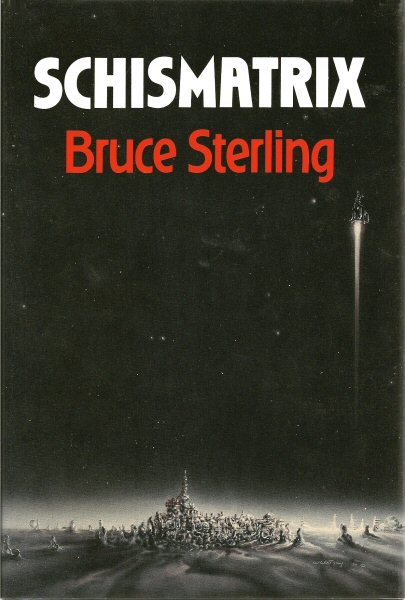 There’s a war on. On the battlefields of ideology, you must choose between humanity’s numerous factions, the most important being the Shapers—those who alter their bodies through genetic modification and mental training—and the Mechanists—those who modify their bodies through computer software and external prosthetics (e.g., cyberware). In this balkanized future, countless schisms continue to divide posthumans into branching splinter groups based on technology and philosophy. Abelard Lindsey should know, an exiled Shaper diplomat turned outlaw sundog. Betrayed by his friend and colleague Phillip Constantine, Lindsey begins his own grand tour of known space, falling back on his kinesics and genetic training as he crosses paths with the numerous factions that spring up over hundreds of years of posthumanity’s history.

Sterling’s kaleidoscopic vision of the future is awash in big ideas and sprawling concepts; there’s a drug for everything, or a piece of technology to make your life better, and posthumanity is a fragmented series of city-states evicted from earth scattered among the stars. Some of the developments are mind-boggling, some are eye-opening, others are just silly. There’s the group of pirates—a sovereign nation-state, last remnant of a failed mining syndicate—that structures itself ala American government, replacing their names with titles like First Justice and Secretary of State. There’s the genetically modified geisha who sweats perfume and pheromones, and later becomes an entire ecosystem, buildings grown from flesh and bone. Or take the race of alien Investors, who buy and swindle their way across the galaxy and make first contact to rip humanity off. Those are just some of the highlights from the first section, it’s a non-stop chain of brilliantly bizarre (or bizarrely brilliant) concepts fired at machine-gun speed.

Defining Schismatrix Plus is not easy; it has the grandeur and scale of a space opera, touring a high-tech solar system augmented with the jargon and technological futurism of cyberpunk. Actually, with its focus on transhumanism—posthumanism, per Sterling—it reads as one of the first postcyberpunk novels, and I would not be surprised if this influenced authors like Cory Doctorow and Charles Stross.

The plus in the book’s title refers to its composition: the 1985 novel Schismatrix plus five short stories, comprising the entirety of the Shaper-Mechanist universe. “Swarm” is about one of the other 19 alien lifeforms in the universe, a hive-minded insectoid race and an attempt to leverage them as an asset in the human factions’ war. In “Spider Rose,” an aged Mechanist trades a valuable gem for an alien pet, getting more than she bargained for in the process. “Cicada Queen” expands on some of the background of Schismatrix, showing events in the C-K city-state Lindsay helps create, while “Sunken Gardens” expands on the Martian terraforming Lindsay helps usher in. “Twenty Evocations” is the most experimental of the stories that follows the wild life of one Shaper. These are placed after the novel, and there’s some debate whether it’s best to read them first; they do a bit more to explain some of the key concepts, the universe’s history and factions. But the novel also has its own… majestic grandeur, for lack of a better term, that the short fiction often lacks.

And it has that grandeur because the Shaper/Mechanist universe isn’t the same gritty megacorporations stuff that the word ‘cyberpunk’ brings to my mind. It’s still “high-tech low-life” though, but the tech goes far beyond virtual interfaces and digital sentience. There is the space opera element, yes, but it’s more that this is a novel about posthumanity—the end result of enough genetic manipulation and wundertech to split the human animal into divergent species. This future holds up pretty well, in that I can see it—for all its pessimism and bizarre transformations—coming to fruition. Sterling was writing our future in style and theme, in human pettiness and dreams, even if the tech doesn’t come to pass. And I think that was a pretty impressive accomplishment. 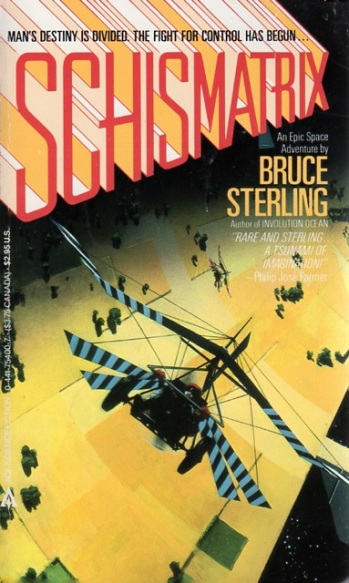 On its most primitive level, humanity operates in groups—us-and-them, friend and stranger, similarity versus the other—tribes huddling together in the glow of the campfire, envious and fearful of the other tribes lurking in the darkness. Today, those boundaries are set by ethnicity, religion, geo-politics, and culture. Life moves in clades, comes Sterling’s ever-present refrain; in this vision of the future, technology and ideology are the demarcation lines, having become one and the same. There are times when the factions band together or enter periods of detente, but over hundreds of years any lasting peace is trodden under the ambitions of the Shapers, or the Mechanists, or one emergent ideology or another. If you think this sounds grim, there is a silver lining of hope—by the end of their journey, Lindsay and the other long-lived characters have made realizations about life, leading to the creation of a post-posthuman species. I’d argue that the novel’s central theme of transcending humanity also ties into its theme of the eternal pursuit of happiness, giving our posthuman society very human flaws and motives. 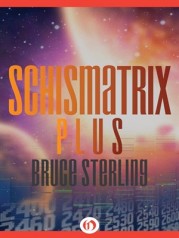 In all honesty, I read a few pages and expected this was going to be a meh read for me—my reading preferences don’t really lean towards gonzo postcyberpunk, unless you count Transmetropolitan. But, that’s why I don’t make assumptions and go into every book as a blank slate. Schismatrix is a wild, ideas-a-sentence ride, a frighteningly vivid look at three hundred years in the future. It’s hard to keep track of things when twenty years can go by in the space of a paragraph break, and the bizarre universe will cause some readers’ eyes to roll. But for pure sensawunda, backed by some subtle but poignant philosophizing, Schismatrix impressed me. Its sweeping vision covers hundreds of years in as many pages, and while it’s demanding, it can also be very rewarding. I didn’t quite fall in love with it… but I came close. And I’ll definitely give Sterling more consideration when I spot his work on the bookshelves.

Thanks to Open Road Media and Netgalley for providing an e-ARC in exchange for an open and honest review (though to be completely open and honest, I have a dead tree edition somewhere around here); Open Road is releasing the ebook version on 30 December 2014.

7 thoughts on “Schismatrix Plus – Bruce Sterling”