I don’t think that Dashiell Hammett’s impact on the mystery genre can be understated, given that he created such classic novels (and films) as Red Harvest, The Glass Key, The Thin Man, and The Maltese Falcon. After he began submitting crime stories inspired by his own career as a Pinkerton agent to the Black Mask pulp, the magazine began to attract similar writers, and the hardboiled school of fiction was born. But most of Hammett’s earliest stories have not been easy to acquire, as many of Hammett’s earliest stories have never been reprinted… or haven’t been reprinted since the 1940s. (This was influenced in no small part by Hammett’s blacklisting, as McCarthy’s subcommittee declared him “un-American” for his membership in the Communist Party.) But in this new digital age, it’s becoming increasingly easier to republish older material: Open Road Media/MysteriousPress is releasing a series of 9 ebooks to collect Hammett’s complete Continental Op stories. 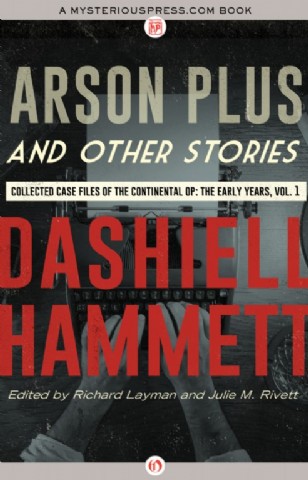 “Arson Plus” is one of Hammett’s earliest stories, and while the story is unmistakably Hammett’s—written in sharp, no-nonsense prose—I was surprised to find that it feels less like one of Hammett’s typical hardboiled tales and more like any other traditional detective story from the era, somewhat relaxed as the protagonist hunts for clues. The Continental Op is called in to investigate a house the burned down out in the countryside, a potential murder by arson; and so the Op methodically interviews all the witnesses/potential suspects one by one, working to unravel what really happened. It’s a solid story of investigative work, and the “a-ha!” ending is both a nice surprise and entirely plausible.

“Crooked Souls” comes a little closer to the Op you see in Red Harvest, having a bit more action and a faster pace, another step down the road in the creation of the hardboiled detective story. This time the Op is called in on a kidnapping case, where the daughter of a local industrial baron has been kidnapped and is being held for ransom. Her father—a strong, bullish man—wants her back, but refuses to pay the kidnappers. The Op, working with the local police, scramble to find the kidnapper while setting up a “sting” cash-exchange, which leads to a few riveting scenes when that plan doesn’t go as expected. I did find the “surprise” to be predictable—in that I predicted it—but still very much enjoyed the story. I’d say it’s my favorite of the three.

“Slippery Fingers” is a murder investigation, where an aging but wealthy man has been stabbed to death with a letter-opener knife. The police have several clues—bloody fingerprints, the murder weapon, and some minor suspects—but the trail is going cold after several days, and the Continental Detective Agency’s services are requested. That’s when one of the victim’s old friend shows up, ready to point the Op in the direction of some possible suspects. This old friend is cleared via an alibi, and more importantly because the fingerprints don’t match… but Hammett has an interesting if unsurprising twist to reveal. This is another solid story, again more of a traditional detective story though a bit punchier from some of its developments and sharp prose.

I find it fascinating to see Hammett’s early beginnings as a short-story writer, as just six years later his style—and the genre—would have evolved to produce the hardboiled classic Red Harvest. You can see many elements that would become staples of the hardboiled school of fiction, namely the writing style: simultaneously a toughened-up and trimmed-down version of Faulkner’s or Hemingway’s modernism. These stories owe much to the Golden Age detective tales that came before them, focusing more on investigation and clues than on self-destructive protagonists and femme fatales. They’re also pretty solid detective tales, and should appeal to classic mystery readers and Hammett fans alike.

Arson Plus is the first of nine volumes to collect every Continental Op short story; each volume has three novellas pulled from the pages of Black Mask. While I’m thrilled to see the Op stories collected for the first time, at $7.99/100 pages I think these volumes are a bit pricey, though to be fair it’s still a lot cheaper than buying moldering old pulp issues.

1 thought on “Arson Plus and Other Stories – Dashiell Hammett”