In the water-thickets, the path wound tortuously between umber iron-bogs, albescent quicksands of aluminum and magnesium oxides, and sumps of cuprous blue or permanganate mauve fed by slow, gelid streams and fringed by silver reeds and tall black grasses. […] Dragonflies whose webby wings spanned a foot or more hummed and hovered between the sedges: their long, wicked bodies glittered bold green and ultramarine; they took their prey on the wing, pouncing with an audible snap of jaws on whining, ephemeral mosquitoes and fluttering moths of april blue and chevrolet cerise.

Over everything hung the heavy, oppressive stench of rotting metal. After an hour, Cromis’ mouth was coated with a bitter deposit, and he tasted acids. He found it difficult to speak. While his horse stumbled and slithered beneath him, he gazed about in wonder, and poetry moved in his skull, swift as the jewelled mosquito-hawks over a dark slow current of ancient decay.

I always find it awkward when I’m reading, or preparing to read, a book that others are already talking about; maybe it’s why I don’t read as much “new” fiction. This time around, the book in question was The Pastel City, second novel by M. John Harrison. Most of what I knew about M. John Harrison is the praise he’s received from China Mieville and Jeff VanderMeer. I knew about Harrison’s SF Masterwork The Centauri Device before I saw Joachim Boaz’ review on Science Fiction Ruminations (the comments are best left forgotten), but Harrison’s Viriconium series was unknown to me until Joachim recommended it. And by the time I’d reached it on my TBR pile, I found everyone else was reading it and that I was playing catch-up with From Couch to Moon (not a real couch) and Bookpunks (actual bookpunk). 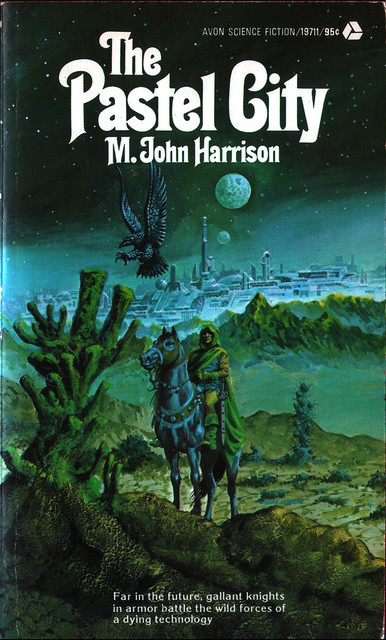 Some seventeen notable empires rose in the Middle Period of Earth. These were the Afternoon Cultures. All but one are unimportant to this narrative, and there is little need to speak of them save to say that none of them lasted for less than a millennium, none for more than ten; that each extracted such secrets and obtained such comforts as its nature (and the nature of the Universe) enabled it to find; and that each fell back from the Universe in confusion, dwindled, and died.

The dying earth of the far future is a barren wasteland, where the ruins of buildings erupt from the wastes like skeletons of a dead culture, while knights ride in their shadow, armed with sword and clad in mail. Inhabitants here break down the wonder-technologies of the past to gain the raw metal. Only one real city remains—Viriconium, the pastel city, the city at the end of time. The city finds itself at war with the northmen of the wastes—once the city’s rulers, now left to rot in the wilds and remember faded glories and long-dead heroes.

tegeus-Cromis is a poet who fashions himself a warrior, though with the death of Viriconium’s king, Methven, he finds himself without leader or purpose. But that wouldn’t lead to a very interesting story, and heroes are not meant to be poets forever, and Cromis finds himself drawn into the growing war in support of Viriconium’s young queen. In his trek to the battlefield to face the northmen, he reunites with old companions—fellow knights of Methven, preparing for one last glorious battle. En route, a strange metal bird arrives, urging Cromis away from the battle and claiming he must head south and visit the ancient Cellur instead. (Of course, the bird is ignored.) And when the northerners unleash the geteit chemosit—towering monstrosities armed with energy-blades that churn Viriconium’s ranks into a bloody mist—perhaps following the bird’s advice may not have been the worst of plans…

Looks a lot like a fantasy novel, donnit, garbed as such in the raiments of sword and sorcery. Sure, there’s no magic or supernatural elements afoot here, though it’s all about knights warring for their princess. But this isn’t your typical fantasy novel: the enemy are mindless killer automata, the technological golems of a long-vanished society, alien constructs which collect the brains of the dead. The heroes’ epic trek is not through barren Mordor, but across the Metal-salt Marsh, a sunken mire of “rusts and chemicals” draining into the sea, a surreal painter’s palette of far-future decay told in technicolor. Certainly it will appeal to fans of both fantasy and science fiction, given its mixed aesthetic and far-future feudalism. Harrison’s world is awash in the ruins of the ancient technological past, and he defines the setting with unique locales.

But it’s the language in which he describes the world that steals the show. See the descriptions of said Metal-salt Marsh at the top of this post.

That, by far, is what impressed me about this novel: Harrison’s ability to construct this world through the written word, the sheer joy of language that is his writing. It’s overall straightforward and deceptively simple, yet eminently quotable and filled with lush passages begging to be snatched up. (I’m kind of jealous that I read a paperback, as both highlighting and copy/pasting excellent passages is much easier in Kindle, but look at that awesome cover, all teals and coral and glittering city!). There’s a sharp exactness to his writing, especially with his battles scenes with their fierce tenacity, but also such artistry that The Pastel City becomes like a lucid dream—I found myself re-reading segments to make sure I was taking it all in, that I hadn’t missed a single letter of what Harrison had wrote.

Structurally, though, The Pastel City is pretty much just stock Mythic Quest, with Cromis travelling around the surreal wasteland and rising to the challenge; the setting is quite evocative at times, though most readers should notice that pieces of it have appeared in similar books about similar settings penned by Vance or Moorcock. Pretty much every element here has been seen before in another work, all the genre tropes and Hero’s Journey laid out in the same expected way. This isn’t necessarily a bad thing, but it’s worth setting expectations: the plot is the same one I typically admonish all fantasy novels for sharing, the same one every sword-and-planet novel features, and none of it breaks new ground.

But that language makes it all worthwhile, crafting a vivid and unique world with a fine combination of astute vocabulary and storyteller’s vision. The Pastel City did not, perhaps, shake the pillars of foundation, but it’s a solid sci-fantasy adventure which will entertain readers while impressing them as being exceptionally well-written. It’s had a tangible influence on the genre, both in the style and substance of its writing, and considering that Harrison doesn’t seem to be well-read anymore—especially in the States—I think a re-appraisal of his work is due. If you like the idea of a far-future fantasy that reads like a beautiful bad acid trip, a sheer joy of the English language and triumph of unrelenting style, pick it up. If the flavor quotes above do nothing for you, go, and on some dreary night may you find yourself pondering the wonders of Viriconium still yet unknown unto you.