Here we are: in the enclosure. It has been some two years and four months since we were placed here (I have fully assimilated a sense of their chronology) and now, past the initial riots and educative tortures, things are comfortable.

So, Barry Malzberg: for a decade—1968 to 1978—he was incredibly prolific in the SF field, writing some twenty novels and over a hundred shorter works, on top of articles and genre criticism and the like. His output slowed and stopped altogether within a few years, and disillusion with the genre of the ’80s set in, though he continued to publish short fiction to this day. I wouldn’t be surprised if a large segment of readers knew him from last year’s SFWA drama, despite the critical acclaim his works have earned over the years. Joachim at Science Fiction Ruminations speaks highly of Malzberg, and has done much to promote his work over the years. 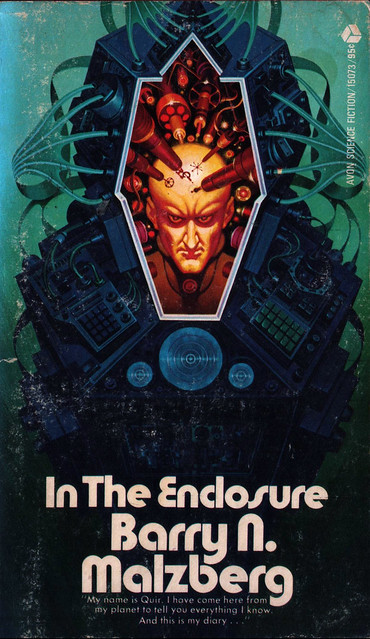 Quir is one-hundred and fifty-eighth of a crew of 248, sent to Earth to make first contact and impart knowledge from the stars. When they met the aliens (humans), Quir and his crew are shuffled into the formless enclosure and get tortured for information. Luckily, Quir’s masters back at his home planet had wiped the memories of the entire crew; instead, their minds are packed with technical information—chemistry, geology, mathematics—and they are conditioned not to lie, to be subservient to such forceful questioning. Now, it’s been over two years since they landed, and they remain in the enclosure: the alien (human) “therapists” promise that the political situation is changing given their compliance in providing information, but the sessions continue: a dull existence of answering questions related to one’s profession.

Quir is quite comfortable in the enclosure, and recoils when a higher-ranked compatriot named Plotar seeks his aid as part of an elaborate escape attempt. Turning in his superior, Quir is racked with guilt… and a desire not to be seen as a coward. In response, he begins to form his own escape plan, albeit a less-flashy plan he makes up overnight after attracting some half-hearted followers. And so, here they are, in the enclosure: Quir desperate to prove his worth by breaking out, leading the group to their abandoned ship, to fly it to a ticker-tape parade back home.

I knew going in that Malzberg’s fiction is most often metafictional and psychological, using science fiction as a method to explore deep psychological concepts, a backdrop to explore social constructs, and a means of entering philosophical debate. In The Enclosure didn’t disappoint on those fronts. Naturally, it’s an exploration of confinement and control—not just the confinement of the enclosure, but of the hierarchical system the aliens come from. It stems from that core conceit, and Malzberg’s sardonic black humor that becomes depressing well before the final reveal twists the knife: perhaps you’re not cynical enough to believe that humanity’s first instinct upon receiving visitors won’t be to throw them in prison and torture them for information, without proper trial and in flagrant disregard for “innocence before proven guilt before a trial of their peers,” to which I respond “Hello, Guantanamo!”

It’s fitting that, with this strict hierarchical system, only those ranked below Quir will follow his half-baked plan, even as Quir rebels against the system—rebels against Plotar, at least, in resentment for Plotar’s higher rank as the master of rituals. It’s also fitting that Quir’s sexual politics are neolithic. If the humans treat the aliens as cattle, Quir treats “females” as objects, walking into a hallway and having his way with one as the need arises. (Quir is no hero here; the piteous and sympathetic victim sobs out “Bastard!” as Quir walks back to his room. And Quir’s mirror image, the most able person of the would-be escapees, the one with the most memory of their home planet and purpose, is the woman Nala.) There’s also a Philip K. Dickian questioning of reality: what is real? Is it what we’re told, what we hope, or what we know—even though any of these may be a construct imprinted on our mind consisting of lies? The aliens never know what occurs outside the enclosure, whether their gifts are put to good use, if the geopolitical situation really will change and lead to their freedom… and maybe they’d rather not know the reason they were sent to Earth to regurgitate information for those who restrain and torture them, their minds wiped clean with promise of glorious memories upon their return home.

I’m also struck by Quir’s presentation as a self-serving dunderhead with an over-inflated ego; after turning in Plotar to the aliens, an attempt to keep the status quo where he is rewarded with old magazines for giving evasive answers to geology questions, he becomes rankled by accusations of treason and cowardice. He crafts an elaborate image of himself that none of the others seem to share, telling us (and maybe himself) of his “noble” intentions which are clearly self-serving. He becomes deluded by this glamour, dreaming of making heroic speeches and being elected leader once the group flees and reaches their ship, enjoying a heroic kiss with a woman as the crew cheers in the background. Quir’s hopes are as melodramatic as the situation in the enclosure is depressing, and it makes for sharp and brutal contrast. Malzberg’s prose helps out as well; it comes across as monotonous and facile, but to me it amplified everything Malzberg was saying in this novel.

In The Enclosure is the kind of smart and bitterly sardonic novel that uses the framework of SF to ask deep and disturbing questions. Calling it “depressing” and “disturbing” may come across as a knock against the novel, but that’s not my intent; it’s cut from the same cloth as Disch’s classic Camp Concentration, using its black humor for added bite. It’s an intellectually stimulating read that asks some hard-hitting questions, unsettling in the accuracy and veracity of its content. I realize that not everyone is willing to read a book that isn’t fun, lighthearted fluff, even though there are uncomfortable questions worth asking (and for most of those, it’s also worth sitting in awkward silence as you listen to the also-uncomfortable answers). Fans more tolerant of serious, unsettling themes—the blackest of black comedy, almost gallows’ humor—should consider picking up a copy. It’s a thinker, and a solid one at that.

26 thoughts on “In the Enclosure – Barry Malzberg”