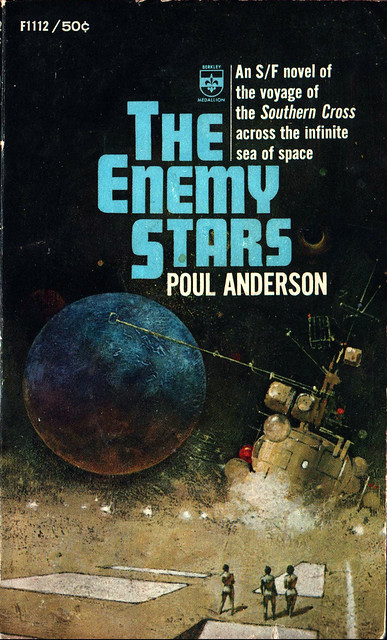 Civilizations rise and fall, but even under the rule of the dictatorial Protector, humanity’s quest for space continues unabated. Slowships ply the void thousands of light years from Earth, launched by scientists and technicians whose family lines are long since dead… though thanks to the use of a mattercaster, human crew members can instantaneously jaunt from any ship (or colony) back to the bases on Earth or its moon. The farthest of these slowships from Earth is the Southern Cross, heading out towards Alpha Crucis to investigate a burnt-out “black sun.”

Disaster strikes when the ship comes too close to the dead sun’s magnetic field; the Southern Cross is badly damaged, stranding four strangers—its crew—far from home with no hope of rescue. Any chance of escape will be up to them: if they can repair the ship or its mattercaster they will live, otherwise they will starve and die, lost and alone on alien soil. The four crewmen are:

Anderson introduces the characters, introduces the setup, and proceeds with a parlour-drama as the characters struggle to save themselves. Based on the cover and back blurb, I’d expected it to be one of his hard SF space operas (such as the similar Tau Zero), but The Enemy Stars is no space opera adventure: it’s more psychological, a character study or parlour drama of how different people come to terms with a deadly situation. Maclaren internally faults himself even as he bolsters the spirits of the other crew; Nakamura’s cowardice and quest for Zen puts him on the razor’s edge; Ryerson refuses to give in, and for the first time in his life fights, hoping to get back to his wife; Sverdlov questions the nature of the rebellion, as a kind of cabin fever drives him to fix the mattercaster, if only to escape the monotony of his fellow castaways and the light of the enemy stars.

It suggests Frank Herbert’s Destination: Void, which I read not too long ago (1978 revised edition) and really enjoyed. But, what a difference twenty years makes. Herbert’s novel was a taut thriller of existentialism, while Anderson’s plods along with the grim determination of a dead man. (Also, Herbert’s is a novel of late ’70s computer programming; Anderson’s is a novel of ’50s heavy industry and engineering.) Anderson himself referred to it as a “pretty bleak” novel; for the author—and for its time—it is more of a downer.

Anderson’s writing is what saves the novel; to say he’s a good writer is to damn with faint praise. He manages to imbue wonder and mystery into his prose; he can pull off jumping from Hard SF exposition to stellar imagery in a matter of words, and make it look great in the process. I know not everyone likes the writing of Poul Anderson, but I’m becoming a fanboy the more of his works that I read. While the novel didn’t dive as deeply into each character’s mind as I would have liked, the writing and plotting more than meet the mark. The last few lines are a bit forced, but the final climactic reveal is a neat surprise.

A story of hard science fiction that retains, even showcases, its human element; a story where the pilot wields a slide-rule and the engineer-scientists beat metals to form the solution to their woes—I’m not surprised in the least to find it was first serialized in an issue of Astounding Science Fiction, as it fits John Campbell’s idea of SF to a tee. (The original title was “We Have Fed Our Sea,” a Kipling quote that fuels the Ryerson dynasty.) The Enemy Stars is also afflicted by the conservatism of the ’50s and Astounding‘s legendarily prudish editor, Kay Tarrant, who I’d wager sanitized the obscenities into “Holy fecal matter!” and referring to a “canine-descended thing.”

The Enemy Stars doesn’t quite live up to its premise, but it isn’t a bad novel by any means. Most of its flaws are either due to its origin as a short magazine serial, or its bleak tone and methodical pacing. The bleakness hides a rather insightful philosophical discourse on humanity’s drive to explore, as well as its ability to adapt and hope and persevere against all odds. If you’re looking for one of Anderson’s space operas, this is not the book you’re looking for. But if you don’t mind some relatively stark ’50s SF with strong humanist themes, The Enemy Stars is pretty dang good—not a knockout, but worth finding. Though, avoid the Baen cover at all costs (spoilers).