I don’t think Dan Marlowe expected to continue using the Earl Drake character, as it took seven years after writing The Name of the Game is Death to return to him. Meanwhile, Marlowe had befriended real-life bank robber Al Nussbaum, at one time most wanted man by the FBI; Marlowe managed to convince Nussbaum to seek parole and start his own writing career. Nussbaum in turn helped convince Marlowe to write a sequel starting where Name of the Game left off, even providing plot inspiration and suggesting Earl Drake as a name for the nameless character. (Name of the Game‘s popularity was not lost on publisher Gold Medal, either, and fans regard it as Marlowe’s masterpiece.) The result: One Endless Hour.

A disclaimer: the great folks at Stark House Press were kind enough to send me an advance reading copy for their upcoming Dan Marlowe double, featuring The Name of the Game is Death and One Endless Hour. You can pick it up yourself for $19.95 at the end of this coming March.

The Name of the Game is Death ended with Earl Drake—err, “Chet Anderson”—broken, burned, and under guard in a prison hospital, pretending to be mentally damaged from the accident and biding his time while looking for an escape route. The way out comes in the form of Doctor Afzul, Pakistani emigrant, former plastic surgeon in his home country forced to slum it as a prison doctor here in the Jim Crow South. Afzul has the skills; Drake has the bribe money. It’s a match made in heaven. The only hurdle is a pair of sadistic hospital guards, one of whom was a friend of crooked cop Sheriff Blaze from the first book—he has it out for Drake, and isn’t too keen on the dark-skinned doctor, either.

Soon enough, the remade and renamed Earl Drake is loose, but short on cash. Not wanting to dip into his cache, he decides to do what he does best: rob banks. A phone call to the enigmatic Schemer gets him the plans for a complex bank heist: a three-man job, since the bank’s code is split and handled by two different men. But with plenty of loot for the taking, even after factoring the Schemer’s cut, it’s too tempting to resist. Drake picks up two unlikely partners: Preacher Harris, a stolid gambling addict, and Dick Dahl, rambunctious film producer of underground pornography. Drake and Harris realize quickly that Dahl is a loose cannon, but he has plenty of nerve, and it’s too late to back out on him.

Whereas Name of the Game started with one rapid-fire heist and moved on into a story of hard-bitten vengeance, One Endless Hour turns into a true heist novel at about the halfway point. The plan is complex, and requires several chapters of intricate preparation, and perfect timing for its execution. I’ve always been a sucker for this kind of meticulous heist, so I ate these sections up wholecloth. I know Nussbaum’s influence was strong here, and I have to wonder to what extent—the heist is a masterwork of planning and complexity, with a dozen detailed variables to consider and cover. Even when it includes its darkest, most twisted, most surreal elements—namely with the bank managers’ families—it still felt plausible enough, realistic enough.

Drake is a fascinating character; as I mentioned in my last review, he’s an amoral sociopath with little time for remorse or mercy, though he lives by his own twisted code. Another re-telling of his life’s story points to Drake living in a darker version of our world,  showing Drake as a boy twisted and failed by a corrupt system. One Endless Hour reinforces this: there really aren’t any sympathetic characters, maybe with the exception of Dr. Afzul. When plotting their heist, the robbers decide to take the managers’ families hostage—but after kidnapping them, they find that both families have dark secrets. The happily married middle-aged couple has a mentally handicapped daughter chained up in the basement, too ashamed to seek some kind of aid, but refusing to let the world know they fostered an imperfect child. The nuclear family’s teenage daughter is a pot-smoking tramp, while their younger kids are already cynical and jaded, assisting the robber trio by revealing bank alarms and hoping they’ll stick it to the man by making off with the loot.

An amoral, dark character Drake may be, but there’s a reason we empathize and root for him: the world he lives in is darker and more corrupt than he is. 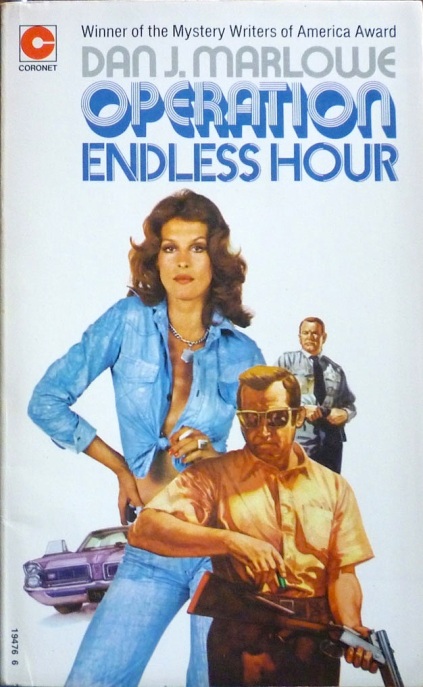 Coronet – 1975 – artist unknown. The British versions were all renamed to include Operation in the title.

The Name of the Game is Death is a brutal, hard-hitting masterpiece; Marlowe’s sequel is slower at times, and Drake is less sociopathic, but it’s still punchy and slick and full of action. The first half is the vengeful Drake escaping from the law, the second half is a heist planned with the intricacy of a Swiss watch. Drake is brutal yet canny, and the supporting characters are all excellent, the two heist partners’ conflicting styles causing a lot of late-novel tension. The action is hot and tense, and the planning stages are engaging. An all-around winner.

I hesitate to say One Endless Hour is as fine-tuned as Name of the Game, but it comes close; the two books have different styles, one revolving around vengeance and the other a heist, and both are excellent at what they do. Later novels will turn Earl Drake into a spy-fi agent, but with these first two novels—with Drake as the heist mastermind—Marlowe knocks it out of the park. If you liked Name of the Game is Death, you’d better read One Endless Hour or you’re losing out.