Since Richard Matheson just celebrated his 87th birthday, I thought it’d be fitting to read another one of his early noir novels. I’ve always been struck by his ability to create tension, suspense, and dread with seemingly effortless ease, and even in these first novels Matheson’s craft was impressive. Matheson’s first novel, Someone Is Bleeding, was a solid noir that impressed me, even though it was slow at points. Meanwhile his second novel, Fury on Sunday, is a fast-paced thriller. Both are very hard to come by in their original paperback form, but they’ve been reprinted together in a three-in-one omnibus (together with Ride the Nightmare) since the late ’90s. 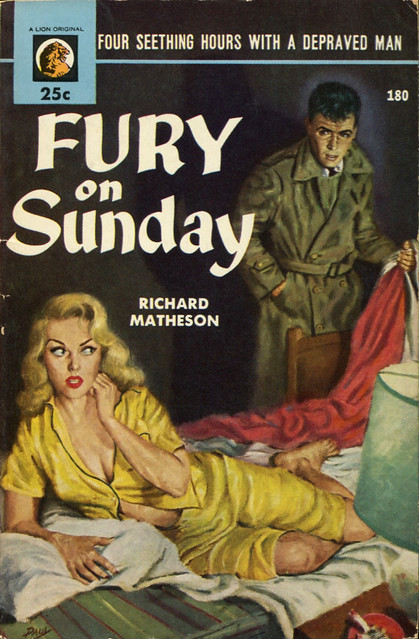 Vincent Radin was a master pianist, until his mind snapped. Now he’s the inmate at a state mental hospital, deluding himself into thinking he’s sane. Recounting classical music pieces in his head, he dreams of one day escaping to enact vengeance on those he deems to have wronged him—namely Bob, who “stole” Vince’s idealized dream girl Ruth away. Tonight, he decides, will be the night; after killing an orderly and knocking out a guard, he makes off to the apartment of Stan and Jane—a hard-partying couple and old friends of Bob, Ruth, and Vince. Taking them hostage, Vince has them wake up the happily married Bob and Ruth to convince Bob to come over under false pretenses, so that Vince can enact his murderous vengeance. Worried that Stan has snapped, killed his wife, and is after Bob as well, Ruth takes off in pursuit, so that the entire cast winds up in the tense hostage situation at the apartment. And the entire novel takes place over the tightly-plotted course of four hours, from Vince’s escape to the chilling finale.

What strikes me here isn’t just Matheson’s suspense skills being so intense right out the gate, but the psycho-sexual tension in the novel. Vince is a warped bundle of nerves, lusting after pretty women, but the values instilled by his father—that women sinful creatures that use sex to get in the way of playing piano—make him a conflicted mess any time a beautiful woman shows any skin. Of course, his idealization of Ruth is that of the purest Arthurian damsel. Meanwhile, Jane and Stan are going through a passive-aggressive marital collapse; she’s a frigid young wife sleeping around behind his back, and he’s an older husband going through a Charlie Brown-esque midlife crisis, too ashamed and cowardly to win his wife back. Jane’s secret weapon is her power of seduction, aided by the fact she spends most of the book in flimsy black negligee, and Vince’s weakness is his virginal lust conflicting with his terrified hatred of pretty girls.

I should note that this is also a dark book—even moreso than I expected after reading the previous Matheson, which was something of a head trip down darkness lane. Vince’s unstable mind leads to several grim encounters before he arrives at Stan and Jane’s, where we meet our hosts in the middle of their marriage crisis blossoming into an argument. Heck, in the first chapter of the novel Vince is raped by a male prison guard, then Vince kills him via a broken bottle to the eyes, which isn’t something I expected to find in a 1950s novel; that’s the kind of shocker more at home in something from the ’70s.

To me, it feels oddly topical to read a book about a mentally unstable man armed with a pistol, given that gun control and the possibility for mentally damaged individuals to gain access to firearms are big topics in the news right now. Vince’s back-story is revealed mostly through his muddled and chaotic memories, an internal monologue awash in chaos until Vince can batter it into calm submission. His unstoppable temper hides a sheltered, vulnerable boy whose mind was warped by a controlling father determined to make Vince a master pianist. The glimpses into his mind are dark and jagged; he’s so sure that he’s sane that he overlooks basic logic, his mind that of a naive child more often than that of a sadistic killer. But kill Vince does, and kill Vince will, to fulfill his idealized fantasy of rescuing Ruth from her oppressive husband.

This is the second novel in Noir, an omnibus of Matheson’s three early crime/noir novels.  The first one, Someone Is Bleeding, was rough but well-crafted, a novel I really enjoyed reading. Fury On Sunday avoids a sophomore slump: Matheson’s tension and suspense is amazing. His prose is cut down to its barest form, so the novel roars forth at a breakneck pace. Nothing gets in the way of the plot save for the jerkiness that comes from jumping between point-of-view characters multiple times per chapter. Truth be told, the plot is pretty simple—“madman holds two couples hostage for four hours one Sunday night”—and the book felt rougher and less polished than Matheson’s first novel. While Someone Is Bleeding felt longer than it really is, Fury On Sunday felt short. But for a fast, suspenseful thriller, Fury On Sunday is pretty good: Matheon’s ability to craft tension and suspense are astounding, even this early into his career.