To go under a river: there’s a strange thing to do, a really weird idea.

To cross a river, ford it, wade it, swim it, use boat, ferry, bridge, airplane, to go upriver, to go downriver in the ceaseless renewal and beginning of current: all that makes sense. But in going under a river, something is involved which is, in the central meaning of the word, perverse.

File under “authors I should have more of by now, but haven’t.” Ursula K. Le Guin is often touted as one of SF’s true geniuses; she rode in with the New Wave of science fiction in the mid-’60s, and was one of the primary voices expanding SF’s scope. Her earlier novels combine fantasy and science fiction to create a framework for Le Guin’s examinations within the social sciences. The daughter of a writer and anthropologist, the social sciences are a recurring focus in Le Guin’s works. Her best known (and later) works are The Left Hand of Darkness and The Dispossessed, two powerful philosophical treatises that snagged Hugo and Nebula awards. The Lathe of Heaven was an Amazing Stories serial that was nominated for both the Hugo and Nebula awards, but pulled in just the 1972 Locus award; I got it in a box of paperbacks gifted from my parents, and it sounded interesting enough to read first. 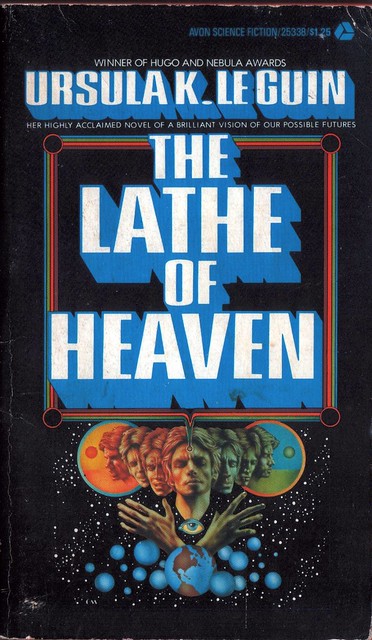 George Orr is a man with a very unique problem: what happens in his dreams will change reality when he wakes, retroactively altering the past, leaving him the sole person aware of the changes. After he has a near-fatal overdose on drugs trying to prevent himself from sleeping, he’s assigned a behavioral psychologist specializing in sleep and dreams—the jovial and enthusiastic Dr. William Haber. Of course, Haber is skeptical at first. But after discovering the fantastic truth to Orr’s claims, he uses this power to change the world for the better—something Orr doesn’t want to attempt, given that his dream-altering is wild and unpredictable, and each minor change is a butterfly-effect storm moving farther and farther from the way things should be. But Haber is dead set on righting the world’s wrongs, and if that involves using Orr to play God, so be it.

Le Guin’s world is a fantastic construct, one with a lot of depth and texture, and plenty of verisimilitude. Compared to most of the other SF novels I read this year, this is the first one to have its backdrop come alive. Le Guin comments on pollution and environmentalism, overpopulation and the cyclical rise and fall of urban centers, ongoing war in the Near East, race issues, even changing social mores—issues of the 1970s, surprisingly still relevant in the 2010s—without interfering with the gradual progression of the plot. Orr’s reality-shaping dreams are the focus, but the setting is how we see the alterations; we see the backdrop changing as Orr’s dreams affect it, without needing details spelled out or reiterated. The string of changes Orr’s forced to make are gradual at first, allowing the reader to see the setting change in small steps, before see-sawing back and forth between a grim overpopulated dystopia, Haber’s breed of hopeful utopia, and apocalyptic visions: volcano eruptions, cancerous plague, alien invasion.

Ursula Le Guin has an esteemed reputation as a science-fiction writer, and The Lathe of Heaven—one of her lesser works, if she can have such a thing—is a delight to read; her writing is strong and smooth. The prose is both poetic and gripping; the concepts big, the characters sympathetic and humane, the pacing splendid. Le Guin managed to grab my attention and hold it, in the same way a good thriller dominates the reader’s focus and emotions, keeping the plot’s progression interesting enough that I didn’t want to let go. Reading the novel is a treat, as each shocking, surprising, or emotional moment is worth arriving at. Masterful writing, with strong, deep characters, wonderful atmosphere and an amazing setting.

I found a few things to complain about, problems ranging from annoying to glaring. The first chapter dives straight into the narrative without explanation, and starting with drugged-up Orr in-media-res is unclear. And between chapter breaks the plot jumps forward days or weeks at a time, which caught me off guard. George is a hard protagonist to empathize with because of how passive and… well, wimpy he is. (Granted, that passivity was the point of his character.) I’m more impressed by the book’s ability to hook me and demand my full attention, since Haber leans on the psycho-/techno-babble crutch to sway opinion. No, it’s not a perfect book, with flaws that detracted from the reading experience, but didn’t tarnish a masterful book with beautiful prose.

Above all else, The Lathe of Heaven is complex. Accessible, and readable, but complex. A deep look will reveal bitter condemnations of John Stuart Mill’s utilitarianism, behaviorism, eugenics, a battle between Orr’s subdued and passive Taoist composure and Haber’s outward confidence in working for the greater good. The inherent perils of playing God, against the belief in letting fate run its course. Its questioning of reality can be read as a sort of homage to Philip K. Dick, as the book’s concepts are entrenched in the surreal. This thought-provoking treatise is richly layered, and the interested, astute reader can no doubt find plenty to analyze within its pages.

Panther Science Fiction – 1980 – artist unknown. Did I forget to mention the plot veers into the near-destruction of Earth?

At its best, science fiction has something important to say, and does so in a unique and exciting way. This is a genre of limitless potential, after all, but works that are both thought-provoking and gripping are less common than you’d think. That definition fits The Lathe of Heaven well: it’s one of those few SF books that’s intellectually stimulating and emotionally compelling at the same time. I could feel my mind exploding from the concepts presented, making me want to step aside and process the sheer cerebral brilliance I’d just experienced, but I couldn’t, wouldn’t, and didn’t want to put down because then I’d delay seeing what happened next: it’s an intense ride where the destruction of the protagonists—and Earth—rears its head more than once.

I’ve had a streak of great SF reads this year. And The Lathe of Heaven is close to the top of the list. No matter what part of science fiction you’re interested in, this book has something for you. If this is indicative of Le Guin’s less-famous works, I’m going to buy a lot more Le Guin. I give it the highest accolades and a vigorous recommendation.

9 thoughts on “The Lathe of Heaven – Ursula K. Le Guin”