Richard Marsten was one of the many aliases of the prolific Evan Hunter, who at this point in 1958 was just beginning his long-running 87th Precinct police procedural series under another alias, Ed McBain. (“Evan Hunter” itself was another alias, as the man was born Salvatore Lombino—confused yet?) Somehow he managed to squeeze out a fistful of books as Richard Marsten, an alias that alternated between mystery-thrillers and (bizarrely) juvenile science fiction between 1952 and 1964. 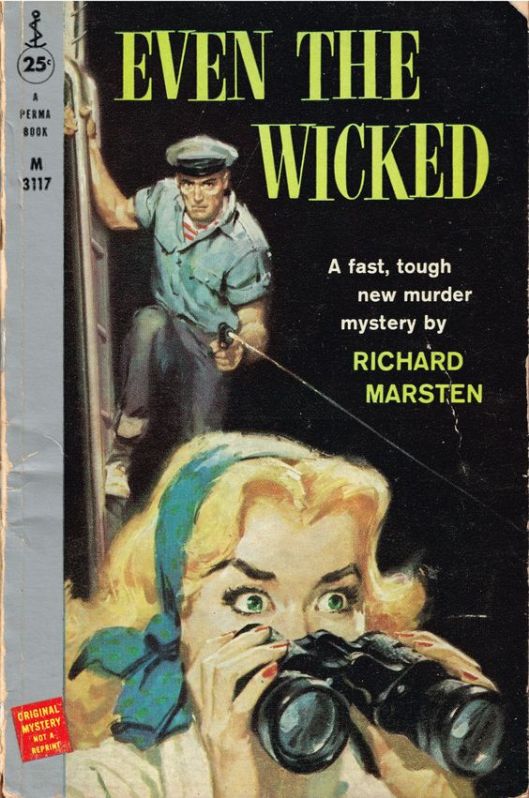 One year after the accident, Zach Blake returns to Martha’s Vineyard with his nine-year-old daughter Penny. The death of Zach’s wife Mary was ruled an “accidental drowning” and the case was closed, leaving father and daughter to their grief. But something didn’t sit right with Zach; his wife was an expert swimmer, not someone inexperienced with ocean currents. That’s when the letter arrives, a terse message that reopens the old wound: Your wife Mary did not drown accident. That’s what drew Zach back to the island, the urge to find out the reason behind his wife’s death, a quest for the truth—and possibly vengeance. He’ll find an island with a dark, seedy underbelly, a multitude of suspects and motives, and  lusty woman more than interested in him. Zach will only realize the danger he and his daughter are in when he finds the limp body of the letter’s author…

This one certainly has an intriguing setup, with Zach out to uncover the truth behind his wife’s death. That he brought his daughter along was an odd choice, but she’s an interesting if bland character rather than falling into a usual stereotype of a child, and the father-daughter dynamic works well to humanize Zach. (McBain always did have certain humanist elements in his works, so it shouldn’t be surprising.) Their investigation across the resort community of Martha’s Vineyard starts off well, proving the area a unique place to set a mystery; later on, the stakes are raised, Penny’s safety is threatened, and a panicked Zach finds himself ordered to leave the island but stuck there as he’s a person of interest in a murder investigation. The novel’s zippy pacing and continual stream of cliffhangers kept my attention.

My only complaint is how short the novel was, a slim 116 pages. It’s easy to breeze through in a night—I’m a fast reader and went through it in a couple of hours—but it leaves many elements left hanging, introduced and then written away in the next chapter. The relationship between Zach and femme fatale Enid felt like it moved at speed of plot since it certainly didn’t develop naturally; in the space of some 70 pages, they go from “she thinks I’m handsome” to “marry me.” (I expected a surprise reveal where her coming on to him was a distraction, right before she turned out to be the villain and tried to kill him, but alas, I guess love conquers all.) Most characters don’t have any time to develop, which is a shame, since we’re introduced to a bunch of interesting people (the lawyer, teenage hoods, and old sailor) who don’t really have much to do. And despite the paragraphs spent detailing his New York radio job, most of Zach’s non-wife backstory amounted to naught; nothing would have changed if he had been a tile-setter from Cleveland.

Oh, I’d also feel remiss if I didn’t ask—who thought bringing a nine-year-old girl along on a murder investigation/revenge trip was a good idea? And the use of Indians had a quaint “How! White Man” vibe that was hard to ignore. 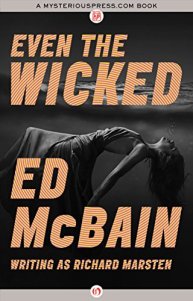 That said, I find it really hard to fault the novel. It’s the epitome of the beach read or airplane novel, a serviceable potboiler that fulfills its purpose and entertains for a few hours. The story zips along at a lightning pace, and Marsten’s prose is as sharp and strong as any other Hunter/McBain novel. This is pure pulp entertainment, drawing you in with an interesting mystery and characters, then hooking you when the chapters end on increasingly dire cliffhangers. The more of these I read, the more I start to see why the Richard Marsten alias was phased out—they aren’t the author’s best works, but I’ve yet to read anything “bad” by Hunter/McBain.

If you want a fast, taut thriller from the ’50s with a unique setting and characters, this one will definitely whet your appetite. I’m glad to see the novel is available again under McBain’s name, one of many now available as ebooks, and I’ll certainly buy more of them as they’re available.

3 thoughts on “Even the Wicked – Ed McBain”