The difference between “literary” and “genre”is something that comes up somewhat often on book blogs; the gap is both hard to quantify, yet also simple enough that it can be explained using pies. Long-time readers might already know that I have a habit of getting up on my soapbox about “what makes good genre” or defending genre works as “literary” fictions, as the (admittedly arbitrary) divide is something I’m both fascinated and frustrated by. So, needless to say I was very intrigued by the new collection coming out from Tachyon Publications, Invaders: 22 Tales from the Outer Limits of Literature. The setup is pretty simple—it collects 22 SFF stories by authors who are known primarily for their literary/mainstream writing and less so for “genre” writing. How do genre outsiders—the titular invaders—use science fiction and fantasy tropes to blend genre and literary fiction? The results are pretty impressive. 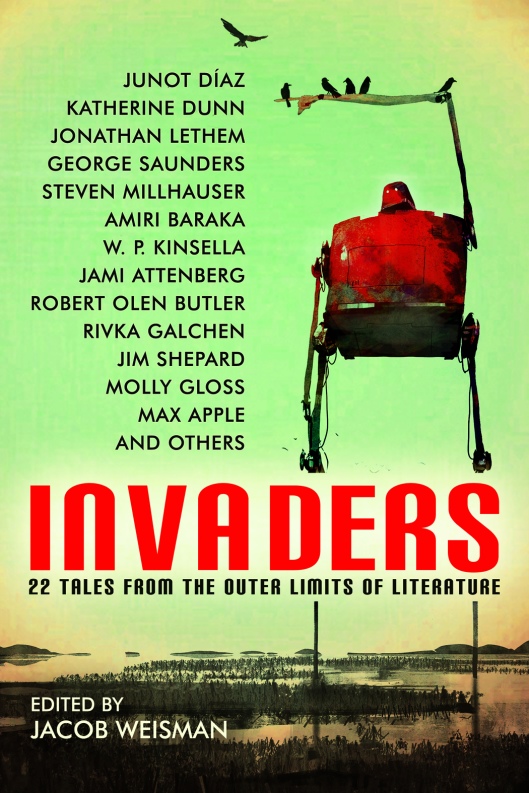 The thing that stood out to me almost immediately was the heavier focus here on the human side—relationships, sex, etc.—than in the typical “genre” works, with the near-future techno-wizardry and fantastic elements used to emphasize that human element. Take Julia Elliott’s “LIMBs,” for example, about a woman in a futuristic medical facility who we eventually realize is reacting positively to her memory treatments (possibly Alzheimer’s); the name comes from the bionic legs which enable her to move around. She happens to be in the same facility as her crippled husband, as well as the man she cheated with for several summers many years ago when her husband’s injury left him distant and depressed. Her past blossoms into the present as she begins to make connections between these two men and her past.

“LIMBs” is just one of many stories dealing with near-future technology, though it offers less to fear than others. Deji Bryce Olukotun’s “We Are The Olfanauts” introduces the latest internet trend: whyffing, or scented social media. Narrator Renton works for the company that makes these scented memes and viral videos possible, and as a content curator, he’s smelled it all—dismemberment, rape, murder—in order to find and ban videos that take the rush just a bit too far. But as his relationship—with his supervisor, no less—begins to fray, we start to see darker sides of our relationship to this addictive technology. “Escape from Spiderhead” by George Saunders looks at another frightening possibility: boutique pharmaceuticals, drugs that can make you fall in and out of love or expand your vocabulary. The protagonist is a criminal being used as a test subject, forced to test and rate different drugs that control his inhibitions and force his emotions into the dark places his handlers take him. While it ends on a transcendent note, it calls to mind both our current pharmaceutical testing done on animals, as well as our current (and future) addiction to technology.

While most of the stories fit the SF/F mold, there’s also a couple of brilliant horror pieces. Brian Evenson’s “Fugue State” is one of the longer tales in the volume, and it’s one of my favorites. It’s a masterful tale of psychological, postmodern horror about a “virus” which puts its victims into a fugue state, losing track of themselves and their goals like sleepwalkers forced to endlessly repeat their actions. Characters slip in and out of the role of protagonist, losing their memories—and minds—and picking up the previous person’s voicemail or notes, continues the other’s quest as their own. Meanwhile, Junot Díaz’s “Monstros” starts off contrasting a trio of party animals in the Dominican Republic as a horrific new plague sweeps across neighboring Haiti. The narrator is enthralled by a girl he has a crush on—“With one fucking glance she upended my everything”—and he follows her and a mutual friend, oblivious to current events; their final mistake leads to a bone-crunching ending.

The thing I love about reading short-story collections is seeing a variety of new and innovative visions, and this collection is quite varied indeed. There’s a lot of postmodern fear of our posthuman future, with stories toying with our love affair with technology and how that tech impacts our human relationships. There’s a few darkly comedic stories, like  J. Robert Lennon’s “Portal” (where a family nonchalantly finds a magic portal in their backyard), or Robert Olen Butler’s “Help Me Find My Spaceman Lover” (a funny but sadly-sweet tale of spaceman love and self discovery). There’s even a few horror gems, like the aforementioned “Fugue State.” And really, there’s not a bad story among them—the best are impressive and have stuck with me for a while, and the rest are all very good and well worth reading. That about sums up Invaders, one of the best SFF collections I’ve read in years. It’s a smorgasbord of visionary and thought-provoking stories, each different from the one that came before but no less interesting. Highly recommended, especially to fans of short fiction. And pick up a copy for your friend who doesn’t “get” SFF because they think it’s all spaceships and dragons.