Hail, Hail shows a day in the life of the 87th Precinct’s detectives; twenty-four hours of cases are covered. The novel’s divided up by the two working detective shifts, Nightshade and Daywatch, with the series’ impressive cast divvied up between them. The title is pretty indicative; every major character is here, as well as a host of minor ones, each working on various cases that crop up. We have old hands like Bert Kling, Steve Carella, Arthur Brown (for most of the book), Hal Willis, and Cotton Hawes, but also newcomers and second-stringers like Puerto Rican detective Delgardo, rookie Donald Genero, Carl Kapek (no relation), and slacker Andy Parker. 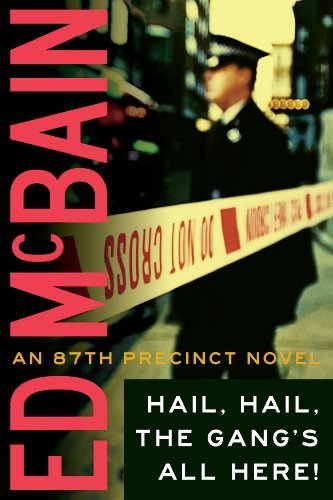 Unlike most other 87th novels, with one main plot and one or two secondary cases, this one is just awash in smaller ones. So I’m not going to go over them in too much depth, partly because of the sheer number, and partly because of their brevity. Amongst several other cases:

These plots are short and interspersed, like a web of short stories, which made the narrative choppy; but that was part of the point, I imagine. It made things hard to pick up after setting it down, since the sheer multitude of cases became jumbled after a while; the book’s size belies the amount of action that goes on between its pages. And the cases are pretty contrived, in that almost all of them are solved on the same shift they started on—extreme time dilution going on there. I’ll accept that as a conceit of the novel’s point; seeing these cases over a “realistic” time frame would be impenetrable, so let’s suspend some disbelief here.

Of course, there’s still time to flesh out the various characters; expanding on character traits, developing some of the second-stringers. We see their reactions to Parker’s shooting: glum that an officer was hurt, that they’re called in from vacation, but altogether unfazed given Parker’s unlikable nature and slacker ways. Arthur Brown is the mover-and-shaker for the second half, where Kling and Carella dominate the first half’s night shift (along with Meyer and his ghost story). The supporting characters pop in to work on the other cases, and run the full range of the cast; even the old-time stool pigeon Danny the Gimp shows up. Pretty much the only people who don’t show up are Eileen Burke and Lieutenant Byrnes.

McBain had a cunning wit that would break into his stories to varying degrees. Most have some witty turns of phrase, or humorous character banter; some, like Fuzz, are Westlake-esque in their overt zaniness. Hail, Hail is geared much towards tight-knit and fast-paced developments; not quite on par with the strongest thrillers, but tense enough for its varied plots. Hail has plenty of lighthearted moments to cut the tension, to humanize the characters. Meyer and his ghost bandits, for one; that section was handled very well, showing off both the surreality of the crime as well as Meyer’s detective prowess. Other times, it comes through via McBain’s witty wordplay. For example, after Brown spots a mask used in the grocery store robbery/Parker shooting and fishes it out of a sewer drain:

He was looking at a somewhat soiled Snow White, but this was the seventies, and nobody expected to find virgins in sewers anymore.

The strongest 87th novels work because of their developed characters, their tense and mysterious cases, and McBain’s cutting dialogue and prose. All of those elements are showcased here in fine form, making Hail, Hail an iconic hodge-podge of everything good about this series. There’s a lot going on in this slim volume, and despite its confusing labyrinth of plots and cases, it ends up a solid book, thrilling one moment, investigative the next, with the great character development and impressive setting depth that McBain is renowned for. I really enjoyed this one; I think it’s the best entry so far. A great starting point if you’re interested in getting into a fine series of police detective novels, as well as an excellent read for devoted fans who know these streets—and characters—like the back of their hands.