If the name E. Howard Hunt rings a bell, it’s because he was one of the men directly involved in the Watergate scandal, which occurred forty years ago today. (I have to say, I couldn’t have timed this post any better if I’d planned it.) A former CIA agent, Hunt was indicted for the break-in, a fact later used as a cover blurb on his novels—not what I’d use to sell novels, but whatever. Hunt started his intelligence career with the OSS during the War, during which he starting writing hardboiled noir; in 1950, he joined the CIA, a year after optioning Bimini Run with Warner Brothers. After winning a Guggenheim fellowship to write Stranger in Town—beating out Gore Vidal and Truman Capote!—Hunt moved to Mexico City where he shared an apartment with William F. Buckley; he worked on operations in South and Central America, keeping up a lengthy writing career on the side.

Hunt glorified the espionage life in his many spy thriller and hardboiled crime novels, though these books are more reflections of his dreams than the dull day-to-day life as a “political action specialist.” More than one source implies that he undertook the Watergate wiretapping job to live out the shadowy world of his novels. (Your trivia for today: Hunt’s bosses at the CIA required he to stick to pseudonyms if he kept up his writing career, something he took delight in circumventing; at one point he submitted a book using a pseudonym as requested, but made sure the end-piece said “You have just read another Gold Medal original by E. Howard Hunt,” according to Buckley.)

Besides having a hand in the coup d’état to oust the Guatemalan president (to protect the United Fruit Company’s monopoly on the Guatemalan banana industry), the disastrous Bay of Pigs invasion, and the aforementioned Watergate burglary and scandal, Hunt “confessed” on his deathbed to a massive conspiracy surrounding John F. Kennedy’s assassination… years after Hunt himself had been accused as a conspirator. Truly a man with a career worthy of love and respect. Well, here’s hoping his writing fares better than that. 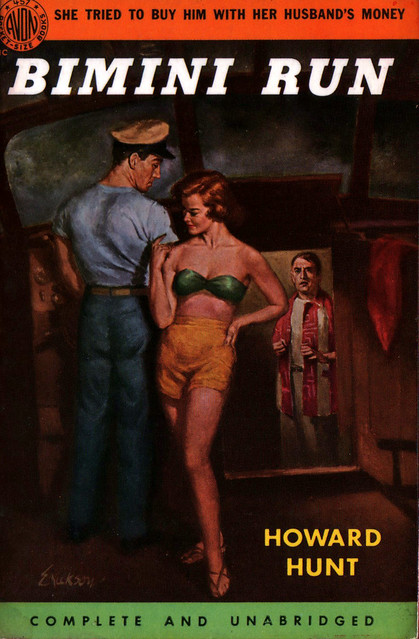 Avon Books 457 – 1952 – illo by Erickson. Avon’s post-war covers took a while to become “decent,” and never really took off to leave dullville.

Hank Sturgis lives in cycles of highs and lows; he got a football scholarship to Stanford before injuring his leg, went off to fight in the South Pacific before a Japanese bullet scarred both his collarbone and his soul, and now is working at a failing bar in Miami Beach. The typical noir protagonist who starts at a low point in a vicious cycle. After hearing of his bad luck, two wealthy bar patrons, Clay and Leslie Crawford, hire him as cook, bartender, and hired hand aboard their rented yacht, the Vela, heading out to Bimini in the Bahamas on a fishing excursion. But, as with all crime novels, things are more than they seem.

Clay Crawford is a drunk elitist, scion of a wealthy New England family, who takes his own failings out on others; his trophy wife doesn’t mind her husband’s money, but she’s unhappy with his personality flaws, and wouldn’t mind going back to the old days when she had the freedom to just paint. She hits the bottle to bury her life’s failings, like her husband. The Crawfords hoped this yacht excursion would be akin to a second honeymoon, but Clay’s hot head and short fuse puts them at odds; his jealousy grows when Leslie becomes closer to Hank. There’s also the Swedish captain Engstrom, an aging old skipper none too pleased with the way Clay treats everybody; plus a surplus of booze to keep tensions high, and more guns and harpoons than are necessary.

When the plot takes to the seas, the setting is restrained to the yacht; this kind of proximity needs strong characters to carry the novel. Here, Hunt succeeds. Clay Crawford is the rich kid who was never good at anything, grown into a man who uses money to buy what he wants. Things like his wife, a hard, smart, and independent artist raised in poverty, now at odds with her restrictive, possessive, hot-headed husband. Captain Engstrom is an aging old Swede who grows weary of Clay’s self-assured righteousness and demanding attitude. Hank Sturgis is the glue holding the tension at bay; he’s a decent guy at heart, and his role is to take the confessions of the other characters, listening to them vent their frustrations and broken dreams. He’s a burnt-out war vet with plenty of issues of his own; his battle-scars run deeper than the broken collarbone, and built a wall around his psyche. Hank pours his hopes into get-rich-quick gambling dreams that he might be skilled enough to pull off.

The pacing is a slow-burn, not a rapid fire assault; even considering that, the book doesn’t have much crime content. Attempts to build tension don’t always work, though I found the finale—a manta ray hunting sequence reminiscent of the last act in Jaws—was spot-on, and built off earlier developments. There’s even some character development for Hank; while he stops adding bricks to his Wall, it isn’t yet demolished, and his psyche remains distant. And the relationship triangle between the Crawfords and Hank is deep and fluid. What kept me reading through the slow pacing was Hunt’s spectacular prose and characterization, the desire to see how this powder keg erupts. It does. And if you have patience, and like Hunt’s prose and Hank’s introspection, the book is more than tolerable.

Berkley Medallion – 1974 – and the 1970s covers are underwhelming at best. I still get a kick out of advertising his connection to Watergate.

When it was first published, critics were underwhelmed by Bimini Run; the New York Times called it “lifeless and unexciting,” for one. (Maybe they were just bitter Hunt won that Guggenheim instead of the more well-known authors.) The slow burn style plot could border on tedious, and lacks the traditional crime content; imagine a cross between a floating parlor drama and an adulterous love triangle, minus the adultery, plus the introspection of an unlucky drifter. But Hunt writes it so damn well, I’m loath to criticize it; it’s slow, but never dull. Hunt’s writing alone made it worthwhile; I may find his politics abhorrent, but if his other novels are this good, I’ll hunt (har) them all down. Hard Case Crime reprinted House Dick, and I have several of his novels written under the “Robert Dietrich” pseudonym, so this is not the last I’ll see of Hunt.

Bimini Run is the first really well-written crime novel I’ve read all year, gritty at points, beautiful at others, altogether a solid and enjoyable read. It builds a serviceable tension on the cramped yacht, and there’s a lot of texture to the characters and situation. It’s a good option for the fan of vintage crime/suspense novels; Hunt is a solid contender, and Bimini Run is a joy of a read. Good luck finding it.