I like Frank Herbert well enough—I loved Dune in high school, and I’d still say it’s one of the best SF books—though it’s more a love/hate kind of thing. While I like Herbert’s books, his writing can be dry and verbose, so he’s not an author I seek out. It’s taken me a while to read another of his works. Destination: Void sprung out of a 1965 Galaxy novella to became a full novel the next year. I read the 1978 edition, which was “the completely revised AUTHOR’S EDITION” to account for new scientific developments, which should explain any differences in my review if you’re used to the earlier version. That revised edition was the springboard for a sequel trilogy (written with Bill Ransom) in the following years. 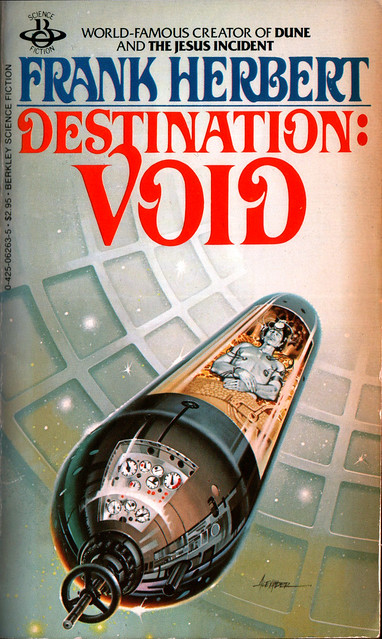 Berkley Medallion – 1978 – Paul Alexander. Dude in a tube! Revised and updated for the late ’70s to take into account new developments in the burgeoning brain-ship industry.

In the novel’s future, humans have overcome the problems of cloning, and are moving on to artificial intelligence, which isn’t going so great. As a testbed for their concepts, they load up spaceships with clones—viewed as expendable, disposable property—and send them into space, to colonize a planet in the Tau Ceti galaxy. These voyages include solar-powered spaceships laden with thousands of hibernating colonists and their supplies—everything needed to start a new colony. This is the seventh attempted voyage of the Earthling, the previous six batches of clones having all been destroyed under circumstances still kept secret from its crew.

The clones are provided with a trio of Organic Mental Cores (OMCs), which are human brains hardwired to the ship as a more advanced, semi-conscious computing system. And all three have burnt out and failed, the last one killing half of the non-hibernating crew. Now, the survivors have jury-rigged the ship enough to pilot it on manual, and have woken up one of their backups, and begin formulating plans to accomplish their mission—and, moreover, survive. Of the three options they have at their disposal, the most plausible route is for them to design their own computing system to replace both the destroyed OMCs and their time-consuming manual systems. The latter a necessity since it will take the ship some 400 years to reach its destination point, and some sort of automation is required for the crew to enter hibernation; plus, they don’t have enough food, even including the colony’s supply larder.

Given the prologue and little notes attached to each chapter, it’s pretty obvious to the reader that many of the problems which befall the Earthlings are rigged contrivances—stimulants installed by the organic Moonbase humans to push and prod the clones, keeping them on edge, keeping them working. The goal isn’t colonization, but to develop a functioning artificial consciousness, with survival as their motivation. The clones aren’t stupid and understand their disposable nature; they want to live, and the lives of thousands of colonists frozen in hyb-tanks are weighing on their consciences.

Galaxy – 1965 – Gray Morrow. I realize it’s necessary on a magazine, but this cover is rife with dead space. And weirdness.

The bleak tone is set by the introduction, where the Moonbase director and staff watch the failed Earthling Five explode en-route, before you even get into the narrative of Earthling Seven. And it continues with its claustrophobic setting, the tense relationship between the characters, the obstacles they must overcome—such as playing God and building sentience.

Early on, you realize that the crew have been chosen because of their motivations, their personality, a setup designed to keep this grand experiment moving. Several are sleeper agents, given more information on the ship’s true purpose. These characters have the task to prod and push the others in the right direction, keeping each other frosty and on-edge, without letting them know their grim reality. The crew acts not just as psychological and spiritual bludgeons but support as well, each character having a traits which make them invaluable—the psychiatrist-chaplain, the logical take-charge guy, the cowering life-systems expert, the mathematician-surgeon.

Moreso, most of the challenges the crew goes up against are intentional ones designed by the folks back at Moonbase; the failure of the various “perfect” systems (like the OMCs) is more-or-less built into their programming. The Earthling is kept in a near-constant state of sink-or-swim… to formulate continual high performance.

There’s something pretty sadistic about using “expendable” clones to explore the limits of human nature, escaping the bounds of morality to explore the depth of human possibility and accomplishment through extreme psychological pressures. That some of the clones are partially aware of their role in this opens up another whole can of worms. It’s easy to sympathize with the crew given that they’re working against such a stacked deck, and their drive to survive—their sheer humanity, their foibles—makes them quite complex.

Here lies a confused book: Herbert assumes his readers are just as interested in the technological angle as well as the questions of consciousness, religion, and existence. There’s a lot of science and computer tech that flew over my head—part of the problem is that I’m used to modern hardware, not the big old clunkers of Herbert’s day that filled entire rooms (here, entire spaceships) and ran off magnetic tape, yet whose processing power is below that of my Playstation 2. Despite the revisions, the novel’s far-future technology is dated, obsolescent… and pretty dull, given Herbert’s rigorous technical approach. Maybe if I were more of a Hard SF kind of guy, or had a stronger grasp of ’70s computer hardware; I imagine there are SF-reading scientists and engineers out there who’d find this novel orgasmic. Most readers, on the other hand…

The psychological questions I found much more engaging and thought-provoking: the morality (or lack thereof) of Moonbase’s methods, the psychological pressures of the crew’s situation, the hurdles and implications and ethics of creating sentience. The characters ask each other questions like “is a man just a machine’s way to make another machine?” and “is consciousness merely a special form of hallucination?” as they work their way through the many inherent problems. Herbert’s other big change with the revision was quoting Shelley’s Frankenstein, which should be revelatory. That side of the novel I found fascinating.

I can read another angle into this as well. Even as the OMCs and other technological services are rendered inert on an intentional basis, and even though the ship retains its powerful “dumb” electronic systems, the novel’s still about humans overcoming the flaws of technology. Where technology breaks down, humans—even clones—are there to pick up the pieces, and through hard work (math and programming!) they have to make even better technology… living, thinking technology. As all their work goes to building sentience adds new layers to this debate, and the Frankenstein allusions are dead-on accurate, adding further moral and psychological questions to the mix. That the characters themselves are clones—constructs, not natural creations, bereft of parents and personhood—layers, I tell you.

As a claustrophobic parlor-drama more laden with discourse on consciousness than action, Destination: Void falls into the “thinker” category. There’s a niche audience for this book, the overlap section of a Venn diagram with the categories “people who like Frank Herbert” and “people who are into the hard science of cybernetics.” Maybe also “people who like thinking about the philosophical, spiritual, and psychological ramifications of creating sentience/life.” For some reason, I don’t see those categories overlapping on much else, much less popping up that often.

There’s a lot of reasons why readers wouldn’t like this book: the surplus of computer science technobabble; the oblique and cerebral examinations of consciousness; the slow pacing and lack of action not summed up by “something else on the ship just broke, crew fixes it;” Herbert’s passable but less than stellar prose; the ethics behind Moonbase.

Yet contrary to all that I still liked Destination: Void, a lot more than I thought I would, for no well-defined reasons. And even though I want to run out and recommend it vehemently to somebody, I have a hard time because I’m not sure who to recommend it to. Destination: Void is a unique novel that showcases both ends of the SF spectrum, and has some interesting things to say. It’s also the most intense book about engineering and psychology you’re ever going to find, and that’s not much of a compliment. I fear it will be lost to the dustbins of SF history, given its strange and bipolar foci. Highly recommended, nonetheless.

It’s a statement on my changing tastes, since the last Herbert I read—Under Pressure (aka Dragon in the Sea), back in high school—I thought was pretty damn dull. And the similarities between it and Destination: Void are manifest: parlor-drama with intense psychological scrutiny.