Do you ever read something and go “I don’t know what the hell that was, but I liked it?” That was the first issue of Pretty Deadly for me. It’s about how a little girl became Death, as told by a butterfly and the skeleton of a rabbit.

Let me try to recap the setup, or at least what I understood of it: Butterfly and Bone Bunny retell the history of Sissy, the girl in the vulture cloak, and Ginny, the daughter of Death, though the true story is much more than that. I’d retell it if I could, but that would spoil this entire volume, and I’m not sure I understood everything—suffice to say, Sissy follows a blind man named Fox; by chance, she pickpockets something from one Johnny Coyote, and burns it. This releases the skull-faced girl Ginny, Death’s daughter, hunting Fox in search of retribution. Another gunslinger girl named Big Alice also follows in their wake, chasing Fox for her own reasons. It’s an epic tale of death, love, loss, and retribution, a mix of fantasy, magical realism, and mythic creation story set in the old west.

So, it’s kind of a weird and unique experience, is what I’m saying. 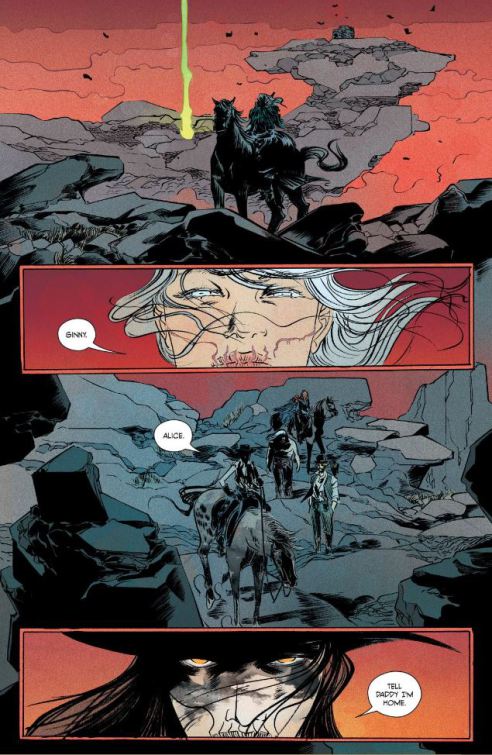 The writing is grand and lyrical, but the plot can be indecipherable even with the big expository creation myth in issue one. There’s a lot happening here, and it’s either inexplicable or under-explained. Looking back, a lot of elements happen without a real reason. Johnny Coyote lets Sissy pickpocket some “binder” out of his pocket, which happens to be the binding contract that kept Ginny from riding out after Fox, which Sissy happened to use to start a fire? Big Alice is sent by Death after Johnny Coyote and then Sissy, and ends up fighting Ginny because… fight scene? She dies in battle with Ginny, and goes through this complex regeneration process only to die in a half-hearted fight with Ginny again because… fight scene? This volume felt horribly limited by today’s comic format: the issues didn’t feel long enough to explain what was going on; the five-volume arc felt far too short to tell the tale DeConnick was trying to tell. (The last issue in particular was a rushed, muddled mess.)

But parts of the story just click really well, and the art—oh, that art! Rios has illustrated one of the best-looking comics of the decade, a staggering vision that perfectly captures the mythic and western elements. Based on this volume I would read anything she illustrates, even the phone book. There are reasons why issue one sold out at publication and had to go to a second printing. The art is beyond fantastic, the writing is lush and style is evocative as hell, and when it all comes together, you can see a brilliant series unfolding. Alas, this is not one of those comics that spoon-feeds plot to the reader; at times, I felt like it was actively fighting against me as I tried to figure out what was going on. I could also be alone on the art front; since I first wrote this review I’ve seen several people trash the comic’s art style. My enthusiasm is obviously not universal, so look at the samples here and form your own opinion.

The cover blurb describes Pretty Deadly as “the magical realism of Sandman combined with the western brutalism of Preacher,” and while that’s pretty accurate, both of those series were much more accessible and straightforward… and much less ambitious, which is saying something. Readers expecting something like The Sixth Gun or even the Dark Tower adaptations may be overwhelmed by the epic scale of its incoherent weirdness… a grand, sprawling fable of blood and vengeance. It reminds me a lot of Image’s other western about Death, East of West, another series I found a confusing read… but not nearly as confusing, or as beautiful, as Pretty Deadly. It’s a weird book that won’t appeal to everyone, because its lack of clarity can be maddening. But I love it as much as it frustrates me, and I’ll definitely be back for volume 2. For better or for worse, Pretty Deadly is one of the most uncompromising and unique visions on the comics market today.

Book Details
Do I recommend this/will I continue reading it?: It’s chaotic and kind of a mess, but it’s a beautiful mess and I’m willing to give it another go. I’ve picked up Volume 2, remaining cautiously optimistic.
Recommended for fans of: East of West, Monstress, Preacher, Catherynne Valente’s Six-Gun Snow White. People who want creative, grand, ostentatious comics that don’t hide their attempt to be deep and meaningful art, and are accepting of a layered, complex, but under-explained plot and setting.
Not recommended for readers who: value clarity and simplicity over artistic intent; prefer straightforward narratives where you’re never unsure what’s going on or why; dislike Emma Rios’ art style.
Title: Pretty Deadly Volume 1
Author: Kelly Sue DeConnick
Illustrator: Emma Rios, Jordie Bellaire
First Published: 2015
What I Read: Image, 2014
Price I Paid: $0.99/issue (Kindle/Comixology sale)
MSRP: $9.99 hc / $7.99 ebook
ISBN/ASIN: 1607069628 / B015XDAEB8