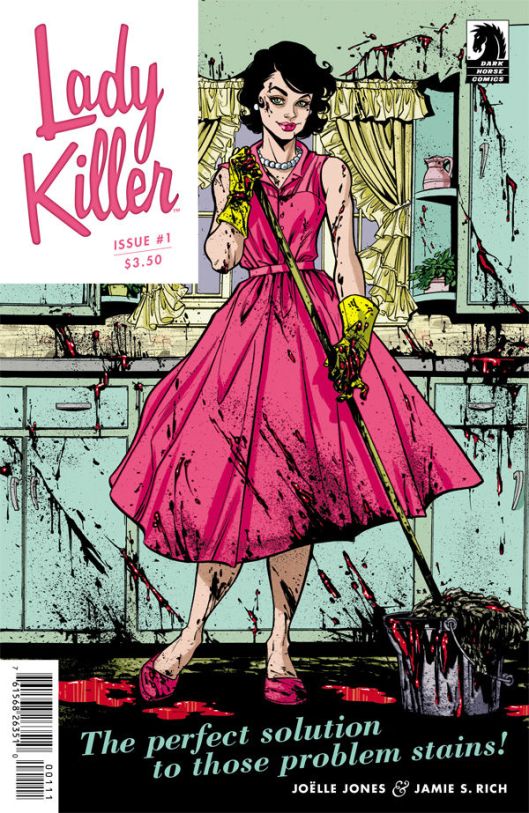 Interesting little crime comic where hausfrau Josie Schuller works on the side as a government assassin, balancing her typical 1950s home life with a secret (and bloody) career. The first two issues follow her through jobs done by-the-book; the plot picks up in issue three, where her boss essentially sets her up because her family life has been an inconvenience; she’s ordered to kill a child, with her handler instructed to kill her if she can’t follow through. And, of course, empathy wins out over killing some random kid. Josie has to go on the run from her old boss, and then take him down before he can have her assassinated. 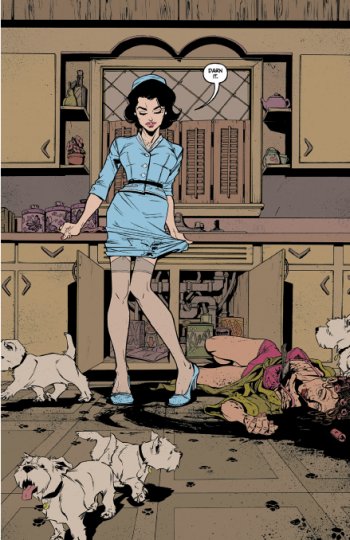 The writing is pretty good overall, though it feels like a missed opportunity to get in some social commentary digs on ’50s society. (The covers, at least, are great twists on retro advertising.) The art is really, really good–Joëlle Jones goes all-out drawing elegant mid-century fashion and covering it in blood, everything is colored in the that’s-so-’60s aquamarine and poodle-skirt pink, with a fine eye for detail.

Unfortunately, the plot is very rushed by the end, and the volume feels like it’s missing a story arc between issues 4 and 5–I had to read them both twice to make sure. Jaime Rich left Dark Horse to join Vertigo as a senior editor, and the series abruptly stopped with that, so it’s missing some of the depth and development from only having a five-issue run that ended rather abruptly. That said, the series was relaunched at the tail end of 2017, giving me hope that it’ll continue on in satisfying ways, develop the characters, and add in more social satire/commentary. I haven’t acquired it yet, but given the potential of the first volume I’m eager to read the second. 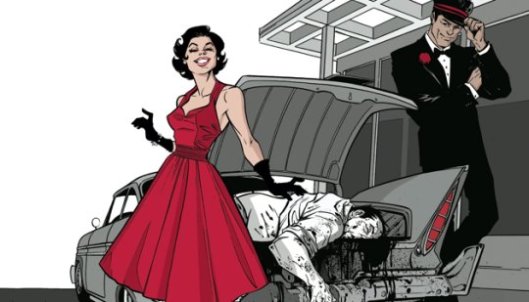 While Lady Killer starts with a promising first few issues, the rushed conclusion isn’t entirely satisfying. Still, it’s a fun volume worth reading once or twice, and did I mention the art is rather good? If you can get over the fact it ends so abruptly, and you’re a fan of noir comics, or just dig female assassins/serial killers, it might be of interest to you.

Book Details
Do I recommend this/will I continue reading it?: Hell yes. I’m putting the restarted series on my wishlist!
Recommended for fans of: Dexter, Southern Bastards, Darwyn Cooke’s Parker comics… Velvet, Fatale, or any of Ed Brubaker’s other noir/thriller comics.
Not recommended for readers who: are going to get upset when a story arc isn’t completed or ends up rushed into an unnecessary conclusion.
Title: Lady Killer
Author: Jamie S. Rich
Illustrator: Joëlle Jones
First Published: 2015
What I Read: Dark Horse, 2015
Price I Paid: $3.99 (Kindle/Comixology sale)
MSRP: $17.99 hc / $9.99 ebook
ISBN/ASIN: 1616557575 / B012GXPM7E