Important Note Dept: As you can probably guess, I’ve been a bit busy with Real Life(TM) this autumn, and while I’ve been productive at many things, I sure as hell have not been productive at blogging—I’ve been reading at a glacial pace, which caused my writing to lag as well since I need to, y’know, read things before I can review them. Rather than disappoint everyone with silence, instead I’ll just post reviews of things most of you don’t care about: graphic novel reviews and art posts! I have a bunch of short graphic novel reviews stockpiled on Goodreads and elsewhere, and some half-completed art posts I can finish up. What a time to be alive!

Outcast volume 1 set up an interesting premise of a man named Kyle fighting against demonic possession, though I felt the volume just didn’t do very much in terms of plot. My big complaint was that it didn’t feel like anything was happening or that we were learning anything helpful about what was going on. Well, in comparison, volumes 2 and 3 begin to give us something to work with here, with Kyle learning bits of info to work with. This volume has less action than the first, and the series becomes even more of a ponderous slow-burn than Kirkman’s more famous title (The Walking Dead), but it starts to dole out insights in a methodical but brilliant way. I like that it’s not rushed, especially as the danger becomes more personal and the stakes are raised. 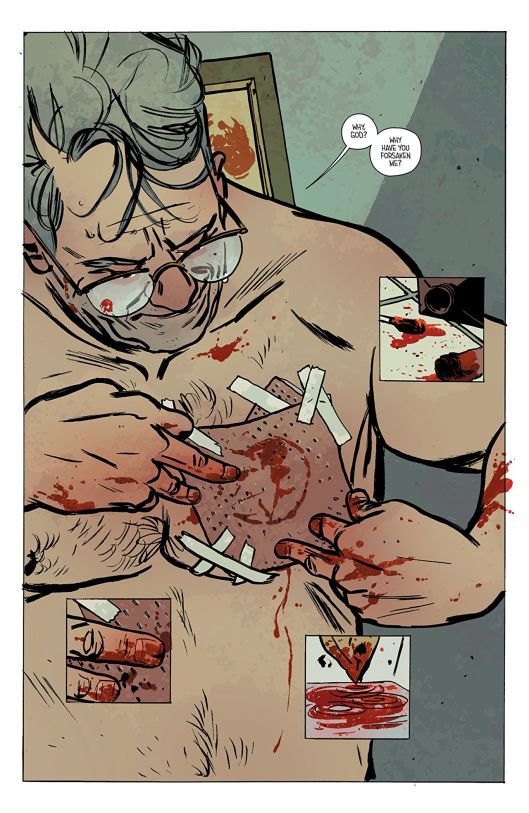 Character development is still a bit thin, though we start to learn about more people than just Kyle. His partner-in-exorcism, the local reverend, is having his faith tested from coming face to face with the mysterious Sidney, leaving him bloody and scarred. We also spend more time with Kyle’s sister Megan, and Kyle’s ex-wife Allison and daughter Amber, and get a little insight into the life Kyle lost. There’s not a lot of light in this grim world, and we still don’t have many answers—Kyle finds some jigsaw pieces but has no idea what the puzzle is a picture of. But the art is fantastic, and the slow, methodical pacing worked for me where it didn’t work for others.

I get the feeling most readers are expecting a lot more action or plot than what Kirkman has done before; TWD wasn’t really a fast-paced series, but just about every volume I’ve read can be summed up as “group finds new place they think is safe, starts to settle down, zombies attack, tragedy ensues.” By which I mean things happen in each volume; there’s a sense of progression, or at least all the gradual losses add up to something of a history. Outcast doesn’t have that same feeling since, two volumes in, its characters are still bumbling around trying to figure out what they’re up against. And while doesn’t have TWD‘s iconic characters, it also doesn’t have its repetitiveness or its brutal, senseless deaths. Outcast isn’t the horror of an oppressive, nihilistic apocalypse, instead offering the horrific frustration of fighting against something stranger, darker, and more powerful than you. If you aren’t frustrated by the slower pacing and lack of clear direction, you’ll find an intriguing and mysterious horror comic with beautiful art.