This book is written in blood.

Is it written entirely in blood?

No, some of it is written in tears.

Are the blood and tears all mine?

Yes, they have been in the past, but the future is a different matter. 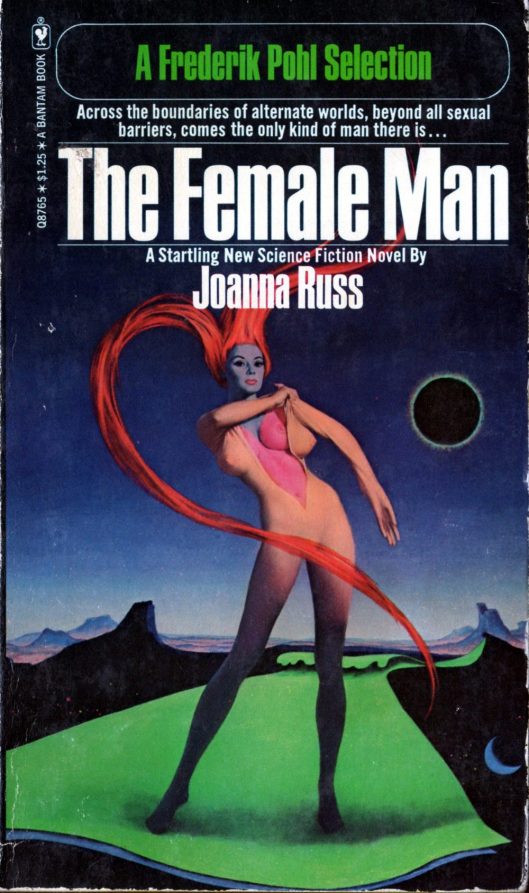 The Female Man isn’t the easiest book to write a synopsis for, because it doesn’t follow a traditional plot structure, but I’ll try. It’s about four women from four very different worlds; as the characters are drawn together, they end up travelling across their different futures and timelines, which Russ uses to examine different elements of gender:

That’s just a sliver of a long and complex novel, but the book’s point doesn’t lie in its plot. What plot it has is used to tie together examinations of these characters, their societies, and how women fit into their worlds, using these fictitious worlds as a way to examine reflections of gender in ours.

She was upset, I suppose, but you can’t imbibe someone’s success by fucking them.

Russ’ writing is some of the wittiest and most quotable in the realm of science fiction, and it’s hard not to quote some of her best passages at length. Her structure, though, is so choppy and fragmented that at times it’s an absurdist jumble; the plot jumps between characters and timeliness, where a single-sentence chapter abuts a massive journal entry discourse written in emotionally charged fragments. That chaos seems intentional, and it’s often quite effective, though it can make getting a grip on the novel a challenge. I’m not even sure I could call it a novel, though I guess it fits all the requirements. But at points I found myself thinking of it less as a novel and more like a philosophical debate or discourse, an ontological argument by way of science fiction. Just the label of “science fiction” alone is a trigger that can cause readers to suspend their disbelief a little more, expecting time-travel and various futures; Russ uses that to combine a journey through inner space and multiple impossible possibilities with a biting analysis of gender roles.

Now, the elephant in the room: The Female Man is the landmark work of feminist SF, from the time of radical and angry Second Wave Feminism. For sure, it’s an angry book, one that’s keen to list out the many indignities and injustices that come with being a woman in a man’s world. All of her male characters are non-participants, just caricatures and stereotypes filling up the background, all of them cut from the same cloth of unpleasant character traits: they’re domineering, or demeaning, or get aggressive or abusive when they don’t get what they want. The theme I found most affecting and eloquent was the Joanna character’s fight for individuality and personal value in a world where women are categorized as either mother/housekeeper or lover/sex object, yearning for a role model to show her it’s okay for women to be something more:

At thirteen desperately watching TV, curling my long legs under me, desperately reading books, callow adolescent that I was, trying (desperately!) to find someone in books, in movies, in life, in history, to tell me it was O.K. to be ambitious, O.K. to be loud, O.K. to be Humphrey Bogart (smart and rudeness), O.K. to be James Bond (arrogance), O.K. to be Superman (power), O.K. to be Douglas Fairbanks (swashbuckling), to tell me self-love was all right, to tell me I could love God and Art and Myself better than anything on earth and still have orgasms.

Being told that it was all right “for you, dear,” but not for women.

Being told I was a woman.

At sixteen, giving up.

Or her railing against gender norms, ones I’d say are now-outdated except there’s still a struggle for women in STEM careers:

Everyone knows that much as women want to be scientists and engineers, they want foremost to be womanly companions to men (what?) and caretakers of childhood; everyone knows that a large part of a woman’s identity inheres in the style of her attractiveness.

So, no, it’s not a particularly happy book. I can see male readers interpreting it as a direct attack on them, “another angry feminist venting their frustrations and anger on men,” though as a dude I never once felt that Russ was attacking me personally; rather, she attacks the inequalities and injustices and double standards that marginalize women. It’s easy to have a knee-jerk “not all men!” reaction to her complaints without acknowledging that the issues exist (e.g. “no, not every man is abusive to women, but the majority of female victims were abused by men.”) And while a lot has changed since the book was written—a list of “male-only” careers includes roles increasingly held by women, and Russ’ take on trans women is problematic at best. But much of it is still relevant today, where its statistically less likely for for a woman playing a round of Russian roulette to die (1 in 6) than it is for her to be sexually assaulted in her life (1 in 4). Russ expected (or at least hoped) things would change, based on a conclusion that casts the book off as a historical artifact that confused youngsters would read and dismiss as unwarranted anger. Not quite there yet.

So, The Female Man is a tough, demanding book to read; it offers a bitter and oppressive look at gender, though I can’t say it’s lost either its relevancy or its bite over the past four decades. It’s one of those books that isn’t something you read to experience a story, but something you read that gives you ideas to ponder. It’s a witty, surreal masterpiece—imagine if Kurt Vonnegut was a pissed off feminist and you can start to imagine what The Female Man is like. It’s not a perfect book, and it’s a demanding, challenging read, but it’s still a landmark novel both as a work of feminism and as a work of science fiction. The Female Man is still required reading for science fiction fans today; love it or hate it, it offers up a valuable perspective and commentary that isn’t always offered (or heard) in the genre. And if you like trippy, cerebral, postmodern novels that challenge you to think, boy is this the novel for you.

As my mother once said: the boys throw stones at the frogs in jest.

But the frogs die in earnest.

See other perspectives at Couch to Moon, Martin’s Booklog, or The Ringer Files.