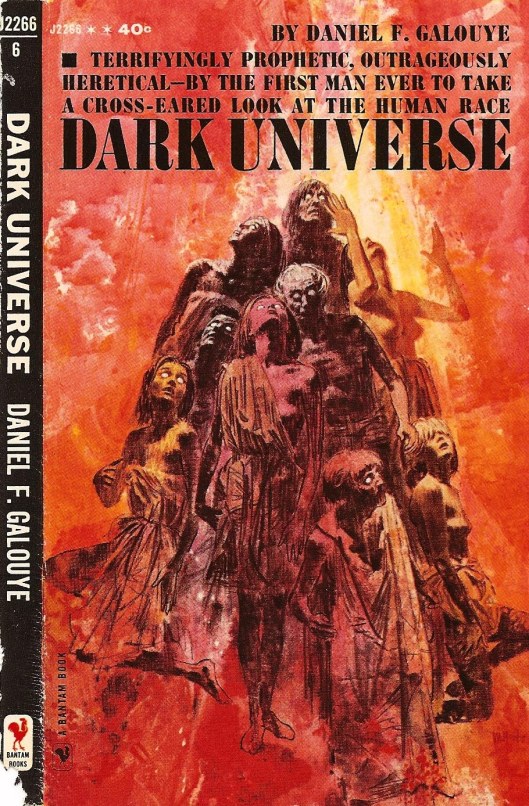 Deep underground, as far from the Original World as possible, live the Survivors: here they make do eating manna plants and raising herds of salamanders, sheltered from Radiation—the ultimate evil—and its twin devils Cobalt and Strontium. That is, until the plucky youth Jared passes beyond the barrier and ventures into the Original World looking for the mystery of Light. What follows him back to his home are strange monsters, bringing with them a terrible screaming silence. Chaos erupts in the underground grottoes; the Survivors’ faith in the holy Light is tested as people begin to disappear and their hot springs run dry. Jared begins to question Darkness itself as his world falls into chaos. Together with his Unification mate, Della, Jared will trek back and forth across their underworld, arriving at a final revelation of Light and Darkness that will shatter the fragments of their world.

If you can’t tell from the setup, Galouye has taken Plato’s “allegory of the cave” and used it to frame his post-apocalyptic novel. But the author gave himself the daunting task to devise a world that exists without the concept of light—or darkness, despite existing entirely in the dark—and the way that he introduces these concepts through a protagonist who has no way to define them is just masterful. Instead of “seeing” things, Jared’s fine-tuned hearing leads him to “hear” his environment. And that paradigm is flipped on its head when Jared first encounters light, which enables him to “hear” silence. That’s something he struggles to understand, a concept he muddles through to arrive at the book’s climax… and it never felt too forced or fake. The world-building in this novel is staggering, and that’s really its selling point: a quest for enlightenment in the form of a literal search for Light, set in a pitch-black world where echolocation and infrared vision are the only understandable norms.

The novel also examines religion and religious understanding; Jared begins the novel understanding “Light,” “Darkness,” and “Radiation” not as tangible possibilities but as spiritual truths (and as epithets, which Galouye is more than a little heavy-handed in overusing as such). Light and Darkness have become synonymous with good and evil, and the many demons of Radiation—such as the Twin Devils Cobalt and Strontium—haunt the nightmares of the world below’s inhabitants. Jared is his society’s counter-culture rebel, bucking the established dogma by seeking Light and Darkness not as a spiritual revelation, but as physical elements of the world; the poor boy finds them in the end, even though they’re not as tangible as he expected.

I can say the world-building was excellent, and that the writing was capable-to-good, but overall it had the feel of a juvenile or YA novel. It’s a pretty straightforward adventure tale when you boil it down: angsty teens running around caves, fleeing from monsters, rejecting their ancient superstitions/religions and shifting paradigms, the usual. Which is not to say that it’s bad or tacky, since it is neither, but it’s refreshingly simple compared to the more convoluted, complex plots of today’s apocalypses. The characters run the gamut of stock tropes, and using “Light! Radiation!” as obscenities got my eyes rolling after a while. The gender politics are also very ’50s; Jared and Della follow that age-old trope where they begin on the wrong foot, bicker for a while, but eventually fall for each other due to True Love (which from what I can tell is just “constant proximity,” plus the fact he’s the protagonist and she’s pretty).

My bottom line, though, is that Dark Universe is a fast, fun, and fascinating read: as an SF adventure story, it’s rather pedestrian, one of dozens of post-apocalypses that littered the Cold War. As an allegory for an arduous search for enlightenment, and its (literally) painful consequences, it’s excellent, aided by some of the most vivid and inspired world-building I’ve seen in a while. Just when I thought I’d seen everything ’60s SF had to offer, Dark Universe is a fresh injection of brilliant creativity. Despite its flaws I found it a very enjoyable read, and while may not wow every reader there’s a good chance it’ll entertain fans of ’50s-’60s post-apocalyptic or adventure SF.