In the heyday of horror—the late 1970s through the 1980s—Robert McCammon was one of the biggest names in the genre. He established a devoted following with works like Swan Song, They Thirst, Stinger, The Wolf’s Hour, and Boy’s Life, but stopped writing in the early ’90s due to creative differences with his publisher over his historical novel Speaks the Nightbird. After a decade-long hiatus of depression and soul-searching, McCammon returned and saw Nightbird published, beginning a new series starring troubleshooter/detective Matthew Corbett in colonial America. And now we finally see his return to the horror genre: the weird western novella I Travel by Night, followed a few years later by SF/horror novel The Border. 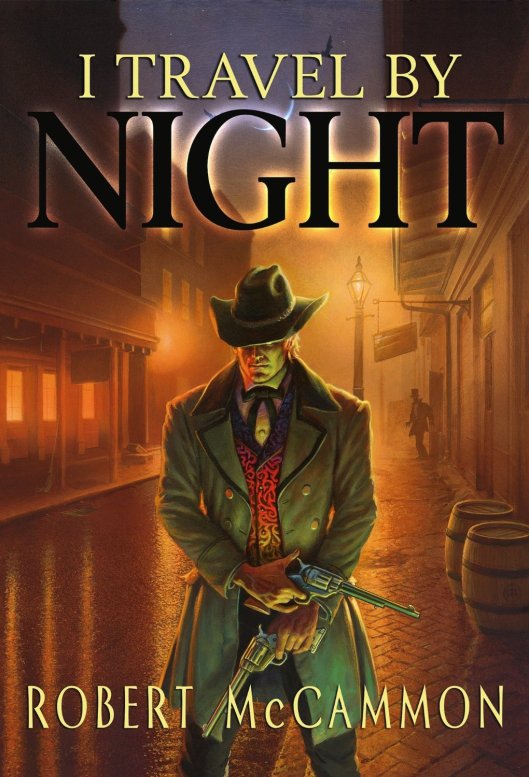 Nothing in life prepared Trevor Lawson for the horrors he saw on blood-soaked swamps of Shiloh. But the battle was only a prelude of horrors to come: vampires feasting on the dead and dying soldiers, led by their queen LaRouge, who decides to turn the dying Lawson into one of her blood-drinking brood. Disgusted, he rebelled and fled to New Orleans, where he now resides as a kind of supernatural troubleshooter: “All matters handled,” reads his calling card, along with “I travel by night.” That’s when he’s approached by David Kingsley, whose daughter was kidnapped and is being held for ransom. His directions: bring $666 in gold coins in exchange for his daughter’s freedom… to be delivered by one Trevor Lawson. Lawson knows it’s a trap, but it also may be his only chance to get at LaRouge—and by killing her, there’s a chance he may regain his lost humanity. For this glimmer of hope, he travels deep into the bayou towards the swamp-sunken town of Nocturne, preparing for battle.

I admit that the “weird west” genre is a guilty pleasure of mine, and McCammon delivers—he has a good eye for details and speech that feels authentic and not like some modern novel dropped into a dusty old setting. In many ways, I Travel by Night reads like one of the author’s Matt Corbett historical novels with more supernatural elements, and I could see it having begun life as an attempt to take Corbett’s series in a new direction. The supernatural and horror elements, though, are quite pronounced; it’s nice to see McCammon writing horror again, but it feels somewhat like a transitional work back from the historical fiction side.

One of the things that always bugs me about supernatural novels with vampire protagonists is that, with their new supernatural superpowers, the protag spends so much time whinging over their lost humanity. To his credit, McCammon gives a great sense of what Trevor has lost—his family, the need to eat and drink, the pleasures and flaws of humanity slipping away or turning to ash in his mouth. Lawson is well-characterized though these humanizing elements, as well as his flashbacks to his vampiric origins at Shiloh—in fact, most of the characters are evocative and well done, though a few lived a bit too long in stock stereotypeville.

I Travel by Night is a fun and entertaining novella, but due to the brevity of the novella format, there’s not a lot of room for deep characterization or growth here. Parts of the tale—the tense action scenes, some of the intricate descriptions, and many of the ideas—are impressive, but overall the writing wasn’t McCammon’s sharpest. To be honest, I Travel by Night almost felt like a draft: a good start left unpolished and short, and suffering from a few editorial slips in the early chapters. It also feels like a toe-in-the-water return to horror compared to The Border, which was more of a full-bodied return to the genre. If I sound a bit down on it, consider the high bar set by the author’s other works… and if this one sounds entertaining, give it a read, it’s a fun way to spend two or three hours. Die-hard McCammon fans will find a lot to enjoy, though newcomers may wish to start with the author’s best: Boy’s Life, or possibly Swan Song.

5 thoughts on “I Travel by Night – Robert McCammon”