Edwin Charles Tubb was never one of the most famous SF authors—at least not here in the States—but he was one of the most prolific. The author of over 140 novels and 230 shorts and novellas, Tubb was the kind of prolific pulpster we just don’t see any more. Michael Moorcock blessed him with the cover blurb “His reputation for fast-moving and colourful SF writing is unmatched by anyone in Britain,” and it’s true, Tubb excelled at fun SF adventures. He’s most famous for his 33-volume saga of Dumarest of Earth, following Earl Dumarest on his search for clues leading to his lost homeworld. I haven’t been able to commit myself to reading the entire series, but you can see a few reviews over at Schlock-Value and MPorcius Fiction Log. 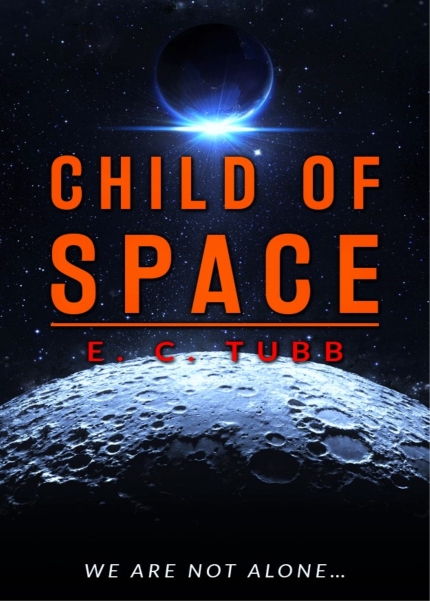 Future scientists have carved Moonbase One out of lunar rock, a miniature section of Earth with its own living centers, gardens, everything necessary to support humans in space. A home away from Earth, the first of its kind as an experimental research base. But a strange object appearing on their scanners threatens to destroy their new way of life. Commander Mark Regan isn’t sure what the object is, but it’s on a collision course with Moonbase One; in desperation, the object is hit with a missile and nudged off course, crashing harmlessly on the lunar surface. But the question remains—what is it? A meteorite, an alien ship, the seed-pod of some foreign plant? And moreover, what was the object carrying? But while the object’s passenger is a threat to Moonbase One’s security, it pales in comparison when the alien “seeds” begin to grow…

Space opera was Tubb’s bread and butter, and this one is no exception; he’s a capable writer, here penning a tale of terror on the moon. The publisher, Venture Press, is promoting this as a “never before seen novel from master of the genre,” and I lunged at the chance to read a new novel by the late E.C. Tubb. (Especially since I just read the Schlock-Value review I linked up above.) There aren’t any details included on when it was written, or even if it was completed or still a rough draft; if I had to hazard a guess, I’d say that Child of Space was a rewrite or unsold manuscript from when Tubb was writing Space 1999 novels—it feels very much a product of the mid-late 1970s, especially with some of its gender roles, and there’s a much larger cast of named characters than in your typical pulpy novel. At the least, Tubb must have been inspired enough by that series’ moonbase to borrow the idea as a setting.

Child of Space is a pretty decent adventure novel, solid and well-rounded if uninspiring. I’m not sure it ranks up there with Tubb’s best, but it still makes for a few hours of good reading. Tubb crafts a straightforward narrative, but here and there displays flashes of his skill, especially when the monster itself is revealed—it’s a scene rich in tension, grabbing my attention from its vivid immediacy. Most of all, I assume this—and Venture’s other “never before seen” Tubb novel, Destroyer of Worlds—will be of some interest to Tubb’s fans; I also think that that Tubb’s an author rife for rediscovery,  and I’m glad when he recieves any attention since it will put a few of his books into the hands of future fans.