It’s surprising to think how far the British Library Crime Classics line has come. The early releases—three books between 2012 and 2013—didn’t even feature the vibrant color scheme and artwork now associated with the books. It existed a bit under-the-radar until December of 2014, when their release of J. Jefferson Farjeon’s Mystery in White became a runaway holiday success. The Christmas mystery flew off the shelves, attracting a wider audience than just Golden Age mystery fans. Because of its success and the attention it brought, the Crime Classics releases were doubled in 2015, re-introducing more authors and even branching out into original anthologies of classic mystery stories.

But who was J. Jefferson Farjeon? A dominant force during the Golden Age, who wrote over sixty novels between 1924 and the time of his death in 1955. Dorothy Sayers called him “unsurpassed for creepy skill in mysterious adventures” as several of his novels involved supernatural themes, or were early thrillers in the John Buchan vein. But with his novels long out of print, he remained something of a forgotten figure known only to more studious Golden Age fans and historians. That’s what makes the wild success of Mystery in White so intriguing; a forgotten novel by a forgotten author, not tied to any new movie release and selling largely by word of mouth, selling out at Britain’s largest bookseller and the world’s largest online book retailer. Whatever the reason, I’m very glad it became a bestseller and catapulted the line to success.

It all starts on a train, now snowbound and forlorn on a cold Christmas Eve. With the train going nowhere, one car’s passengers decide to risk trekking across the open tundra to reach the nearest train station. But in the white-out, all they find are a series of ditches, and eventually a house—its door unlocked, tea boiling on the stove, fireplace roaring with warmth, and not a soul around to answer them. Trapped in the house is a neat group of characters: a platinum blonde chorus girl; aristocratic (and argumentative) siblings David and Lydia Carrington; aspirational but fever-ravaged clerk Robert Thomson; elderly bore Mr. Hopkins, droning on about his time in the Yukon or India; and Sir Edward Maltby of the Royal Psychical Society. Somewhere, also, is the reason behind the abandoned house: the people who abandoned it, perhaps a murderer or two…

Farjeon’s writing is sharp; this novel has plenty of witty wordplay on display and an air of amusing joviality. Overall, it’s an easygoing and fun read, thanks in part to Farjeon’s prose—he is quite capable of grabbing your attention and keeping it, especially with several thrilling developments that occur early in the novel. His characterization is quite good, and the main group of characters is well-drawn, though there’s a troubling undercurrent of classism. One stranger that they bump into is immediately identified as a “Cockney,” which also paints him as the villain of the piece—not because he’s the only person around, but because he’s one of those dreadful commons—and the characters make several catty references to those less witty and refined as themselves. And while Farjeon starts off so well—the idea and first half-dozen or so chapters are excellent at drawing the characters and setting—his plotting wears thin when the dénouement stretches on, and ends up about twice as long as it needs to be. 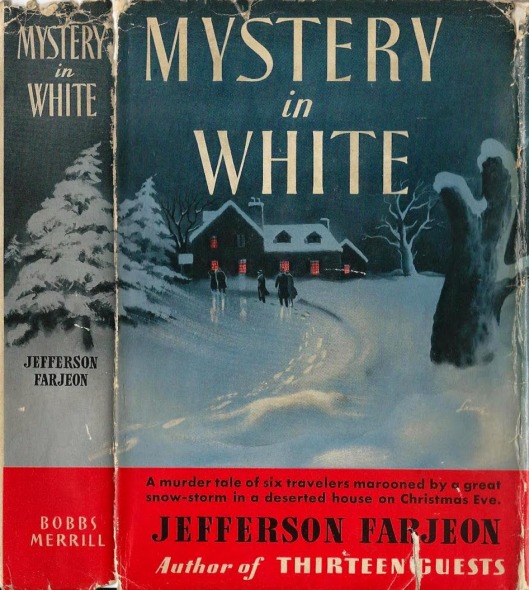 Mystery in White also adds a supernatural elements via Maltby of the Royal Psychical Society, becoming not just a Christmas mystery but also something of a Christmas ghost story. Maltby is the investigator who susses out the who’s and why’s, but I found him very obnoxious as a character—he would routinely interrupt and insult some characters, and his bad habit of being right all the time makes him come across as smug. While I enjoy a good ghost story, I’m less enthused about supernatural elements in what I’d assumed was a straight-laced mystery—after all, isn’t there a reason supernatural explanations were considered a no-go by the Rules of Fair Play? When it’s heavily implied that Maltby’s psychical potency is the source of his astute observations, and thus the source for his solution, I’m inclined to roll my eyes—it’s a bit too silly for me.

Perhaps I’m being a bit too hard on the novel, because it certainly is a fun, refreshing read—it makes an ideal stocking-stuffer, an amusing country house mystery that happens to be holiday-themed. It’s not Farjeon’s best, yet even as an average read it has a great deal of charm, and I can see why it became such an overnight sensation last year. For pure readability and entertainment, Farjeon impresses, and I’ll be sure to revisit his works as the British Library series continues to re-release them.