J. Jefferson Farjeon may be a name mystery readers recognize, after his Mystery in White became an instant bestseller in December 2014. Those record sales are in part responsible for catapulting the British Library Crime Classics series into the limelight, and causing them to increase their number of 2015 releases… including the addition of several more novels by Farjeon. It’s an odd twist of fate, considering that Farjeon had fallen into deep obscurity despite a prodigious output—he had penned over sixty books between 1924 and his death in 1955, though aside from a few reprinted in the mid-1980s, few of them remained in print. Dorothy Sayers remarked that he was “unsurpassed for creepy skill in mysterious adventures.” Yet it’s the Crime Classics series that can be credited with a resurgent interest in Farjeon, and word of mouth over Mystery in White fascinated me enough to try another re-release, The Z Murders. 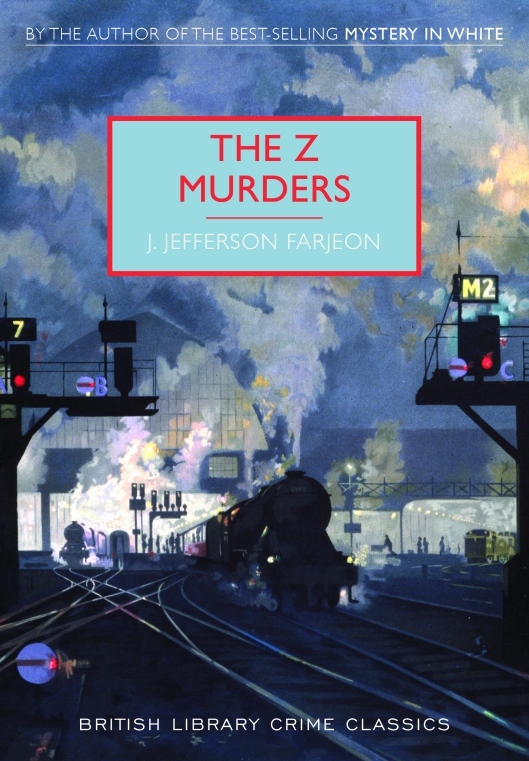 British Library Classics – 2015. Perhaps my favorite of their covers this year.

As Richard Temperley rode the night train into London, he wished his onerous traveling companion dead. Fate had put them together in the same cabin, the aging man whose incessant snoring keeps Temperley awake, though their arrival at the platform causes Temperley to hope he can escape to some semblance of solitude. Alas, the disagreeable snorer follows Temperley to the same hotel, both having the idea to doze in the hotel waiting room until a room becomes available at 8am. But Temperley is rudely awaken by a sudden realization: the man’s snoring has stopped—because he has been shot. The only clue to the crime is a crimson piece of enameled metal in the shape of a “Z.” The only other suspect is a beautiful woman whom Temperley had passed when he entered the waiting room.

The police aren’t after Temperley per se—they’re after him because of his good old-fashioned honor, as he refuses to condemn a mysterious woman (Sylvia Wynne) to police inquiry and suspicion without first hearing her side of the story. With that, he and the police-inspectors compete for the same prize—to learn Sylvia’s secret and catch an even more mysterious killer. When Temperley finds her bag at the first murder scene, giving him clues to her location, our amateur hero is off on an overland trek, full of twists and turns and a developing romance between Richard and Sylvia. It’s a little far-fetched, but it is very much a Golden Age trope, so I’ll roll with it. Heading from London to the English countryside gives the novel plenty of charm; it’s also interesting to see the novel start as a more urban mystery before heading out into the countryside for further murders.

I have to say, Farjeon’s prose quite impressed me—it’s very lively, more so than some of his contemporaries, with a graceful flow. Farjeon has a distinctive sense of humor, but his writing can be quite compelling, with tense mystery at every turn. Combined with his astute plotting, I’m surprised he is not as well remembered as, say, Dorothy Sayers or Margery Allingham, since Farjeon is nearly the equal of either. There are some awkward elements to his writing—the narrator changes from covert to overt at points, intruding on the story to relay information and display some of Farjeon’s humor. But overall the novel is a gem. So not only is it well-written, The Z Murders is fairly tense and compelling, a Golden Age thriller I found hard to put down; in particular, there’s a car chase following a race-to-a-train that I found hard to put down… especially when the car chase ends on yet another mysterious murder. Farjeon keeps up a brisk pace as both Temperley and the killer race to their final confrontation.

It’s easy for me to see why Mystery in White became such an overnight success, rocketing an overlooked and long out-of-print author onto the bestseller lists: I imagine its writing is comparable to the excellent Z Murders, and it’s a seasonal Christmas mystery to boot. The Z Murders strikes me as the work of a neglected master, perhaps the distillation of everything good in a Golden Age thriller: strong prose, a stronger mystery, good characterization and dialogue, and a tense, compelling story. Of course, readers accustomed to the modern definition of “thriller” may find it shockingly—maybe refreshingly?—clean and old-fashioned, but it’s a treat for vintage mystery fans. The Z Murders is a better thriller than the few John Buchan novels I’ve read, and a mystery on-par with the aforementioned Sayers and Allingham, with a similar (but unique) humorous charm. I will be giving Farjeon higher priority when picking golden age reads.