I know I’ve said this before, but “Brett Halliday” was a pseudonym—an extensively used pseudonym, taken up by the men who wrote the Mike Shayne mysteries. Mike Shayne was once a giant in the genre, perhaps the most popular series detective ever, with 77 novels, 300+ short stories, a mystery magazine, a dozen films, radio and television shows, a few comic book appearances and even a play to his name. Mike Shayne was the everyman detective, the P.I. who would go on to influence dozens of series detectives, from Mike Hammer to Shell Scott and beyond. While not as well-defined as those characters, or as the Nero Wolfes and Ellery Queens who came before, calling him a “generic” or “vanilla” detective overlooks his strengths: the Shayne novels set the mold for the everyman detective, the iconic and omnipresent hero who starred in novels from 1939 until 1976 (and short fiction through 1985).

In the interest of full disclosure, I received an e-ARC from MysteriousPress via NetGalley in exchange for an open and honest review.

Mike Shayne had just sat down with a nice cocktail when his prospective client, Phyllis Brighton, tries to throw herself out the window of his apartment. She claims that she’s crazy, that she has an Electra complex, a fixation so intense that Phyllis believes she’ll kill her mother rather than share her with anyone else—and she’ll pay Shayne if he can prevent it. Just after she leaves, Shayne is visited by another party, and he promises a hefty payday if Shayne can keep Phyllis’ mother alive. Glad to take two payments for one job, Shayne accepts… but to his chagrin, that night he finds Mrs. Brighton with a knife in her back, and a confused Phyllis standing over her corpse. Working fast, he hustles her out of the crime scene and does his best to keep the police off her trail, even as she remains the prime suspect. Shayne needs to uncover the truth of who killed Mrs. Brighton—before the detectives find Phyllis. All this while juggling another job, a seemingly unrelated search for an art collector heading into Miami hiding a potentially rare find…

And with that, we have a suitably complex plot, several sub-plots that may or may not be related—and may or may not be what they appear—and a missing Phyllis, who may or may not be crazy. Her psychiatrist all but steps out of a gothic’s mad scientist role, and everyone affiliated believes she’s snapped and done the deed, but Shayne is unwilling to let a confused client fry for something he’s pretty sure she didn’t commit. Thus, he treks up and down the streets of Miami, trying to unravel the truth—and with the subsequent murders and subplots, the truth is something that becomes less clear the closer Shayne gets to it.

I’d forgotten that the early Mike Shayne novels—the first half-dozen or so—were intriguingly odd hybrids, mixing elements of the traditional mystery with hardboiled noir and screwball comedy. The mystery is very Golden Age, down to Shayne pulling all the suspects together for the murderer’s grand reveal and dénouement, like something out of Ellery Queen or Nero Wolfe. There’s some great moments of wit and humor; one of my favorites is when two detectives barge in on Shayne, and he ends up cutting himself a sandwich using the murder weapon right under their noses. Yet there’s a distinct hardboiled edge: Shayne stays up all night drinking and smoking, shrugs off brutal beatings and four (!) bullets, and is a terrible flirt with the ladies… up until somebody barges in on him, as the books are a titch too clean for any of these romances to come to fruition. Dresser straddled the fence between the traditional fair-play whodunnit and the newer hardboiled school, and actually succeeds at doing so—it’s an odd “kitchen sink” approach, but it may appeal to both audiences.

In terms of writing, Dresser is not my favorite of the Brett Hallidays; his prose—the dialogue in particular—is often bland and pulpy, getting the point across but not creating much excitement while doing so. If you want to see why Chandler or Hammett are held up as classics of American literature, read them back-to-back with this one. This isn’t to say Dresser is bad; he has a knack for writing a twisty-turny, fast-paced mystery, and while reading Dividend on Death you’ll rarely be bored or confused. Instead, he’s a pretty good example of average writing—very pulpy writing as well, without much flair in terms of imagery or emotion. His pacing is stronger than his prose, which accounts for something. And there’s a definite charm to its blend of fair-play mystery, hardboiled noir, and screwball comedy—while it doesn’t excel at any one of those elements, it’s quite decent at all three. 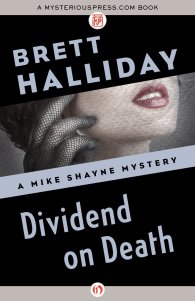 I can see why Mike Shayne became the everyman detective; this first novel is quite well plotted and has some brilliant twists, and if you like it, the ensuing 77 novels give Shayne plenty of room for growth and adventure. Shayne is a bit generic in terms of personality—what this book gives us is “alcoholic,” “dedicated,” and “detective”—and the prose is capable but unexceptional. But the tight plotting and well-done mystery give the reader a lot to work with. The use of psychological elements is also worth mentioning, not just an interesting twist for Phyllis’ character but also very much indicative of its time. While it might not be the non-plus ultra of the detective genre, Dividend on Death is a good pick for readers who enjoy a bit of action in a solid mystery, especially due to its good balance between well-plotted Golden Age whodunnit and grittier crime-noir.