I’ve always been partial to the British “holiday” over the American “vacation”—“holiday” has this unique, celebrative feel to it, maybe with exotic undertones; meanwhile, the overworked, exasperated white-collar American gasps out something like “I need a vacation.” Semantics aside, Resorting to Murder: Holiday Mysteries marks the first original anthology in the British Library Crime Classic line, a collection built around the theme of mysteries solved by vacationing sleuths and detectives. Martin Edwards has collected fourteen stories from across the Golden Age of detection—it actually may stretch the Golden Age definition to its extremes, as the collection starts with a Sherlock Holmes tale from 1910 and ends with a mystery published in 1953. 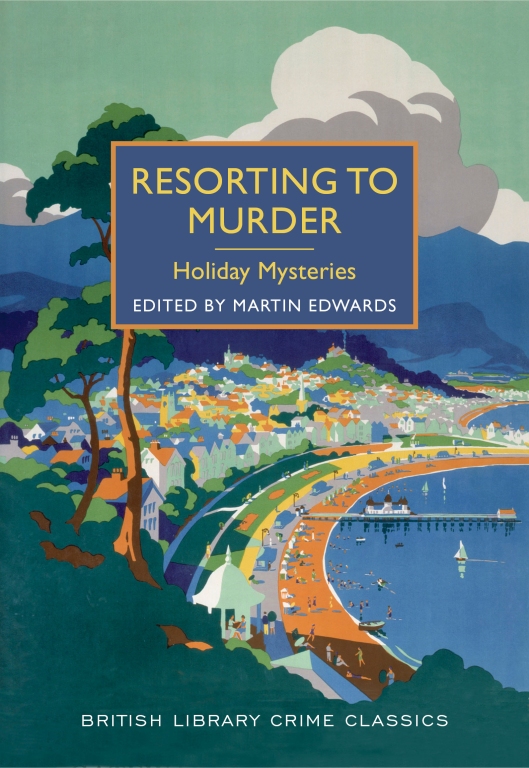 The collection begins with contemporaries Sir Arthur Conan Doyle and E.W. Hornung. Conan Doyle’s “Adventure of the Devil’s Foot” is one of the later tales of the famed Sherlock Holmes, who, despite his health issues, cannot resist being drawn in to solve a mysterious murder (though I’d hope this case taught him not to test his own theories out on himself). Hornung’s entry is one of several starring Dr. John Dollar, the Crime Doctor; while vacationing in Switzerland, he learns that suspicion of attempted murder has fallen on the very doctor who saved Dollar’s life years before. Both are models of what the Golden Age mystery would become, easy-going mysteries that hold up rather well. And while his story was penned much later than Doyle’s or Hornung’s, G.K. Chesterton was no less influential on the genre. His story here, “The Finger of Stone,” combines an almost science-fictional murder of a local scientist with a morbid impossible crime that would make John Dickson Carr proud.

Many of the authors included in this collection were once prominent in the field, and Edwards has done a remarkable job bringing them back into the spotlight. While Conan Doyle and Chesterton are still well-known, many of the authors in this book have faded into unwarranted obscurity. H.C. Bailey’s “The Hazel Ice” is one winner by a now-forgotten author; its protagonist is Mr. Fortune, a precursor to Peter Whimsey. An aristocrat vacationing at an alpine resort, Fortune learns that a tourist has become separated from his companion by a rock slide. Rushing to help, Fortune and Swiss policeman Herr Stein find themselves at the scene of a murder, staged to look like an accident. Surprisingly modern, with an affable wit and brilliant writing, this was my favorite of the collection.

Basil Thomson’s “Vanishing of Mrs. Fraser” builds a suspenseful mystery around a young woman and her mother visiting Paris during the Exhibition; when the mother falls ill, then vanishes, the daughter’s pleas for help leads to a detective uncovering a dark secret… The story’s core is a common urban legend that’s been re-used in several other novels and an episode of Alfred Hitchcock Presents, though the well-drawn Parisian atmosphere makes Thomson’s version quite good. M. McDonnell Bodkin’s “Murder on the Golf Links” is a delightful murder-mystery set at a golf resort, where a love triangle’s friction may have lead to murder; R. Austin Freeman’s “A Mystery of the Sand Hills” is an ingenious tale of a missing beachgoer, whose appearance—and killer—are reconstructed by way of astute scientific detection. Any of these should prove excellent reading for the Golden Age fan.

Not all stories are about detectives; several deal with the criminals needed to produce the mystery’s murder. Is murder ever justifiable? Do crimes ever go unpunished? Michael Gilbert’s “Cousin Once Removed” sees a man, in impoverished desperation, plot to kill his cousin in order to receive a shared inheritance. The method of murder he hopes to use is ingenious, as is the surprise ending. “Murder!” by Arnold Bennett sees an altercation come to a head between a vacationer and his nemesis, both in love with the same woman—one is her abusive husband who refuses divorce, the other her young suitor. A well-drawn story, it balances a cutting wit with a little paranoia, and I found it very entertaining. There’s even a haunted house tale: Gerald Findler’s “House of Screams,” proving that a ghost story can have both fiendish supernatural horror and a logical explanation behind it all.

Themed anthologies are a tough balancing act: make the theme too broad, and there’s not enough to tie the collection together; make the theme too niche and you may end up struggling to find enough quality fiction, or end up with sixteen versions of the same story. While I enjoyed the iconic “murder on holiday” theme well before starting Resorting to Murder, I was half worried that there wasn’t a diverse enough pool of mysteries behind it to fill an entire collection. I’m glad to say that I stand corrected; I’ll try not to doubt Martin Edwards in the future. The fourteen stories in Resorting to Murder are all very good, and while some of them seem similar this is quite a diverse collection. All of the stories may deal with murders on holiday, but there’s enough kinds of mystery story here to keep the collection fresh and invigorated. Not only did Edwards pick a great batch of stories, he also continues to write excellent introductions for the British Library volumes. While I found a few of the tales forgettable or not my cup of tea, there’s not a stinker among them, and several stories lead me to new authors. Short fiction is an interesting new avenue for the British Library to pursue, but after this volume, I’m confident that they will continue their winning trend.

Resorting to Murder is already available in the UK; the North American release via Poisoned Pen Press is 2 June 2015. I received an eARC in exchange for an open and honest review, thanks to NetGalley, Poisoned Pen Press, and the British Library.