Charles Kingston O’Mahoney is another mystery author from the genre’s Golden Age, who’s since slipped through the cracks of history; Kingston wrote 25 mystery novels between 1921 and 1945, but not much else is known about him. First published in 1936, Murder in Piccadily falls somewhere in the middle of that bibliography, and it is currently Kingston’s only novel in print thanks to the British Library Crime Classics series (distributed via Poisoned Pen Press in North America). Like others in the series, it comes with excellent cover art—a re-purposed London travel poster—and an introduction by Martin Edwards. I’ve been very interested to read some of the British Library’s rediscoveries, and am very grateful that I received an advance review copy from the publisher and Netgalley in exchange for an open and honest review. 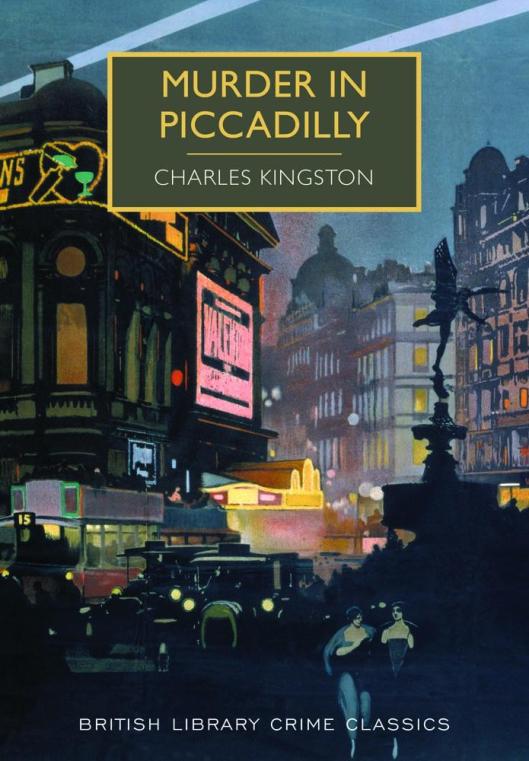 British Library – 2014. Like many of the line’s striking covers, this one was originally a London travel ad.

Robert “Bobbie” Cheldon lives the life of the idle rich—though, while he’s perfected the “idle” and remains unemployed at the age of 23, he hasn’t worked out the “rich” part yet. Instead, his doting mother brought him up a gentleman in poverty, expecting a flow of wealth from the death of his miserly uncle, Massey Cheldon. Massy’s very much alive and in the peak of health at fifty-three, living in control of an estate that brings in ten thousand quid a year. (However, he may be willing to find his nephew a fifty-shilling-a-week clerk’s job.) Unfortunately for Bobbie, he’s smitten with a dancer named Nancy, and she refuses to marry a pauper—she wants him to be the wealthy gentleman he’s always claimed he will be, and demands he obtain his inheritance. Worse, Bobbie’s fallen under the sway of one Nosey Ruslin, Nancy’s theatrical agent hoping to profit from Bobbie’s relationship woes and wealthy uncle. And soon, Massy’s life will end on a crowded platform of the London Underground, the killer pursued by Scotland Yard’s Inspector Wake.

I expected Murder in Piccadilly to be a whodunit, but it’s not that type of novel. Most Golden Age mysteries begin with the murder and leave who did it and why as the mystery, but Murder in Piccadilly does not rush to bloodshed. Instead, the first half of the book is spent establishing these characters and their motivations; around the halfway point, we follow Massy’s last day of life and see it snuffed out by a scoundrel’s dagger. From there, it’s more in line with a suspense/thriller, where Inspector Wake starts his investigation and the situation looks bleak for the characters (and for good reason). Kingston took a cynical view and most of the characters are not likable—Nosey, Nancy, and Billy Bright are rather unsavory, passionate only in their greed for Massy’s wealth, and I wanted to see them caught as much as I wanted to see the miserly snob Massy dead—but I did have a passing sympathy for Bobbie, blinded to sense and logic because of his love for Nancy. I assume calling him the childlike “Bobbie” instead of the more mature “Robert” is a cultural thing, but I found it apt: it reflects his naïve and inexperienced demeanor very well.

Kingston writes well enough, and displays a jovial wit at times—that aforementioned chapter following Massy around on his last day has a brilliant ironic undertone. I’d rank him as a journeyman writer; no master stylist, but a man with a firm grasp of setting, character, and some very readable prose. The plotting is pretty good as well, though the setup probably won’t please puzzle lovers—there is no real puzzle as the culprit and motives are established before the murder, and Inspector Wake acquires a lot of clues without doing a lot of investigating. I actually enjoyed that element of the novel: framing the characters, establishing motivations, and seeing the seeds of murder take root. And near the end, there are several twists I didn’t see coming that threw me for a loop—Kingston did a masterful job preparing some real surprises.

Murder in Piccadilly is a fascinating piece of mystery history, a look back to the London of the 1930s. It’s not the typical whodunit and its lack of a puzzle may disappoint readers looking for that element in their Golden Age reads, instead being more of a murder-mystery and dramatic study of some unscrupulous characters in their quest for greed. The characters in particular are well-drawn, and Kingston displays some skill toward making his misanthropic creations unique and interesting. If you don’t mind the slow scene-setting, or the 1930s pacing and prose, it’s a very enjoyable read. Perhaps not the best of the genre, but a good second-tier novel that may be of interest to vintage mystery readers. I’m glad it’s been saved from falling into obscurity by the British Library.