Ramona Stewart may be best known for her novel The Posession of Joel Delaney, filmed in 1972 starring Shirley MacLaine. Most of her novels later in life featured the supernatural or occult, though her first work—“Bitter Harvest,” a serial in Collier’s—was a kind of small-town melodrama and borderline noir. The serial became the novel Desert Town, and it too was filmed, becoming the 1947 flick Desert Fury starring a young Burt Lancaster, Lizabeth Scott, and Mary Astor. The film often shows up in noir film lists as a deep cut—John Grant‘s authoritative Encyclopedia of Film Noir calls it “steamy good fun”—but the novel from which it originated has remained a relatively unknown, until Raven’s Head Press reprinted it as their second title. 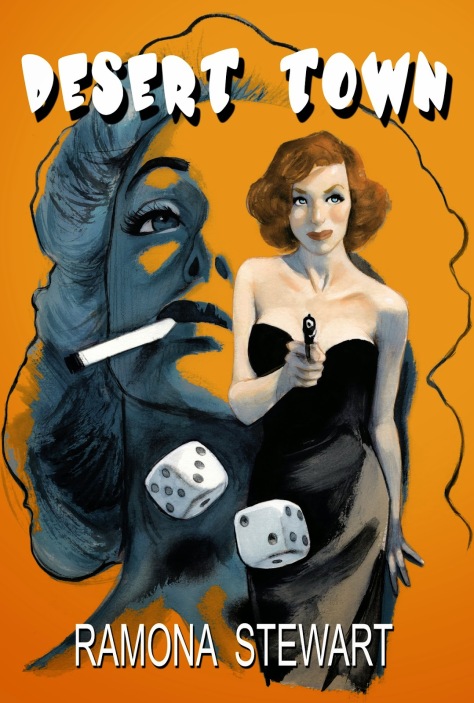 Fritzi Haller came to the desert dying of TB, but it was there that she really lived. Her husband—now deceased—was a bootlegger back in New Jersey, and it’s clear Fritzi’s career was not quite legal. She left that life behind to start anew, bringing her daughter and maid to the dry desert air to recover. Now, she’s the dominant force in a corrupt but growing town, owning an illegal casino, liquor store, and several bordellos down in the slums. The police and judge are on her payroll, and the town turns a blind eye to her illicit gains in favor of progress.

Paula Haller is Fritzi’s seventeen-year-old daughter, blossoming into womanhood under the watchful eye of her domineering mother. Growing up in the shadow of Fritzi has given her an independent streak, but she remains naïve and innocent to the reality of her mother’s dark secrets, as Fritzi keeps the messy details far from her daughter’s attention. Paula’s the mascot of the town sheriffs, friend to the crooked judge who’s made a fortune buying up prime real estate as the town grew. Everything in her life changes when Eddie Benedict and his pal Johnny, two big-shot racketeers, roll into town; Paula falls hard for the forty-something Eddie, and against her mother’s orders, establishes an ongoing affair with him. Johnny is less than pleased about this development; same for Fritizi, and Luke, the only decent lawman in town who keeps a close eye on Paula. This troublesome relationship with Eddie will either kill Paula, or become her redemption… 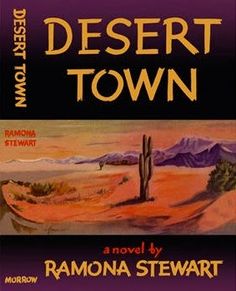 My, this novel is an odd duck. It has a typical Western setting, doused in shades of noir—corrupted authorities, marriages strained over illicit affairs (or assumptions thereof), a sadistic lawman, a hotbed of sin and villainy. There’s some elements of 1940s “women’s fiction,” and it has a “coming of age” plot, and a lot of melodrama—Cullen at Pulp Serenade dubbed the film “soap noir” (soap opera noir), and the book fits that mold as well, a garish study of amorality in a picturesque setting. Just about every character is built with flaws to spare, usually marital trouble or alcoholism, and the deeply entwined relationships between the characters creates a tangled web of trouble.

What makes the story unique is who those love affairs and dalliances are with. The core love triangle isn’t between two men over a girl, it’s between Paula and Johnny over Eddie. Paula is drawn to Eddie’s good lucks and personality, a bit naïve in falling for the bad man from outside of town; Johnny needs Eddie as his partner in crime, and even went to jail for the crime Eddie committed. Johnny acts like a spurned lover, insulting Paula in an attempt to drive her away. Never mind that Eddie’s far too old for her, or that other townsfolk have warned her away from this bad egg; she’s drawn to him despite Johnny’s threats. In this case, it may have been wise to listen to everyone else in the world, and Paula realizes that very late in the game when she notices his violent temper. Then she ponders the implications of Eddie’s first wife’s violent death—a car crash at the local bridge…

That love triangle not as homoerotic as it sounds—instead, the relationship that is pretty homoerotic is between cowboy sheriffs Pat and Tom. These two are always working out reasons to get away from Pat’s wife and sleep out in the desert under the stars (…). See, Pat is enthralled by rodeo stars, which Tom was until a steer trampled his stomach; that starry-eyed appreciation is more than enough for Pat to overlook Tom’s sadistic streak as “boys being boys”-type shenanigans. One of the best moments early in the book are when some characters discuss a drunk who died in jail; we readers know Tom questioned him to death, playing with him like a cat plays with a mouse, but the townsfolk are used to this kind of “accident” and are unperturbed. Hell, the book opens with Tom drawing down on a wild bronco that threw him once too often—Tom is not the kind of sensible, level-headed lawman you’d want to have guarding Mayberry. 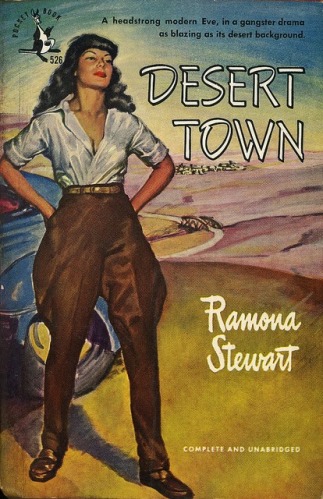 Stewart’s prose tries hard to be lyrical/poetic; at times it comes close to greatness, and other times descends to become overwrought and purplish. It echoes the desert setting with flashes of scenic beauty mixed with spacious openness, rams it home through characters who speak in Western drawl. The core of the story—Paula coming of age thanks to a naive love affair with a gangster over twice her age—is well-drawn, and the characters are vivid, but I never found myself entirely hooked by the ambitious novel. The plot moves at a steady clip, but it wasn’t often that I was enraptured by the busy melodrama, and didn’t feel much in the way of tension or suspense. It could be that I’m less affected by small-town melodrama, and the annoying OCR-scan grammatical errors that kept bringing me out of the narrative didn’t help, but the novel just felt a little lacking to me.

Desert Town is a unique book, a hybrid of small-town soap opera antics with a noir flourish in a western setting. There’s a certain strength to it that will appeal to readers, and Stewart’s penned a competent story. While it never fully engaged me, it was an interesting and entertaining read, and not without merit: it’s probably best read as a study of morality—rather, amorality—and its consequences. There’s not much here for a fan of outright mysteries, and it’s more noir-lite or pseudo-noir than the average hardboiled novel. Desert Town is an interesting curio that I’d rank around average, though I am glad Raven’s Head Press has reprinted it so that us collector-/historian-types can read said curio. If the story sounds interesting, by all means give it a shot; it’s not a half-bad book, and it’s one of the more unique books lumped in the noir category.