D.G. Compton is not as well known over here in the States, and I have the feeling he’s still not a common enough name to most UK SF readers either. I heard about him years ago, when first Ian Sales and then Joachim Boaz started raising Compton awareness through some pretty heavy praise. Most of Compton’s novels are from the late-’60s, early-’70s, of which The Continuous Katherine Mortenhoe and Synthajoy are cited as classics, and the former is in the SF Masterworks collection. Still, when I decided to read something of his it was when I bought his second novel, Farewell, Earth’s Bliss, on a whim: a SF Gateway price-cut, putting their D.G. Compton ebooks at $1.99 for a couple of days. The blurb, and reviews from a few trusted sources (“Top. Men.”), was incentive enough. 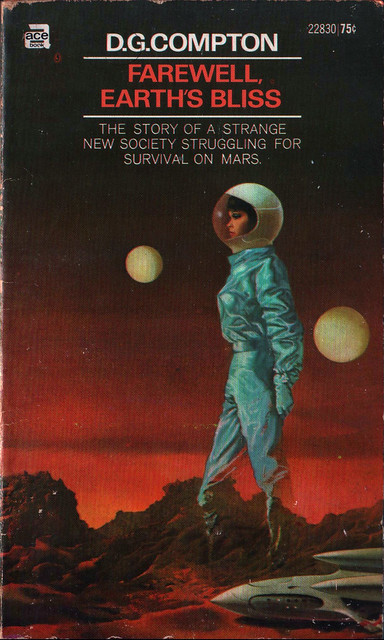 Aboard an obsolete ship, three months from home, twenty-four convict-colonists complete a one-way trip and arrive at their new home: a desolate penal colony a world away from lives and homes they will never return to. But the condemned weren’t shipped off to Devil’s Island or Botany Bay—no, these are political prisoners, homosexuals, and a scattering of outright criminals sent to the cold and distant sands of Mars. The novel is more character-driven and thus lighter on plotting; it follows how these convicts integrate into the Martian-exile society and come to terms with their disconnect from Earth (and, sometimes, come to terms with themselves).

All of the characters are given “new” but generic biblical names, as some symbolic rebirth; for the most part, they are deep and complex characters who develop and change over the course of the novel. Our cast includes:

The core of the novel is built around these characters: first isolated in a small spaceship, their food drugged by their jailers, with nothing to do and nobody to talk about it with. When they make land after the interminable trip, the Martians make contact and dispose of their drugged food, only for the newcomers to become trapped in their ship by a blinding sandstorm. Their ranks thinned, they are then thrust into Martian society and its lone settlement. Led by a Governor and Assistant Governor, the Martians live in the hulks of their own transport from Earth, re-purposing the old spaceships into homes to raise families. They grow some of the Martian lichen for sustenance and hunt “rabbit,” the main native Martian fauna (the name is a misnomer—it’s some kind of mammalian worm). Religion, of a repentant Christianity variety, is the major social and psychological community in the settlement. And while there’s no issue intermingling whites and blacks, homosexuals are not tolerated, instead taking the “cold way out.”

I find it hard to review the novel’s thin plot because it would reveal too many secrets that are worth discovering. I’m not talking about the character who is secretly gay, or the “Miracle” observed outside the settlement. The depth to the settlement’s new society is the thing worth finding—reflecting its razor’s-edge situation and grim origin, some convicts hoping for the future and having kids, others pining for a kind of redemption. The complex character interactions as the cast is introduced is what I mean, a tapestry of individuals thrown together, their only common bond is that they now exist outside of society are have to start anew, have to find something to live for. See what I mean about this book being more cerebral and contemplative? The back blurb even calls it “quasi-Kafkaesque,” which I think is spot-on.

Going in I knew that Compton was a serious SF author; as should be explained early and often, he doesn’t write with concerns for genre SF—less about the technology or world-building or sensawunda, his focus is more cerebral, more literate. As with his other works, Compton presents moral dilemmas, examining human relationships and behavior as the characters undergo the most stressful situation of their fictional lives. As Science Fiction: History, Science, Vision puts it, Compton’s work has an “acute and subtle moral sense which avoids the extremes of satire and sentiment while compelling us to see the world ethically.” His writing is the gold standard for compelling readability, inserting short sentences (often near the end of chapters or paragraph breaks) that carry more weight than the floweriest, most purple descriptions ever could. I see why he has gained such ardent followers, because really, he’s good enough to be a household name.

I should mention that, with at least one racist in the group, the book is a bit un-PC; several characters drop the N-word, and the society’s open about its homophobia. Compton makes it clear that his support is with these groups, in his gentle and sympathetic handlng of their characters, but I figured to give fair warning.

Compton’s adept characterization and vivid depiction of desolate isolation makes for an excellent novel. It’s not a long book, and I found it a fast read, blazing through it in a couple of hours. Readers who prefer strict plotting and plenty of action may find it lacking—it’s a book where the big action moments are the realizations these characters come to, the deaths, the integration into Martian society, all coming full circle with another shipment of convicts arriving in the  last chapter. In that quantity, Farewell, Earth’s Bliss is an excellent read, a novel of staggering complexity and powerful emotion that belies its reserved appearance. It may read like a postcard from 1966, but those sensibilities plucked from the late-’60s/early-’70s is part of its charm. Recommended for any reader of ’60s/’70s social science fiction, or anyone who wants a strong, character-driven novel. Based on Farewell, Earth’s Bliss I have to agree that Compton is indeed deserving of increased popularity these days. Add him to the list of “authors I need to read more of.”