Cyril M. Kornbluth is one of the more tragic figures in the realm of forgotten/under-appreciated SF. A member of the New York-based Futurians, slumming around with the likes of Isaac Asimov, Damon Knight, Fred Pohl, Judith Merril, James Blish, Hannes Bok (illustrator), Donald Wollheim (editor of Ace/DAW books), and many other early science fiction luminaries. He wrote fifty-six short stories, and co-wrote novels with both Judith Merril (Outpost Mars, Gunner Cade) and Fred Pohl (The Space Merchants, Search The Sky, Gladiator-at-Law), establishing himself as one of the most witty and canny SF social satirists of the 1950s.

The tragic part is that he’d contracted hypertension during the War. One snowy winter in 1958, he shoveled his driveway en route to interview for an editor role at The Magazine of Fantasy & Science Fiction, raced to make his train, suffered a heart attack and died on the station platform, 34 years old. Kornbluth is now often overlooked, his works now forgotten, to say nothing of the potential future brilliance he could have done as writer and editor. I’ve been impressed by many of his collaborative works and short stories, so I wanted to see how his solo novels hold up. 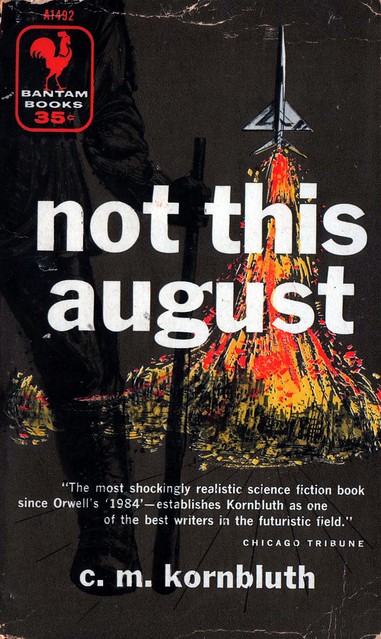 April 17, 1965. The United States and Canada have been at war with the Soviets and Chinese for three long years. Europe and Latin America have fallen to the Communist forces. America holds the Sino-Soviet forces at the El Paso line; Canada launches yet another offensive in the north. American society is a mockery of rationing and want—a radio news bulletin notes 784 traitors executed for treason, such as an 87-year-old grandmother who gave food to her grandson after his desertion, before announcing “substitute chocolate” available in a “big, big half-ounce bar.” Things are bad. They only get worse when the United States admits defeat and capitulates.

Billy Justin was a Korean War vet and freelance author, but when the Farm-or-Fight law hit, he chose to run a small dairy farm over the draft. He struggled to meet his quota under the American government, and does the same under Soviet occupation. When he takes on a crazed boarder—a former Pentagon official suffering from nervous breakdown—Billy learns of lost state secrets, that the real Yankee Doodle weaponized satellite was not destroyed by Chinese special forces and in fact sits in near-completion just a few dozen miles from his house. Sucked into a resistance movement he hoped would take this satellite off his shoulders, Billy may well have discovered a means for the world to free itself from Communist rule.

Kornbluth excelled at social satire, and while the plot becomes an inevitable “find the resistance and overthrow our evil oppressors,” Kornbluth subverts it through the less-than-heroic Billy, and an ending that merges zen and pacifism. The book is rich in jibes and critique (if you couldn’t tell from my mention of the radio announcements): there’s a rich blend of wry commentary first on the rationed, war-bound United States, and then on its North American People’s Democratic Republic successor. Kornbluth can be very bitter and pessimistic, and his black humor cuts like a knife. Other times, his humor is grim and unrelenting, such as the long lists of local farmers executed for minor crimes against the state. Some of it is hyperbolic or hysterical, other parts eerily accurate.

Not This August is very much a product of its time, a melange of Cold War paranoia and atomic age fears; I assume Kornbluth’s experiences in World War II were influential as well. While it stumbles in a few places—a bit too hyperbolic here, a bit too much a product of its time here—and while Kornbluth’s acerbic wit will not be appreciated by all, the novel holds up well. It doesn’t feel like a dated piece of propaganda like Red Dawn thanks to Billy Justin—part pragmatist, part coward, “hardly a hero” per the back cover. There are elements that felt unrealistic—the Sino-Soviet forces have enough troops to occupy the entire world, and the Canadian-American forces don’t seem to have intervened until the enemy was knocking at their front door. But it offers a fascinating slice of rural/domestic life, and then underground rebellion, in the wake of a Communist occupation.

Not This August is a fine piece of ’50s SF social satire, if very bleak. It’s a time-capsule back to America’s Cold War fears and woes, written by one of the most underrated and forgotten authors of the 1950s. That’s who this book is going to appeal most to—readers whose preferences slant towards Cold War paranoia, near-apocalypse and occupation, and biting social commentary. It’s an imperfect novel, but still a pretty good one. It offers a disturbing look not just at the American will to be free, but also at the military-industrial complex and the insanity of endless war, the race to mutually-assured destruction. There is no happy ending to this story, even though Billy and the rebels get everything they want—and that is precisely Kornbluth’s point, something I think was overlooked or missed by the reviewers who criticize the zen ending. Not This August can be read as a Red Dawn-type adventure, but at heart it’s anti-war—hence the bitterness in Kornbluth’s prose.

The book was released in the UK as Christmas Eve, a password that becomes the unifying call of the rebellion. It was also revised in 1981 by Kornbluth’s friend Frederik Pohl; while Pohl was probably the most qualified person to do so, I’m not sure I agree with revising someone’s work after their death.

12 thoughts on “Not This August – Cyril M. Kornbluth”