Leigh Brackett was the queen of pulp SF. She started writing adventure stories in 1940, but her first novel in 1944 was a mystery, No Good from a Corpse. As legend goes, Howard Hawks was so impressed by it that he asked for “this guy Brackett” to write a screenplay of The Big Sleep with William Faulkner. Today she’s more famous for her screenwriting career working with Hawks—most of them westerns or noir, old John Wayne flicks like Rio Bravo and Hatari!, but also the first pass of The Empire Strikes Back for George Lucas, the only time she worked on an SF film. Those screenplays diverted her focus from science fiction, though she did return in the early ’70s to write the Skaith novels before succumbing to cancer at the age of 60.

The Secret of Sinharat is a novel expanded from one of her ’40s novellas, 1949’s “Queen of the Martian Catacombs” for the Planet Stories pulp. Everything points to her husband, fellow SF writer Ed “World Wrecker” Hamilton, as the source of the revisions, especially since Brackett was busy writing screenplays at the time. There’s enough differences to make Sinharat and “Queen” their own distinct works, but the core of the novella is alive and well in the short novel. 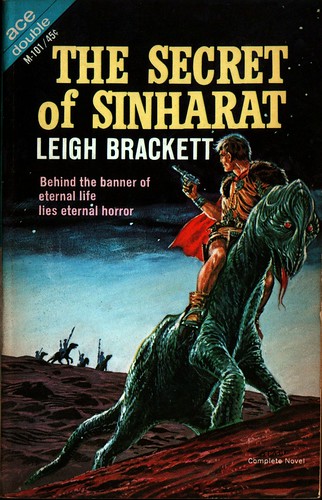 Eric John Stark finds himself trapped on the Martian desert, his mount dying of thirst, men of the Earth Police Control hot on his heels. Led by Stark’s foster-father, Ashton Simon, the police are on to Stark’s purpose on Mars: they know he was hired by a revolutionary to train an army of drylander barbarians and low-canallers, they’re aware of the coming revolt against the Martian city-states that will cause rivers of blood to flow in the streets. But since they cannot intervene in Martian affairs, they need Stark to become a double-agent and shut this revolt down, and Stark finds himself working to diffuse the very revolution he was hired to instigate.

Playing the game of bluff and double-bluff will be easy for Stark. Finding one of his fellow mercenaries is an old adversary, Luhar the Venusian, is only a passing concern. Nor are the grudges of the rebel lieutenants, one of which has an addiction to radioactive rays that bring out mindless, primal savagery. No, the trouble comes from the revolutionary leader, who claims he’s found the secrets of the lost Ramas of Mars—long-dead immortals thought close to godhood, with incredible powers like the ability to transfer minds between bodies. Because there are long-dead secrets on this planet many would kill for, and legend of the Ramas’ extinction may be greatly exaggerated…

Brackett’s prose is unmistakable; it’s full of vigor and wonder, and it’s no surprise she influenced dozens of authors (such as Michael Moorcock, who wrote a glowing introduction). She transmutes the California of 1940s literature into the red planet Mars—the seedy underbelly of the Martian city-states could be the San Francisco streets trafficked by Dashiell Hammett and Raymond Chandler; her unforgiving Martian desert is the same type of rugged frontier she brought to life in Howard Hawks’ westerns. The twists, the thrills, the adventure are all here. Regardless of the flaws of the planetary romance sub-genre—of which they are many—it makes for excellent entertainment. Really, there is no finer practitioner of SF adventure than Brackett: her tales echo Burroughs’ Mars, but have a uniqueness all their own.

The Secret of Sinharat is a good example of why Brackett’s fiction surpasses much of the pulp adventure of her time: elements of revolution and postcolonialism add extra depth to this story. The Martian revolt centers on the groups living in the shadow of the ruling city-states, drawing immediate comparison to the African states gaining independence in the early ’60s; the underground revolt is trained by grim mercenaries and led by a die-hard idealist reminiscent of Castro or Che. These themes would have been relevant and topical when novelized in 1962, but they were part of the story back when it was a 1949 novella. Brackett’s women are femmes fatale—sexy, dark, and dangerous, not simpering cliches in constant need of rescue. Stark is an anti-hero, and I can’t recall many anti-heroes before the ’70s… Yet you can picture him in some alternate universe played by Humphrey Bogart, grinding out a cigarette stub in the sands of some dead Martian sea.

The Secret of Sinharat succeeds because of Brackett’s compelling prose and rich atmosphere. I could argue that The Sword of Rhiannon is her best sword-and-planet work, but I can’t really fault Sinharat; it’s a solid adventure yarn made better by its depth. Characterization and plotting is still pulpy—that is to say, thin and straightforward, respectively—and Brackett’s tales are dated, an acquired taste at best. But if you’re in the market for adventure, Brackett is among the best practitioners of that art. Moorcock makes a persuasive argument in his introduction that Brackett raised the bar for space opera, and I’m inclined to agree with him. An enjoyable old-school romp.

10 thoughts on “The Secret of Sinharat – Leigh Brackett”