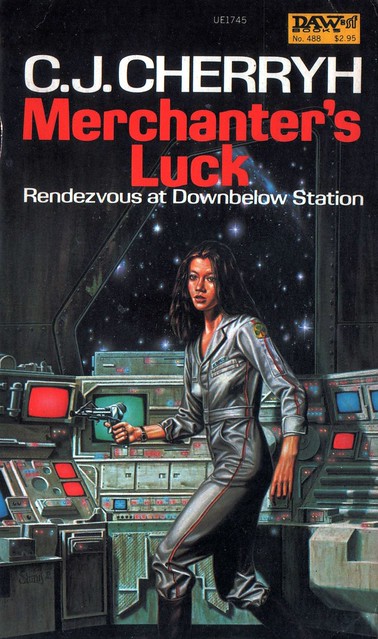 Sandor Kreja is captain of his own tramp-freighter, a vessel that’s seen its share of wear and tear. The vessel was home to the Kreja merchanters before a ship of the Earth Company ran her down to press-gang any able-bodied inhabitants, an act which lead to a massacre of the Kreja family. Sandor was one of three survivors, and after some bad turns, he’s now the only one left. But he’s not losing control of his ship. Scraping by on the wrong side of the law, he takes on short-term crew and runs under false papers, making quick dockside deals and fast-talking his way out of one sticky situation after another.

Allison Reilly is a proud junior officer struggling her way up the chain of command, princess of the famed Reilly clan of the Dublin Again, one of the most capable merchanter starships Unionside and true queen of the spaceways. All Allison’s ever known has been life within Dublin‘s hull, choked with her cousins and relatives, coming from profitable trade runs between Union stations.

One fateful late-night rendezvous at Viking Station puts the two on a collision course, a hasty bet on a race between the two ships to Pell’s Station, out in Alliance space. Sandor gambles everything after one night with Allison, flying without cargo and knowing his papers won’t stand up to Pell Station’s scrutiny. Little do they know that Sandor’s gambit, fueled by passion and alcohol, would give Allison a chance at her own command and bond their fates together when Dublin buys Sandor’s freedom in exchange for a stake in Lucy‘s future. Complicating matters is Signy Mallory, grim commander of the Alliance battlecraft Norway, who wants to use Lucy as a pawn for her own agenda…

If you can’t tell from the two main characters, Merchanter’s Luck is something of a meeting between different classes and backgrounds, Sandor barely scraping by on his own, fending off nightmares of the past, while Allison worries about competition for helm positions from her many dozens of relatives. And despite having two “main” characters, with Allison on the cover, this is clearly Sandor’s story. Sandor’s turned the ship into a mausoleum for his dead family, sealing up old segments and leaving the cabins untouched since the massacre; he clings to Lucy because it is all he has left of his past. He holds on to control over the ship’s computer because it’s one of the few links to his past, reminders of how his now-dead older brother kept him alive after the massacre.

Following in the footsteps of Downbelow Station, there’s several cameos of important characters from the earlier book, and it sure helps to know the history introduced in Downbelow going into this one. (In theory you can read any book in the series as a stand-alone, but with this one you’d better be good at learning through context.) And following on the heels of Downbelow, Merchanter’s Luck is a book about life after war: the scars the Company War left are still visible in the uncomfortable truce between Union and Alliance, in the cautious faces of the Pell stationers. Sandor spirals into paranoia between the presence of Reillys filling space that for years has been inhabited by the ghosts of Sandor’s past. And it doesn’t help that he doesn’t know which Earth Company ship was the one who ran down Lucy to press-gang any able-bodied Krejas into service. It could have been Norway for all Sandor knows, and being maneuvered into Signy Mallory’s plot triggers all of Sandor’s fears of Earth Company captains.

Interesting to me, we see yet another slice of life in the Alliance-Company ‘verse: the viewpoint of the merchanters, entire families living aboard free-trader starships, creating their own cultural identities and political faction. Other books in the series have a wider range of depth or scope, making you conscious of the geopolitical scale Cherryh is dealing in. Merchanter’s Luck has its finale, where Mallory’s maneuverings are unveiled and you see Sandor and Allison as a small part of larger events, but for the most part the book’s view is more restrained. After all, it takes place within the claustrophobic hull of an aged starship, home to paranoia and uncertainty on both sides of the uneasy partnership between Sandor and the Reilly clan. The characterization is excellent, with the characters driven by their own doubts and hopes and jealousies—they’re complex and flawed, very realistic and relatable.

At 208 pages, Merchanter’s Luck is the shortest of Cherryh’s books that I’ve read, but it holds up as well as the other tomes in the series. The story is a gem of tight-knit plotting, the characters are complex and believable, the setting has a realistic lived-in feel, and Cherryh once again shows her storytelling prowess. It’s a story of uneasy truces, paranoia, and redemption, of the underdog Sandor’s hopes and fears. And it’s a ripping good space opera of the first order, melding adventure with depth and complexity. Pretty powerful stuff from such a short book, another winner from Cherryh. Recommended.