Harry Whittington is one of the most prolific paperback writers that I’ve never read before. His bibliography is a wealth of prose, a herculean effort among paperback writers: he wrote over 200 novels, 85 of them packed into the space of twelve years. While he started writing westerns in the ’40s, the bulk of Whittington’s writing fell into the suspense, crime, and noir genres; he even did novelizations for Bonanza and The Man From U.N.C.L.E. Thus, Whittington has a well-earned reputation as a “king of the pulps” and “the king of paperback originals.”

That’s a pretty impressive output, but few of them are available today; to speak of Harry Whittington as a forgotten author is to understate a fact. Old, used copies of his paperback novels sell for upwards of $30. Roughly 10% of his books are available: eight of his books have been released by Stark House Press in their quality series of doubles and triples; four have been made into ebooks by 280 Steps; and Prologue Books has digitized another ten. Don’t Speak to Strange Girls was one of many titles provided by Prologue; I’m not sure what drew me to it, but I figured I had to start into Whittington’s works somewhere. 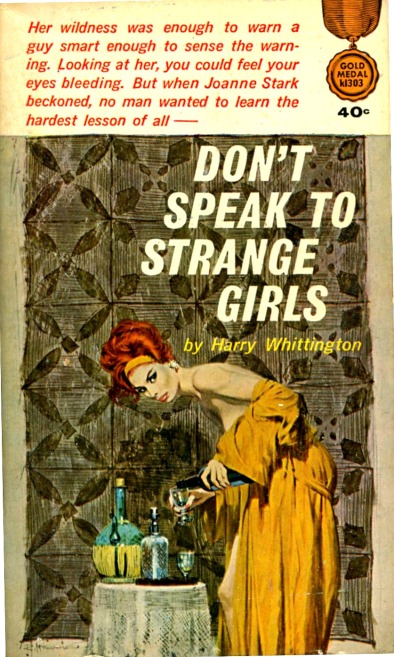 Gold Medal #kl303 – 1963 – the unstoppable machine that was, is, and forever will be Robert McGinnis.

It’s only after the death of his wife Ruth that Clay Stuart realized his life has meant nothing. The couple were unhappily distanced, and it’s not like Stuart lacked money or power—even pushing fifty he’s still “Big Daddy Sex” to his legions of fans, one of the most powerful and respected actors in Hollywood. But his perspective has changed after Ruth’s passing and he languishes over what could have been, every memory from his long but utterly failed marriage cutting at his soul as he retreats behind a mask of stoic manliness. Clay has nowhere to go, and refuses to turn to anyone for aid.

Clay Stuart’s career is left by the wayside despite pressure from his only real friends—his agent, manager, and secretary, watching the tortured man suffer in silence. Thinking of ways to get him out of the rut, they take Clay to his old haunts, yet his past hobbies of hunting, fishing, and womanizing fail to pull him out of his misery. And that is when Clay’s troubles really begin: when he becomes acquainted with Joanne Stark, Clay moves from depression to complete obsession. Is he finally recovering from the finality of his wasted marriage, a sign of Clay’s return to the real world? Or is this dangerous tramp luring him farther down the rabbit hole, the ubiquitous gold-digger his friends and family tried to protect him from…

Strap yourselves in folks, we’re still going over the setup—this is going to be a long book. Not that it’s necessarily a bad thing. The novel starts by methodically building up the characters—not just Clay but also his supporting-cast friends—showing the reader his depression in the aftermath of a rotten marriage. It’s less a crime novel at first and more a drama or character study. Whittington writes so damn well that it’s an acceptable sin and I think he did a masterful job setting the scene and building the characters. Other readers, however, may find it a bit tedious, so don’t go into the novel expecting thrills and chills for about a third of the novel.

Don’t Speak To Strange Girls reminded me a lot of Sunset Boulevard even before one of the characters referenced it; it also bears more than a passing resemblance to an inverted rendition of A Star Is Born. A Hollywood setting isn’t out of the norm for mystery, but what makes Whittington’s novel unique is its portrayal of that falling star—first depressed and then desperate, blinded to the love of his friends due to the crippling addiction to love for Joanne. All of the characters are starkly realized, deep personas with their own fears and loves and motivations. Clay’s agent, manager, and secretary are all critical characters who stand on their own well, but chief among them are Clay and Joanne, as it’s their relationship that forms the bulk of the drama and tension.

What makes it interesting is that it was one of Clay’s friends who gave Joanne his number and prodded her onward, trying to cheer Clay up by pointing him at “the next woman.” Clay was always something of a womanizer, and a lot of his reminiscences are of past loves, on-screen and off; each one cuts into him, reminding him of a passionate flame his dead wife never kindled. What was meant as a well-intentioned fling to cheer Clay up becomes the potential for Clay’s downfall. Clay swings like a pendulum back and forth between love and hate for Joanne, never quite able to avoid either the physical or emotional damage she brings, never strong enough to escape her gentle caress.

There’s a strong underlying theme of age. Clay’s daughter Sharon is a young debutante off at a New England college with some unresolved (if understandable) daddy issues; she’s pining for a divorcee almost twice her age. That fact makes Clay grind his teeth; he fears of a future with Sharon at thirty, wed to a decrepit old man of fifty—a man who’s already soiled by divorce, has already married and cast aside one wife. Yet Clay’s relationship with Joanne is a mirror image of that fear: he may be a widower rather than a divorcee, but he fills the role of mature man with Joanne as the nubile youth. The twist is that in their relationship is that it’s not a case of cradle-snatching: instead, it’s the dangerous young woman who has the lonely old man wrapped around her finger, and he remains desperate to keep her before she finds someone else her own age.

Let’s be clear, here: as I’ve already pointed out, the book is a very slow-burn, and is more of a human drama than a crime caper. For Don’t Speak To Strange Girls, those are not flaws, they are the book’s assets. Whittington’s more-than-capable prose drew me into the story and kept me reading, and I was rewarded with rich, deep characters caught up in a tense struggle of human drama: a battle of love. In this case, it’s whose love is stronger—Clay’s love for Joanne, Joanne’s lust for fame, or the love of Clay’s friends and family for the broken and obsessed actor. It’s a fight between Clay’s internal selfishness and his self-sacrifice. It’s pretty compelling stuff. 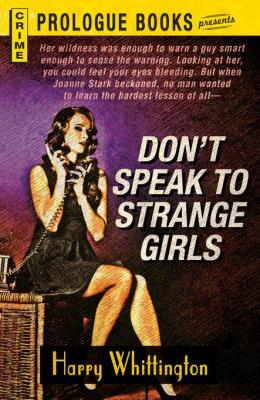 So this, then, is Harry Whittington, king of the paperback originals: a well-written and compelling novel, with a subtle, deliberate pacing that belies the emotion seething beneath the surface. Judging by this book, I could fare to read a lot more of Whittington’s works. The writing is smooth and steady, the plot clever but insightful, with the universal theme of human emotion tying it all together. I can see the pacing and focus not appealing to every reader, but I found it tight-knit and powerful. One of the best novels I’ve read so far this year.

Odd Trivia Dept. – Clay Stuart was one of the many, many pseudonyms Whittington used over the course of his career, in specific for some of his softcore sleaze novels. Making him into the protagonist of another novel—a protagonist with the nickname “Big Daddy Sex” no less—is a giant in-joke that all but the keenest readers miss.