Of all the forgotten writers I’ve discovered, E. Howard Hunt is one of the best; Hunt is more infamous than famous today from his role in the Watergate scandal, but in the ’50s and ’60s he was a prolific writer of mystery, spy, and crime fiction. Later in his career Hunt was less prolific but still churned out novels—under numerous pseudonyms, a result due to the restrictions working for the CIA—and so he adopted the nom-de-plum Robert Dietrich for selling paperback originals such as the Steve Bentley series. One of his few series characters, the hardboiled Steve Bentley is a CPA from the Washington, D.C. area who becomes entangled in mysteries; there are ten total Steve Bentley novels, of which this is the eighth. 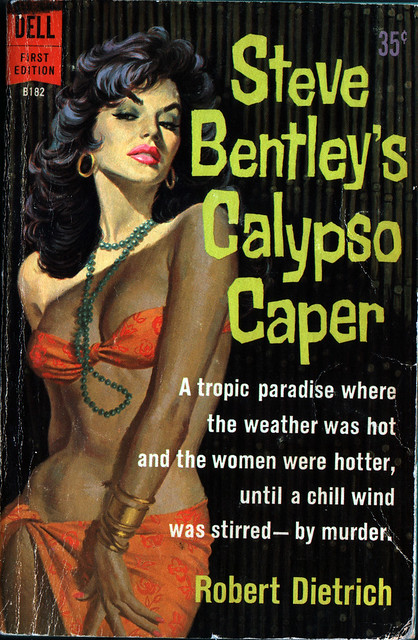 Dell B182 – 1961 – cover by Tom Miller. The poor girl with the impressively frightening hair has her style seriously cramped by cover text, including a title looks like it was cut out by a kindergartner.

Steve Bentley isn’t your typical private eye as a Certified Public Accountant. I know there’s been plenty of detective-style novels featuring lawyers—Perry Mason was a defense attorney, after all, as was Mickey Haller, the Lincoln Lawyer—but I haven’t heard of any other novel series’ following a CPA track down murderers. In this novel, Bentley heads down to the Caribbean to deal with one of his clients, wealthy Virgin Islanders living on Saint Thomas who have some land investment deal going. When Bentley arrives, he finds out that one of the old casino operators from days gone by, Victor Polo, washed up in a fisherman’s net the previous night.

Hunt wastes no time on this one; within a few pages, we’ve met all the key Islanders, learned their secrets and relationships, watched them bicker, of which there’s enough to form a soap opera or two. But Victor Polo wasn’t the only corpse in this novel; soon enough, Bentley’s host Sonny is the chief suspect in the murder of a popular nightclub entertainer—and island gossip has spread the word that Sonny was putting her up in beachfront property, paying her expenses. Despite their rocky marriage, Sonny’s wife Allegra commissions Bentley to do what he can to save her husband and find the real suspect. With that we’re off on a layered murder-mystery with plenty of suspects and plenty more potential murder victims.

It goes without saying that genre fiction written when my parents were in grade-school is going to have a different viewpoint from modern readers and writers; that’s particularly true here. Not just in the views of women—the femme fatale Bentley bumps into is a “pistol-packin’ redhead” who’s decided to hate men today—but also in the views of minorities; the islander “Negroes” are treated with a bit of distaste, speaking in stereotype Caribbean, and the dead entertainer is referred to as a “mulata,” something I haven’t heard used outside of Civil War period pieces. A bit disconcerting, at least.

Bentley is a pretty macho dude for a CPA; he gives a few good swings in the novel, but truth be told, he’s no noir superman. He takes a sap to the head enough times for his periods of unconsciousness to be measured in days, and quips along the lines that his skull appears to be held together only by aspirin, rum, and blood. He doesn’t have a large threat to face, though there is an expansive and layered mystery to uncover. Most of it deals with the complex -relationships of the island dwellers that borders on the soap-operaesque. I mean that in a good way, the intricate relationships, the sordid pasts and twisted futures of people trapped together on a small, wealthy island.

For example. Victor Polo once co-ran the island’s casino, though in the mad dash from the authorities his partner double-crossed him. Said partner owns the island’s main nightclub, the one where the now-dead singer worked, and was formerly married to the daughter of one of Sonny’s partners; Sonny’s other partner is a icy-cold millionaire who’s out for the “pistol-packin’ redhead” Bentley’s after. You get the picture; there’s a lot of suspects, and it’s up to Bentley to find the motive buried within that web. It’s plotted much liked an old-school whodunit—the use of characters and their relationships feels traditional British mystery to me—though Bentley acts and talks in hardboiledese, and given the abuse his head withstands I’m inclined to agree with him.

Steve Bentley’s Calypso Caper is a simple potboiler, and it doesn’t have the same level of craftsmanship as Hunt’s earlier works. That said, it’s got enough stylistic flair, high-octane twists, and layered mystery that make it a perfect page-turner. There’s nothing within its pages that you haven’t already seen, though Hunt’s execution is enjoyable; his prose is superb at times, reminding you that he beat out Gore Vidal and Truman Capote to win a Guggenheim Fellowship. It’s the kind of book that, if I didn’t already own a copy, I’m not sure it I’d go searching for, but I would pick it up if I happened to bump into it in a used book store. It’s also the kind of book that really grows on you, with the depth and complexity of the murdery-mystery plot drawing you in. Hunt may not be at the top of his game here, but it’s still a good read, and is worth consideration for the private eye reader.