SF readers of All-Story Weekly in January of 1916 must have been in for a treat. The first issue that year saw the conclusion of Charles Stilson’s lost race epic Polaris of the Snows; featured the next-to-last installment of Burroughs’ fourth Tarzan serial, Son of Tarzan; and had the first of a three-part serial titled The Sea Demons by one H. M. Egbert. All for a dime.

The H. M. Egbert byline disguises Victor Rousseau Emanuel, an British pulp writer active in the early half of the 20th Century who wrote romances, westerns, and some of the earliest pulp science fiction and fantasy. Rousseau’s first major fantastic work was Messiah of the Cylinder (1917), a descendant of and rebuttal to H.G. Wells’ When The Sleeper Wakes; over the next few years, he wrote several pulp epics such as Draught of Eternity (1918), Eric of the Strong Heart (1918-19), and My Lady of the Nile (1921), a romance set in a post-apocalyptic New York and two lost race novels. The Sea Demons was his first serialized work, though it wasn’t collected in novel form until 1924. Since then, Hyperion Press published it in 1976, and now Singularity & Co. has digitized it in 2013. 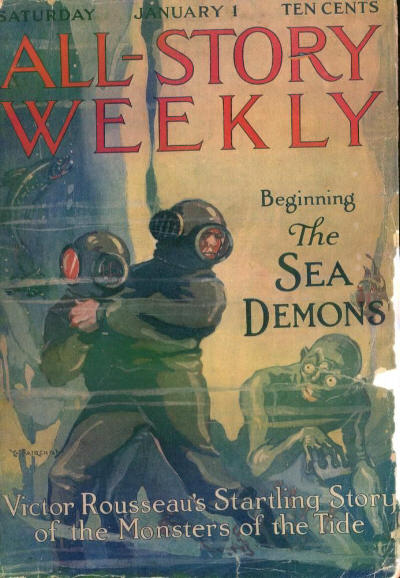 Royal Navy lieutenant Donald Paget is about to assume his first command, the rickety submarine D55, when he stumbles into his old friend Masterson at the office of the Sea Admiralty. Masterson is a deep-sea explorer who’s made some… eccentric observations of undersea life, and has now been trying to get the Sea Lords to listen to his pleas. He tells Donald over lunch that he’s discovered a strange race of invisible underwater humanoids preparing to rise up and conquer the earth. Needless to say, Donald takes this with a grain of salt. Poor Masterson’s overworked heart gives out as he tries to convince Donald of his dire warning; returning to Masterson’s house, Donald sees some strange creature kept under pressure in a huge glass tank…whereupon he’s assaulted by Masterson’s nemesis, Professor MacBeard, who tries to make off with Masterson’s findings. And with that, Donald’s off to sea—and should have heeded Masterson’s warnings.

This story’s place in time is tangible, with its scenes of submarine warfare—the D55 takes on a German pocket-cruiser that’s menacing the ship Donald’s fiancee is on, at one point. At the time of publication, World War I had spent less than a year locked in trench warfare after the German sack of Belgium and race for the sea. Submarines and underwater exploration were in their infancy at this time—no Jacques Cousteau or Bob Ballard—and the story’s sense of wonder centers around this rusty old submarine that’s still on the cutting edge of warfare. The knowledge of the undersea world is scant, but impressive. And the story’s surprisingly progressive in terms of social values, with Masterson echoing the kind of anti-war message and world unified by its humanity that people like Gene Roddenberry later dreamed of:

Who’d think or care then whether he was an Englishman or Yankee or a Dutchman; who’d trouble whether his friends were white men, negroes, Hottentots, or Chinese, so long as they were human? Wouldn’t that make for the brotherhood of man, Donald? Wouldn’t we set all our convicts free? Wouldn’t kings shake hands with anarchists and college professors with coal-heavers? Wouldn’t class and race vanish like dreams when the night’s over? And maybe that’s what God’s working for, lieutenant!

Though to be fair, the role of women—displayed in the form of Ida, Donald’s American fiancee—is horribly dated; she’s rather meek and does what’s best for England with a stiff upper lip, regardless of cost to herself and her freedoms. A bit too idealized for me, especially when she doesn’t contribute much as a character.

One of the conceits of the pulp era is that the protagonist is a superman—unhindered, unbowed, and unharmed by every new threat and cliffhanger. (I’m specifically thinking of John Carter of Barsoom; even the hint of a setback turns into one of those “Wait, look! That worked out surprisingly better this way” moments.) Donald spends a lot of time looking like he’ll fall into that mold; then, as soon as he leaves his submarine in a sealed diving suit, he finds himself panicking and lost at the bottom of the English Channel. It’s a stark little scene of terror, relaying the isolation and confusion of being lost and alone on the silent and dark sea floor. Not outright terrifying, but I found it memorable; the entire chapter is dialogue-free due to the lack of communications between the diving gear. At another time, Donald’s second in command, a 17-year-old cadet, is left to guard the submarine alone, where he breaks down and cries in the conning tower.

Meanwhile, the villain of the piece (MacBeard) is a cardboard cutout, a  respectable and lettered man of science out to destroy humanity (and Masterson’s reputation) for no apparent reason, who falls head over heels for Donald’s beloved. The supporting characters are wooden; the romance is the kind of puritan chivalry that defies belief. Most of the pacing and plotting is the chaotic jumble one expects from an art form whose structure revolves around the cliffhanger as a means for tension and plot development; I can hazard a guess as to which sections were in which parts of the serial, based on what kind of predicament the characters are left off in. Worst are the few chapters that are nothing but exposition, blunt explanations of the novel’s secrets.

Also, the science of the piece is suspect, at best. The sea devils have a natural ability to convert oxygen and hydrogen into oxygen and nitrogen, e.g., water into air. How? Who knows, but it allows our plucky heroes to converse at the bottom of the ocean, and creates some interesting situations.

Related to the cliffhangers, the story’s type changes like the weather. It starts a kind of eerie warning and mystery, with Masterson relaying his discovery. Then it’s a World War I submarine action movie before becoming an underwater nightmare. Near the end, we have an apocalyptic vision of invasion that brings to mind Wells’ War of the Worlds and the flight of the narrator’s brother from London. And, for the most part, the story does move quickly enough that the plotting and style only looks herky-jerky in hindsight. I should also mention that Rousseau’s writing style is very prim-and-proper early-20th-century British; a bit more stilted and less prone to using explanation points to convey emotional moments as, say, A. Merritt or Jack Williamson. 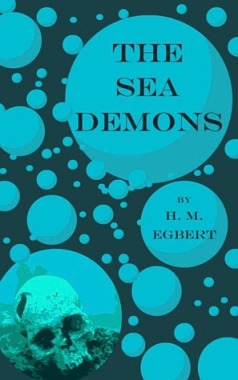 I have to say, much like with S&Co’s last pulp release, The Torch, I think I liked The Sea Demons more than I should. Rousseau’s first novel is dotted with rough patches in its plotting and delivery, and is a charmingly dated read, with its hero’s quest to save humanity and chivalric love. The science that it uses is… implausible, though at least it makes an effort to explain itself rather than hand-waving it all away. I can’t in good faith recommend it for anyone who isn’t interested in the earliest of early pulp SF, and even then, you have Burroughs, Merritt, “Doc” Smith, Cummings, … However, I enjoyed The Sea Demons despite its flaws, and hope that more Rousseau novels are saved sometime in the future.