I’ve never read anything by Poul Anderson that I haven’t liked; Anderson is a consistently entertaining author even on his bad days. He started off writing for pulps as varied as Astounding and Planet Stories as well as a long bibliography of novels that really showcase his talent: The Broken Sword, Brain Wave, Three Hearts and Three Lions, and War of Two Worlds being some of the best of Anderson’s earliest. So began a lengthy and productive career, including the gain of three Nebula and seven Hugo awards. Anderson was a jack-of-all-trades who could write a brilliant space opera, a technically sound Hard science-fiction tale, or an authentic Dark Ages fantasy with the crack of sword against shield.

Three Hearts and Three Lions falls into the latter category, a sword-and-sorcery tale featuring a modern man thrown back into a fantasy world which melds Carolingian Europe and Arthurian-style myth with more traditional fantasy elements. First serialzed in two 1953 issues of The Magazine of Fantasy & Science Fiction, Anderson returned to revise and expand it slightly in 1961, years before Tolkien became the fantasy sensation that dominates the genre today. In 2004, it was nominated for a Retro Hugo Award (novella category), but lost to James Blish’s “A Case of Conscience.”

Holger Carlsen is an average engineer but a passionate fighter, leaving his new life in the United States to return home to Denmark to fight the Nazis. A savage battle on a Danish beach knocks Holger unconscious;, he awakes finds himself naked in a massive forest, unseen in Europe since the midst of the Dark Ages, the time of Arthur and Charlemagne. Nearby is a horse marked “Papillon” with clothes that suit Holger’s massive Nordic frame, a sword and lance that fit his hands perfectly, and a shield bearing the insignia of three hearts and three lions.

Mounting up, Holger rides forth to find out about his surroundings, and discovers he’s in the disputed borderlands between the forces of Law and Chaos. Law is represented by the realms of men, with the Holy Empire and the Saracens carving up the world, while Chaos is represented by the lords of Faerie. A war between early Christendom and the last vestiges of traditional paganism, if you will. And for different reasons, both sides are after the man bearing the shield with three hearts and three lions. Holger recruits to his side a dwarf, a swan-maiden, and others as he travels across the fantastic realm he finds himself in, facing the assorted forces of Chaos in the process—dragons, werewolves, trolls, and other foul enemies beset upon him by the sorceress Morgan le Fey.

Decades later—in the ’70s—Roger Zelazny and Michael Moorcock would introduce their own wide-spanning fantasy series featuring battles between Law and Chaos, and the game Dungeons & Dragons would run off with the trope for its character alignment system. But Anderson handled the theme—well, if not first, with the same style and panache that the later fantasy works would use. The Law and Chaos divide is about order against entropy, about the rigorous order (dogma) instilled by Christendom (and Judaism and Islam, Holger assumes) against the looser morals and unfettered freedom of the wild pagans, backed by the Faerie lords and their fading magic.

Anderson was also using one of the staple tropes of speculative fiction—the modern man transported to another world—that earlier authors like Burroughs had used, that would also come return in Stephan Donaldson’s Thomas Covenant series, and Andre Norton for her Witch World. As such, now and then I could tell the novel was written by a science fiction author, such as when Holger’s immaculate eye for engineering could tell the metal components in his cold-iron sword. It’s fascinating to watch our man of science interact with the medieval fantasy world twisted by the fading power of Faerie. Holger instinctively knows how to use his sword, shield, and lance for their intended purposes, and so we get a number of quality action sequences.

The framing device for the story is one of Holger’s friends recounting the tale as Holger recounted it to him, and while it contrasts sharply with the feel of the body of the novel, I think it worked pretty well, especially ushering in the revelation at the novel’s end. (A revelation that was foreshadowed heavily, and a shade predictable given that it’s now become a stereotype, but which ends rather sharply without any closure.) Holger’s modern background also comes across in the novel’s attempts at humor—Holger using ’40s cliches and Shakespeare quotes and his companions being awestruck by “his” wit, for example. Sometimes it works, sometimes it doesn’t. In any case, it’s interesting to see the man in the “man transported to another world” trope actually reference his culture of origin; he doesn’t so much “go native” as blend memories and abilities shared between the two worlds. 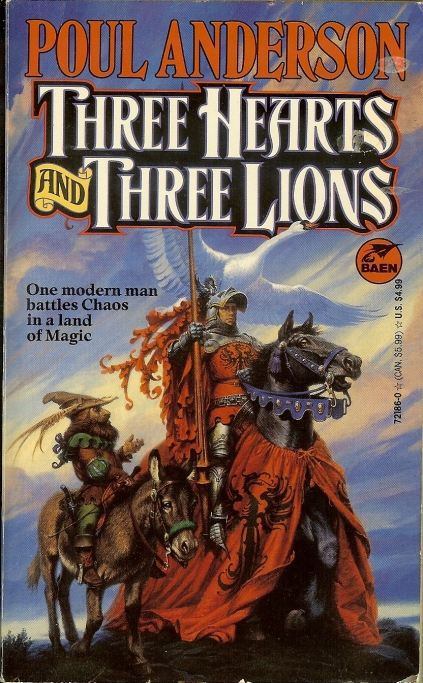 Anderson writes the clash of mêlée combat well, and throws in a number of fantasy tropes as Holger’s foes: a dragon defeated soundly by science; a werewolf investigation murder-mystery; a shortcut taken through a troll’s den. Anderson was born of Scandinavian parents who took him home to Denmark in his teens, before the rise of the Nazis drove them back to the US in the 1940s, which explains his knowledge and fascination with myth, and the Norse influence on his fantasy fiction (particularly The Broken Sword and Hrolf Kraki’s Saga, but also in this novel as well).

I have precious few complaints about Three Hearts and Three Lions; it’s a short but engrossing tale that weaves together modernity and myth in a thoughtful way. I can see some fantasy purists complaining that Anderson got his science in their fiction, as it were, but I didn’t mind. The book is worth the time for Anderson fans, of course, and recommended for anyone interested in pre-Lord of the Rings fantasies. It’s a novel that takes a long look at the genre while it goes on an enjoyable romp across mythological Europe for an epic showdown between good and evil, and despite the tiredness of that good-and-evil cliche it works. Three Hearts and Three Lions is a classic, and despite its brevity it has a lot of ground to cover before it ends.