Whit Masterson was in reality Wade Miller, one of my favorite noir authors, who (to make things really complicated) was the writing duo Robert Wade and William Miller. I’m not sure why the duo picked two pseudonyms to publish under; I did notice differences in tone and writing style between this one and their Wade Miller novels, and most of the Masterson novels are edgier in terms of content. (The Dark Fantastic follows the spread of a horrific plague; A Shadow in the Wind has two killers tracking down a witness; A Hammer in His Hand has a rapist called the Werewolf murdering women with… a hammer.) I’ve been impressed so far with them as Wade Miller, so I took the plunge and started on the Whit Masterson novels; Badge of Evil was the obvious first choice for me since it was the basis for Orson Welles’ classic film noir Touch of Evil.

Prologue Books – 2012 – a nifty design that evokes the original hardcover.

Mitch Holt didn’t really want to be assigned as the DA liaison to the police department. But the case was high-profile enough; well-to-do Rudy Linneker ends up dynamited in his own home, the chief suspects being his debutante daughter and her average-joe fiancée. Against all odds, Mitch cracks the case, but stumbles on a larger issue: while he was off doing the investigation work, what were the two veteran cops—Quinlan and McCoy, mastermind heroes who’ve cracked dozens of touch cases over the years—doing in the meantime? What about that strange bit of evidence that runs contrary to the killer’s testimony? And why do the detectives keep shaking down the killer under strange circumstances?

Without realizing it, Holt has stumbled on something that could cripple the Los Angeles authorities and tarnish their reputation forever: crooked cops who plant evidence on suspects, getting convictions based on gut feeling and hunch instead of honest investigation work. But when Holt tries to challenge the system, he finds himself chastised by his superiors, abandoned by the authorities, and stalked by assailants who Holt can only guess the identity of…

It’s interesting to follow someone who’s not a bitter, hardboiled detective for a change. Mitch Holt isn’t a violent man, and he never handles a gun for very long, preferring to stay within the law to dig out the truth. He’s something of a boy scout in his crusade for justice, faithful to the law to a T, but that leaves him vulnerable and out of his element; halfway through the book he has no safety net, being abandoned by his superiors, threatened by his assailants, and unable to trust that the police can aid him because of Quinlan and McCoy’s sterling reputations. Holt’s crusade to do The Right Thing never wavers, even when it should be turning into a quest to save himself, or to protect his family: he’s got stones, that’s for sure, despite his fears and vulnerabilities.

Holt is very much a family man, worried about the safety of his wife and young daughter over his own safety. And he’s married to a Mexican national, too; that was flipped in Welles’ film adaptation to give it more prominence, making the wife American and Charlton Heston’s protagonist a Mexican immigrant. His family is clearly Holt’s weak spot, and low and behold, late in the novel there’s a “reefer madness” plot to discredit Holt’s wife (and by proxy, Mitch himself).

The writing style is different from the Wade Miller novels, even more sparse and subdued than normal; still, the novel is exceedingly well written. Things alternate between slow, methodical mystery and tense thriller, but the balance is good. The plot and characters are multi-dimensional, even the antagonists and the bit-role characters who don’t take up much of the book. That’s what sold the novel to me: how well developed the characters are, each with their own realistic motivations. The two antagonist cops aren’t just cardboard cutouts or raving maniacs, making things more complex… though Holt stays a boy scout for the entire novel, at points being too naïve and clean-cut for me. 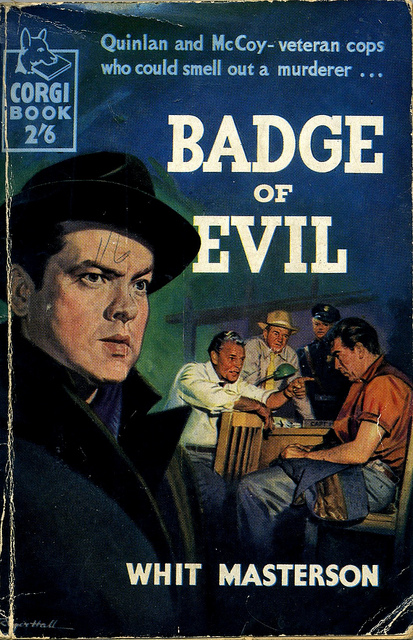 Badge of Evil is another winner, though I wasn’t as impressed with it as I thought I would be. Two reasons for that: it’s not as tight as Welles’ version, nor is it as fine-tuned as the Wade Miller novels I’ve read. I think the film version and my previous reading experiences set my expectations too high. It’s well crafted, exquisite pulp literature, don’t get me wrong. The characterization work is above average, and the plot is suitably complex. The ’50s setting is vibrant. And you can see the foundations of the “plucky lawyer against corrupt authorities” trope in this novel. So I still give it high marks, even though it didn’t hit those unrealistic high expectations I had. There’s still more Wade Miller/Whit Masterson novels I need to read, so who knows what the future holds.

Ebook Comments: Prologue Books offered this one as a Kindle freebie last year and I scooped it up; I guess that counts it as a comp’d copy if you want. The font was crisp and readable, and I didn’t see any crippling grammatical errors in there. The cover, like most of Prologue’s, is a bit simple but very effective, and is very similar to the original hardcover edition. The ebook’s priced at $3.99, discounted to around $3 by Amazon, putting it straight in the impulse buy category. Prologue also chose it as one of their first choices for their new print line, so you can get a dead tree copy for around $12 if you’d prefer.