I’ve been in a very pulp-adventure mood lately, something that started back when I read The Torch that I haven’t quite satiated. Rousing old tales of high adventure, clashing swords, that kind of thing. There’s plenty of old pulp tales that I’ve meant to read, one of which being this one—In The Grip of the Minotaur, a rare 1916 serial from the pulp Adventure reprinted this last year by Black Dog Books. As a history and classics buff, anything that puts vikings in the Mediterranean for a possible showdown with the minotaur has my attention. Black Dog is one of several small-presses that focuses on old pulp stories that has the sense to price their ebooks reasonably, and since I now own a tablet I went ahead and bought it as a New Years’ bonus to myself. 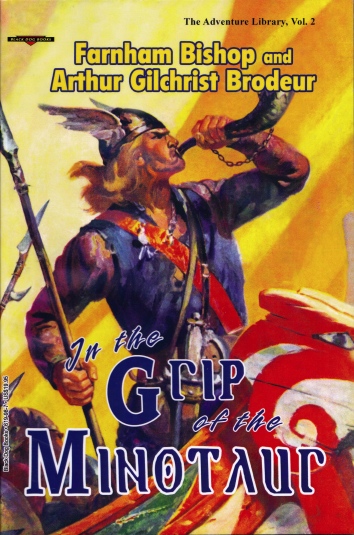 If you can’t tell, Crete and its mythical Minotaur dominates this book, and for good reason. The Minoan civilization dominated the ancient Mediterranean for hundreds of years, up until around 1500 BCE, when it mysteriously collapsed. Before British explorer Sir Arthur Evans re-discovered it in the early 1900s, the empire was forgotten—save, these authors speculate, in the legends of lost Atlantis, a plausible layman’s theory for the destroyed island-continent. Ok, the novel isn’t historically accurate in the slightest, despite its authors’ backgrounds as amateur historians; a lot of liberties are taken, and both facts and myth are played fast-and-loose in the story. Adventure takes precedent over accuracy.

Ragnarr, a Bronze-age Norse merchant prince, arrives in the city of Troy seeking nothing but peaceful trade. The Trojan king, Dardanus, sees the Northmen as his ticket out from under the heel of the oppressive Cretans and their fierce king Minos, who hold the Mediterranean trade hostage, preventing Troy and other city-states from access to the best goods. When Ragnarr falls for the king’s daughter Ilia (and she for Ragnarr), the Northman agrees to the king’s terms in exchange for Ilia’s hand in marriage, but the arrival of jealous Cretan prince Ambrogeos throws all their plans into disarray, and Ambrogeos ends up with the girl. For Ragnarr, this will not do; he pledges to sail to Crete and destroy the famed minotaur and crush the mighty empire that provides it with human sacrifices.

I think you can figure out the rest from there: love triangles, sea-fights and shipwrecks, epic sword and spear combat. There’s a whole lot of action and derring-do in here, as well as plenty of plot twists and cliffhangers, as befits a pulp serial. Some times it felt like the plot was too sporadic: it would look like it was going in one cool direction, but instead went in another, the plot threads thrusting and feinting like that throughout the book, making it a great attention-keeper. It doesn’t hurt that Ragnarr is a prototypical Prince Valiant: strong, bold, kind to women and animals, flaming death to those who wish him ill, beloved by his men, and every single woman in his path falls head over heels in love with him.

The prose is a bit dated, but it’s pleasant and readable. (For example: “I yield to no pirate,” he answered grimly. “Nor do I boast, but as to dying by the sword, we will sacrifice a Cretan calf to Tyr before we board the ship of death.”) Some times it feels mythic, other times it reads like a sword and sorcery story, other points it’s like a rip-roaring version of an ancient military history. Bishop and Brodeur know their history, and incorporate many interesting elements ripped from archaeological discoveries the story, such as bull-jumping and topless snake-handling priestesses. Again, unrealistic and fanciful, but damn entertaining when used in a fictional narrative. Plus, it’s pretty cool to see proto-Vikings roughing up the Mediterranean… kind of like a reverse The 13th Warrior.

Though, I can’t be the only one who sees the irony in an island-based empire, whose military might and island defense rests on a legendary navy, which gets crushed by Northern Germanic blond-haired raiders, given that it was first published during the height of World War I. The novel is a perfect work of fantastic escapism, and I can see it taking peoples’ thoughts back to a bygone age of chivalry—bygone in that it never existed—to get their minds off of the industrial slaughter. (Similarly, I find it odd that the 1915-1916 issues of a pulp named Adventure! predominantly featured covers of well-clothed women with cheery color schemes… keeping thoughts away from the grim reality of the war I guess.)

I’ve long been a fan of swashbuckling adventures like H.Rider Haggard, Edgar Rice Burroughs, and A. Merritt; In The Grip of the Minotaur is a rediscovered pulp classic in the same vein. Kudos to Black Dog Books to tracking it down and republishing it. In The Grip of the Minotaur is a page turner that kept my rapt attention, an entertaining thrill ride of non-stop action and plot twists and enjoyment. It lacks in character development and deep, complex ideas, but c’mon, it’s a book about Norsemen who take on the Minoan empire. That’s pretty damn cool. I went into this novel wanting to read some pulpy high adventure full of action and intrigue, and it more than fulfilled. It was worth every penny, I savored every moment, and now I’m hoping these guys wrote more than just this one serial. If they did, I’ll buy it.

Ebook Comments: Black Dog Books did a fantastic job with proofreading; I didn’t see a single error in here. I’m a bit less impressed with their font selections—unlike most other Kindle books, the font is on the large size, and even the smallest size still falls into the Large Print category. That could be helpful when reading on a small phone screen; on a tablet it’s a bit much. The price is reasonable, only $5.99; pretty good for a small press, and much more affordable than the $19.95 paperback (which, I grant, is on par with most other pulp reprint pricing).