Truth be told, I’ve never read a western before. (Unless, for some reason, you count Cormac McCarthy, who writes bleak condemnations deconstructing the mythology of western romanticism.) Though, I’ve always kind of wanted to: the mythology of the wild west is ingrained upon Americans at a young age in film and pictures. So, after acquiring a surprising number of westerns from mixed lots on eBay, having read some good things about Richard Jessup, and with nothing else pressing to read, I pulled this one out of my assorted old paperbacks box to rectify reading a western. (Yes, that means I read this before DeRosso’s .44, then switched up the review order; so sue me.) 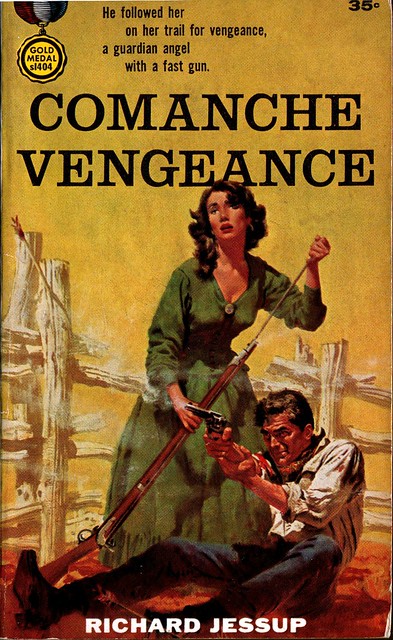 Gold Medal s1404 – 1957 – artist unknown. Don’t let the cover fool you; Sarah Phelps is more hardboiled, hardheaded, and deadly than any man found on these pages.

Life in the Old West requires you to take some hardships for granted. The isolation, the distance, the lack of amenities, the long, hard hours setting up a farmstead and herding cattle. Sarah Phelps was prepared for those, even though she pined for her long-gone plantation in Georgia, burned by Sherman’s march to the sea. She was even prepared for the death of her husband, Adam. She wasn’t prepared for the brutal murder and rape of her children at the hands of wild Comanche.

When her husband’s horse returns, riderless, two days later, Sarah stops mourning and begins her plan for revenge: dressing in her husband’s clothes, arming herself with pistols and carbine, she rides out after the Comanche chief who perpetrated the act. Seeing her and her plight, Gibson Duke, freerange gunslinger with a sordid yet honorable history, decides he can’t let her ride off to face untold numbers of Comanche warriors alone, and becomes her unwilling ally and occasional morale compass in her quest for vengeance.

What I found most interesting about the novel is the protagonist. Sarah is more of a hardboiled, vengeful badass than Duke. Don’t be misled by the cover: she’s the angel of death with a fast gun, and she’s out for blood. In an early chapter, she’s delayed by a few townsfolk who don’t notice she’s a woman; she breaks a man’s wrist (with a well-placed gunshot) so he’d drop his gun, and spends most of her time in town with a barrel stuck in some heckler’s belly. Later on, she begins to mellow, questioning the “meaningless, nameless violence”… right before slaughtering a bajillion buffalo for their hides. And again, before she makes her final plan to scalp the offending Comanche chief. Sigh. Still, I find it fascinating to see such a strong, independent female character, since ’50s fiction is often misogynistic.

The reflections of Sarah’s maybe-changing opinion are neat, but don’t go anywhere; she remains violent and vindictive after mellowing near the middle. On the other hand—and you knew this was coming—her relationship with Gibson Duke continues to grow until the final page. Duke’s role is to try and get Sarah to do the sensible thing—give up her quest for vengeance—and since that never seems to work, he goes along to give her moral support… and some more guns. I didn’t get a great feel of real character change or depth, since Sarah never moves beyond vengeance mode, but I did get a sense of development. And that’s acceptable enough in a ’50s trashy western paperback.

Ethnocentric racism kind of goes with the Western genre; Native Americans are either noble savages or wild, bloodthirsty killers. Here, most of the ones we see fit into the second category, the murderous, treacherous Comanche who were treated kindly by the Phelps family and gave bloody ruin in return. We see that the main Comanche chief is being overtaken by American mercantilism, swayed by trade and gifts (and probably the U.S. Cavalry) to stop plundering, so they’re not all horrible, horrible people who are shot dead by the thousands. Just most of them. Sarah points out that no matter how you slice it, they were here first, and even feels compassion for them and their dying ways now and again… like the one time she snuck into one of their camps and tortured some old squaw, threatening her son’s life. Sigh.

Jessup’s prose is average; competent, but not very flashy or unique. Flat-ish characters, somewhat predictable plot, though his setting descriptions are good—one of the strengths of the west is its vistas and scenery. His claim to fame was The Cincinnati Kid, filmed with Steve McQueen and Edward G. Robinson; after writing that, Jessup’s agent/editors distanced him from his earlier career of pulpy, noir-like paperbacks. He wrote some trashy spy-thriller novels in the early ’80s, and a lot of westerns in the ’50s-60s for Gold Medal; there’s not much else on Jessup out there. 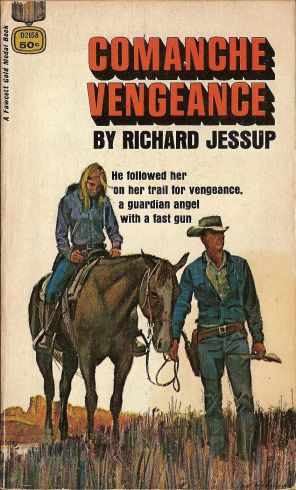 Gold Medal d2158 – 1969 – artist unknown. A less impressive cover, but at least Sarah’s dressed up for work and not as a housewife.

Apart from a few interesting details, and a strong female protagonist, this is a by-the-numbers novel. Good, but not well-written enough to make it a standout. While it wasn’t misogynistic, it was violent and dark—that should be obvious when it begins with child-rape and murder, even as off-screen atrocities—and I never got a sense the characters moved beyond that grim, dark world. I found it enjoyable, but a novel resting around average. The novel’s strong, female protagonist was a great selling point that makes Comanche Vengeance more of a standout, and it doesn’t go for much on the second-hand market if you’re curious. But it’s pretty dated, has occasionally unsettling content, and was weak in a number of places.