Don’t ever let me hear you say again that you want to kill. I know what it’s like. It isn’t the killings that you detest that are bad. It’s the ones that you enjoy.

I’ve heard the name Henry A. DeRosso quite a bit on different sites I read—odd, because he wrote mostly westerns, and shows up on a lot of hardboiled/noir blogs. But DeRosso has a reputation for infusing dark, noir elements into his pulp westerns. I’m not averse to westerns, but I’ve never had a burning need to go out and read one—it’s a taste I prefer in film form over the written word. While I love spaghetti westerns, and grew up watching people like John Wayne and Henry Fonda pull sixguns and ride horses, it’s taken me until now to sit down and read a western. (A real old-tyme western, not a postmodern one like what Cormac McCarthy writes. I guess I’ve read westerns if you count those.) The DeRosso novel I’ve most seen talked about has been .44, which I picked up cheap to see what the fuss is about.

Dan Harland was good with a gun—not just good, but one of the best. And he hated himself for that fact, hated living the life of a hired gun. But Dan didn’t have a reason to turn away from that life until he took the job to kill Jim Lancaster, because when he finally caught up with his quarry, Lancaster beat him to the draw… but didn’t fire, letting Harland kill him. That even triggers Dan’s long-brooding existential crisis, and he heads out to Lancaster’s home town to discover who put the hit on the man. He’s stonewalled by some ornery businessmen and a few snide cowpokes, pursued by Lancaster’s widow (who wants to know whether her husband is dead or alive), and can’t seem to escape his reputation as fast with a gun.

Finding out why Jim Lancaster had to die will be a trickier task than Harland realized. Because if some ambitious young gun doesn’t do him in, and if he survives the unknown assailants who had it out for Lancaster, Harland’s own dark nihilism just might be at the tipping point.

Night was starting to close in and in the thickening gloom her faced look wan and even distraught. But perhaps that was due to the twilight, Harland thought, and his own dark mood.

I see why this is mentioned so often in ’50s noir circles. Harland is a haunted individual; he didn’t want to kill people, and doesn’t want to live the short, brutal gunfighter’s life, and now that he’s finally trying to escape it those talents keep being put to good use. Westerns have always toyed with the anti-hero and dark noir elements, but here, they’re out in full force: Harland is a bleak soul caught in a web of misery, violence, betrayal and lies. Getting to the bottom of his quest is a further strain on his conscience, and he’s surrounded on all sides by well-armed criminal kingpins set on sending him to an early grave if he digs too much. There’s a pair of hardboiled femme fatales to boot, mirrored reflections of each other: Lancaster’s desperate widow, and the sister to one of the many men who claims to have hired Harland to kill Jim Lancaster.

As Dan continues on his quest, I noticed he almost started to like killing—which only worsened his state, crippling his already tortured soul. From that angle, Dan Harland is the epitome of the self-destructive noir protagonist: someone who keeps on trucking despite their better judgement. Like in many crime novels, few of the characters here are fore-destined for happy endings—a Shakespearean tragedy in its brutal, no-holds-barred approach to handling characters. Dan is at the mercy of greater fates, and everyone else is at the mercy of Dan, being the driving force of the narrative and the best gunslinger in town. The first paragraph foreshadows the novel’s menacing grimness:

The two riders working up the mountain towards the pass travelled about a mile apart. There was not hurry in their progress. The first rider made no effort to quicken his horse’s pace and thus draw farther ahead. The second rider, too, seemed content with the rate he was travelling. He kept his distance, not trying at all to overtake the other, even though he had been hired to kill this first rider and intended to do so before nightfall. 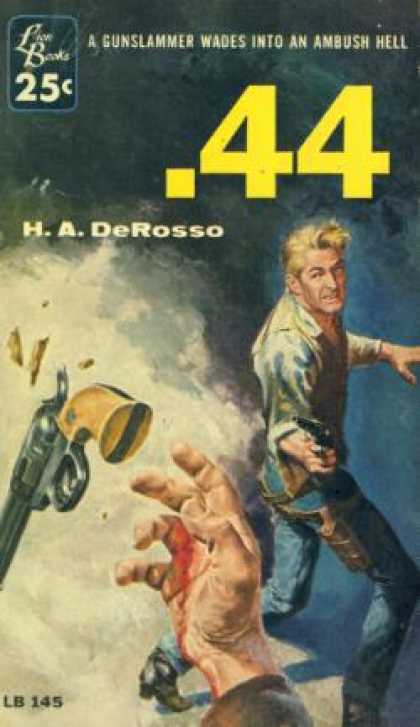 DeRosso’s writing style is a throwback to his pulp heritage; much of his material can be found in 1940s-1950s pulp magazines. There’s a lot of eccentricities—the awkward use of names at the end of a snippet of dialogue, as if to remind the reader who’s talking to who—and sentences are often awkward or clunky. But DeRosso can spin out some brilliant images of western grandeur, such as the many quotes I dropped on this review. (Though, note none of them are terribly long.) And he’s a man who knows how to wrap a novel’s plot into a tight narrative with plenty of mystery. His style is terse and a bit bland, and some of those moments attempting to evoke emotion lie like a flattened rattlesnake on the side of the highway. But those occasional flashes of poetic brilliance, and the well-maneuvered plot, makes the book work.

The land stretched empty and desolate and full of an inarticulate loneliness.

So what we have here is a fascinating book, if not the best written one. DeRosso’s examination of the human condition is impressive; it’s a bleak investigation on morality, examining the grey areas where violence is either warranted or . The stark and merciless events hammer that home. Dan Harland is a character who doesn’t fit into the western genre mold, someone appalled by their own violence who wants to escape the glamorized life of a gunfighter. There’s more unique pathos in Dan than in quite a lot of characters, even if it doesn’t come out as well as you’d hope. I wouldn’t say it’s a classic, a must-read, or something every noir fan should read. There are more accurate westerns, and stylistic ones… but I’m not sure many have the same allegorical depth and promise as .44, which is a well executed. A lean and bleak novel that might be worth looking into.