I’m not going to lie, I’m a comparative newcomer to crime fiction and mysteries. A driving reason I read Hard Case Crime is because I want to familiarize myself with quality authors other than Hammett, Chandler, and Goodis, and so far that’s been a rousing success—there’s no such thing as a “bad” Hard Case, so it’s been a good learning experience. Anyways. Charles Williams was a crime writer from the Gold Medal stable, but not just another Gold Medal writer. He’s been called an under-appreciated genius by people like Ed Gorman and Bill Crider on Mystery File, and there’s a large consensus rating Williams’ HCC entry, A Touch of Death, as the best in the line. I’m interested, but somewhat skeptical; a half-dozen reviews called Richard S. Prather’s The Peddler a masterwork of American crime lit, and I was left underwhelmed after that high praise. 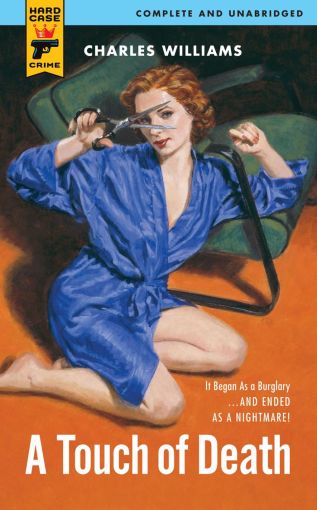 HCC 017 – 2006 – Chuck Pyle with a rather subdued cover, depicting the inside-cover snippet.

Lee Scarborough used to be a college football star, but after breaking his leg, he’s scraping by, forgotten, in abject poverty. When he answers a classified ad and heads out to an apartment complex to pawn off his car, he bumps into a beautiful sunbathing brunette. One with an offer. She has a lead on $120,000 stolen by a bank worker, hidden somewhere in his mansion-like estate. She also knows he’s dead. And to collect this pilfered cash, she wants Lee to sneak into the guy’s house and root around for it. After some debate, Lee agrees to undertake this assignment… which Diana assures him will be a cakewalk.

Lee finds two surprises in the house. First is the dead man’s wife, the beautiful Madelon Butler, plastered out of her mind on cheap wine. Second is the mysterious gunman roving the darkened building, who’s looking to gun Madelon down. Why? How? Lee doesn’t know. And it puts him in a bind: if he leaves Madelon alone, she’ll be killed, and he could take the fall for the murder, but if he takes her with him, he’ll need a place to hide out at and a way to soften her abduction. When that’s the recap at chapter four, you know you’ve got a fast-paced, take-no-prisoners novel in your hands.

Without realizing it, accepting Diana’s heist offer set Lee’s life in a strange new direction; living a diet of lies, with death at every turn… 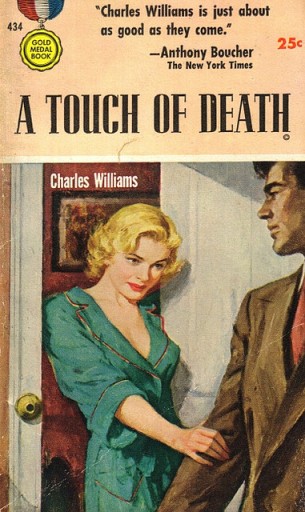 Gold Medal 434 – 1954 – Saul Tepper. Another subdued cover, though I love the literal allusion to the title.

Lee is something of the down-on-his-luck everyman, toughened up by his recent failings on the road from star to slum. Madelon, on the other hand, is the toughest, most hardboiled character in the history of crime fiction. Few things can shake her resolve or startle her, she’s hot-headed and independent, and every thing she tells Lee is either a lie or an evasion of his questions. Lee might have the gun, and the plan, but Madelon’s the one who’s in control—an unflappable woman, cold as ice and sharp as a razor’s edge. Her manipulative strength means Lee can never be sure of her honesty, or her motivations, leaving him in a dangerous situation.

With what seems like effortless ease Williams packs every chapter with the suspenseful tension most writers wish they were capable of. The prose isn’t too flashy, and the dialogue is the standard “hardboiled tough-guy gets oblique and vague answers” staple. But the emotion it evokes hooks into you and refuses to release; I’d picked up the book figuring to read a few chapters before bed, but this was one of those “just one more chapter” books, and I had to force myself to relent so I could get some sleep. I have a hard time categorizing this novel because while it’s a fantastic crime novel, it’s also the best suspense/thriller I’ve read all year.

That tension is the driving force which propels you onward, further and further into a narrative with an ending always shrouded in doubt. And this is one of those rare books that utilizes tension to its full potential, molding a plot around it, a roller-coaster of ups and downs barreling along like a freight train. Lee is a likeable protagonist, butting heads with the smart and cunning Madelon—he’s bit off more than he could chew. Lies, murder, burglary… it’s all too much for an otherwise honest guy. A Touch of Death showcases Lee’s descent into paranoia, the erosion of his sanity and morality, and his character development follows this track with machine-like precision without sacrificing your sympathy. 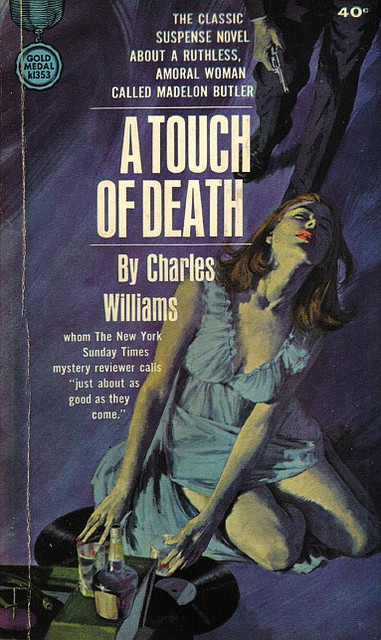 By this point I’d thought I had my top-ten list of Hard Case Crimes finalized, when A Touch of Death comes along and throws me for a loop. It’s now resting at the top of the heap. Everything good that has ever been said of Charles Williams is true, and this under-appreciated master is now dominating my to-buy list. The suspense he creates is potent, a labyrinthine web of lies and action and deceit looming over our everyman protagonist. The finale is a sucker-punch to the gut, followed by the last chapter’s rabbit-punch to the head: shocking, visceral, and powerful. Trust me, this book really is that good. Get up, run out, buy it, read it, tell your friends, tell your neighbors. Do it. Do it now.

2 thoughts on “A Touch of Death – Charles Williams”