Working my way through Hugo winners and other important works, I stumbled onto this one, connected to Williamson’s Legion of Time by a similar time-war theme. Originally serialized in 1958 in the March and April issues of Galaxy Science Fiction, you can now read it for free online or on your e-reader of choice via Project Gutenberg. The Library of America considered it good enough to include in a two-volume set of 1950s American science fiction, coming in September 2012. Does it deserve that place of honor?

This war is the Change War, a war of time travelers — in fact, our private name for being in this war is being on the Big Time. Our Soldiers fight by going back to change the past, or even ahead to change the future, in ways to help our side win the final victory a billion or more years from now. A long killing business, believe me.

You don’t know about the Change War, but it’s influencing your lives all the time and maybe you’ve had hints of it without realizing.

Have you ever worried about your memory, because it doesn’t seem to be bringing you exactly the same picture of the past from one day to the next? Have you ever been afraid that your personality was changing because of forces beyond your knowledge or control? Have you ever felt sure that sudden death was about to jump you from nowhere? … If you have, you’ve had hints of the Change War.

Thus is the explanation provided for The Big Time, and the Change War, told to us via our first-person protagonist, Greta (yet another non-sexy name). She’s a party girl, working at a locale simply called The Place: a rest-and-relaxation center for soldiers fighting in the time-altering Change War. Troops are dumped here to get away from the stress and turmoil of the front lines, in the ongoing war between the mysterious Spider and Snake factions, each pulling the strings of Earth’s history. And it’s the job of Greta and her compatriots—an Elizabethan Englishman, a 23rd-Century Chicagoan, and a genteel Southerner, among several others—to perform the many duties required to support their Spider troops.

The novel follows an average day at The Place, showcasing the motley assortment of time warriors: a World War I British Tommy, a Nazi commandant of an alternate future, a Roman legionnaire, a couple of aliens, and a Cretan battle-maiden. And once the cast is assembled, their petty quarrels take a back seat to complications that could doom everyone within The Place. 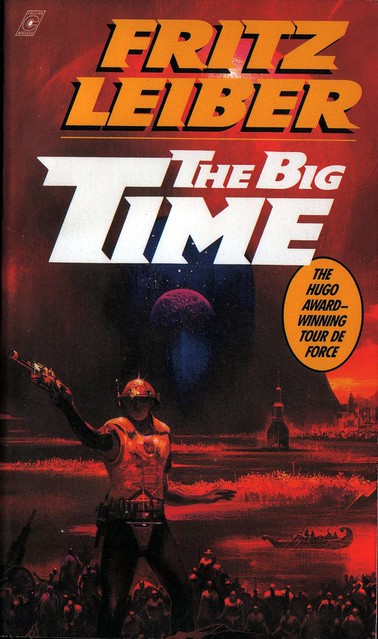 Despite what the cover tells you, the book is closer to a one-room stage play than an epic of battles and conflict amongst the time streams. The action never leaves The Place, though characters do arrive from time to time. As a matter of fact, it’s safe to say that the book doesn’t actually have any action. The narrative follows the human side of this struggle: battered and shell-shocked time soldiers, on the ropes from protracted fighting, and ungrounded from their time and place, stumbling into a cross between a saloon, a bawdy-house, a psychiatrist’s office, and a field hospital. With that confined location, somewhere out in the void of time, the action that takes place is psychological.

At least Leiber tackles some of the more complex issues head-on. One of the first scenes is a spat between the English doughboy and his superior, the German gauleiter from a Nazi-occupied North America. The Englishman is fed up of altering and re-altering a past to create a future he doesn’t agree with, and questions the motives and machinations of their mysterious Spider benefactors. The issues of these characters—their uneasy alliance, their lack of information, their displacement from the eras they knew—isn’t dealt with in-depth, but it does affect them. Hence The Place, playing its multiple roles to keep the troops’ morale up: a place to recuperate the frayed and disillusioned time warriors, a Place to patch them up physically and mentally before they’re thrust back into the conflict. (Which reads something of an allegory on the futile nature of the Cold War, now that I think about it.)

Leiber’s envisioned futures and alternate histories are complex, if undefined, and run the gamut of possibilities; you can see their influence on later, more famous alternate histories. There’s the character who ran steamboats up the Mississippi, in a world where the Confederate States were victorious, and Vicksburg University was the forefront of knowledge and learning. There’s the future where America was kept out of World War II, leading to Nazi Germany conquering North America, where the German was in charge of Toronto. See, the Snakes have formed an alliance of “the classical Eastern empires, Mohamedized Christians, and Marxist Communists” to try and dominate the world. In response, the Spiders have sided with the West… which means they’ve propped up first Crete, the Romans, and then the Nazis in an attempt to beat the Snakes. Small wonder the Englishman has a problem with the Spiders’ methods.

The stage play aesthetics make the novel unique in science fiction; Leiber was the child of two Shakespearean actors, and channeled his experiences with theater into the novel. With all the action (“action”) taking place in a bubble, a void between time and space, you can imagine the set laid out for a stage production. The characters will often break into long monologues, or back-and-forth arguments in the form of speeches. The dialogue has a poetic flourish to it, though one influenced by the jazz and beatnik cultures of the 1950s; those ’50s inflections date the novel as anything but the far-future. Greta’s first-person perspective is rife with dated ’50s prose; the Cretan warrior woman straddles the line between traditional Ancient Greek incantation and freeform jazz, which was somewhat entertaining, if odd.

Ace G-627 – 1967 – illo by Hoot von Zitzewitz. Before there was photoshop, there was this style of surreal montage cover.

If you go into The Big Time looking for action and excitement, you’re likely to leave disappointed. It’s a book with a strange and unique recipe. Layer two parts Casablanca with three parts Shakespearean stage play, fill to brim with Jack Williamson’s The Legion of Time, and garnish with strange ’50s affectations—party girls, beatnik lingo—and you have The Big Time. (Serve warm.) It’s an interesting chamber opera that has a lot to say, though it’s not clear about saying it, and like other works from its era I’m not sure what point the author was trying to make. The Big Time has the scope to ask the right questions, but not the scale to answer them—it’s really a tale of the people who are affected by the Change War, and that tale comes forth in the mannerisms and monologues of theater. Prose theater, if you will.

I thought it was an interesting enough story, and will be of interest to hardcore science fiction fans. But even as a Hugo winner, I’m not sure it will appeal to casual readers. It asks complex questions of loyalty, love, existentialism, the human condition, and factional warfare, and does so with vigor and sagacity. Its concepts are Earth-shattering, but the plot never leaves one confined space. Tread lightly, and come prepared for a work unrivaled within the science fiction field, for good and for ill.