Contrary to popular belief, my focus isn’t just the trashiest, pulpiest paperbacks I can get my hands on. No, sometimes I change it up and read something in the genre that makes a lot of best-of lists and award nominations. (Hence Door into Summer and Blood Music, among others.) Though, in most cases, I don’t see the point of going over something everyone and their cousin has read and reviewed; don’t expect to see Dune, The Lord of the Rings, or The Maltese Falcon here anytime soon.

In this case, it’s Clarke’s The City and The Stars, long regarded one of the greatest and most influential novels of the Golden Age. The only Clarke I’ve read prior was Childhood’s End, for a writing science fiction class; I thought the novel’s concept was superb, but that it was bogged down from too much authorial exposition, too much telling and not enough showing. (Views that were more or less unanimous with the rest of the class.)

Arthur C. Clarke is one of the most well-known science fiction authors, in no small part because of his influence on the genre. Together with Asimov and Heinlein, Clarke makes the Golden Age trifecta, the first three major authors of the genre. Clarke has a solid background in science, dating back to his days as a RAF radar instructor; he later pioneered the idea of using geostationary satellites for telecommunications. His writing career was just as expansive, and includes a number of highly-regarded works: The City and The Stars, Childhood’s End, 2001: A Space Odyssey, and Rendezvous with Rama. And while Clarke’s Three Laws are less well-remembered as Asimov’s Three Laws of Robotics, they’ve been influential nonetheless.

The City and The Stars is a fixup of Clarke’s earlier novella, Against the Fall of Night. It’s an extensive revision, but the core of Fall of Night became the first third (or so) of the new work. Clarke’s explanatory prologue noted that he didn’t find the earlier work as well written, and wanted to not only improve the quality of writing, but expand upon the idea he presented, stretching out the tale to include other ideas Clarke had come up with. 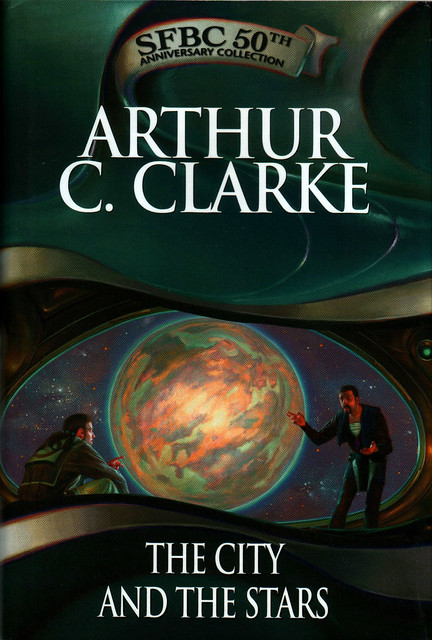 SFBC 50th Anniversary Edition – 2003 – Donato Giancola. The problem with the SFBC 50th books: most of the cover space is taken up by the design, the art left smushed in the center.

The novel takes place a billion years in the future, in the city of Diaspar buried underground, after humanity lost a major interstellar war and was driven from its empire back to its home planet. Humanity has fled to this, the last city on Earth, to create a utopia of sorts: using the advanced technology of the Central Computer and its memory banks, its population is encoded to allow the computer to recreate them at a later time, wherein the pop into existence fully grown. Thus, for all intents and purposes, the population is immortal; their old memories are locked away until they have time to mentally develop, whereupon they spend eternity making art and solving complex mathematical and philosophical equations.

Our protagonist is the young Alvin, the first human created in the city in centuries; he has no prior memories for the computer to implant in his body because he never existed before to create any. Instead, he has the driving curiosity to leave Diaspar and see what’s outside, something none of his compatriots have: instead, they have an irrational fear of the outside world, and flee from even a glimpse of the desert surface of Earth. Needless to say, Alvin pulls up his bootstraps and begins to look for a way out… which, coincidence has it, will change the fate and future of Diaspar.

Signet P3429 – 1957 – Richard Powers. One of several neat covers by Powers for Signet; the others had orange skies instead of purple.

After the first chunk of the novel, Clarke takes the plot off in new and unforeseen directions; it’s probably the dividing line between Fall of Night and City and the Stars. I don’t want to spoil anything, but it involves the pastoral city of Lys, an ancient alien polyp, a long-lost religious messiah, a mute robot, and the vastness of space. It’s a strange switch, considering how much was built up with Diaspar. It’s almost a bait-and-switch: it looks like the novel will be about the coming of age of Diaspar, a paradigm shift that changes the city’s rigid ways, a comparison of modernism and naturalism. But no; the book establishes that setup, sort-of deals with it, then Clarke has more interesting things he wants to get to. Thus Diaspar’s development is hand-waved away with “they’ll probably do this.” Which is a shame, because exploring the psychology of Diaspar had such potential.

It’s also annoying as Alvin stops being an active driving force, rebelling against the status quo and bringing enlightenment to Diaspar, and just sits around watching things happen. To be fair, Clarke throws in a number of interesting ideas in Alvin’s later travels, and gives a sense of world history that’s downright potent, but they’re undeveloped snapshots, scattered Polaroids of another novel’s plot. The larger focus looked to be Diaspar doing this and turned out to be Diaspar doing something similar, but unexpected; I’d figured Clarke would stick with the Diaspar-Lys dynamic he’d built up, but it’s like he wasn’t sure where he was going and jumped those tracks.

The end result is a powerful idea, but I’m not sure I can track the novel’s plot arc leading there. I’m unconvinced that Against the Fall of Night was the chassis built for the later ideas; but it was one they fit on, so here’s the finished product. The parts that were clearly the earlier work are good: a dynamic character, a developing plot, mystery, a contrast and comparison of two ideological ways. I really liked the first fifty or so pages of the novel (my copy is only ~210 pages). After that, it deteriorated plot-wise to wandering around watching vague and unrelated points congeal, before an unfulfilled but fascinating conclusion. Clarke’s vision is amazing, but his story arc is disjointed.

Signet 451 – 1970s – artist unknown. Not much info for a slick cover; I like the retro use of aqua, the building stretching into the starry void.

Despite being one of the “big three” original Hard SF authors, Clarke is the least “hard” in terms of plausible science. (Small wonder to find that John W. Campbell rejected Against the Fall of Night.) At the core, his novels deal more with humanity and individuals, rather than focusing on scientific theories or devices. Here, the running theme of Alvin’s desire to escape Diaspar and see the stars compared to his compatriots’ irrational fear of leaving the safety of the city is a good example: I can read it as an allegory for 20th Century space exploration (amongst other things). While Clarke was amazing at making scientific predictions—this novel mentions a pattern of graphing prime numbers seven years before Stanislaw Ulam discovered it—his novel is closer to a very early work in the field of social science fiction or Soft SF. That said, his background in engineering leads to a technical writing style and focus; he’s still a Hard SF author at heart.

Like most Golden Age authors, Clarke’s style is very simplistic, and he puts the telling in the old adage “show don’t tell” to shame: layers and layers of authorial exposition and passive recap in favor of dialogue or action. His characters are wafer-thin at best; the flat characters and overabundance of telling were the same problems I had with the other Clarke stories I’ve read. It gives Clarke’s work a definite “juvenile” feel, even though the ideas are expansive and mature. It makes it hard to became engaged with the book emotionally; reading started to feel like work after a while. One of the problems of Golden Age writing is that the author would be more interested in describing a setting, history, or set of concepts than working on well-rounded plot or character, which is a flaw that fits Clarke to a tee. 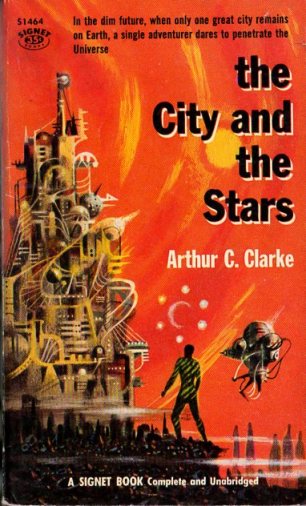 Signet – 1957 – and the other Richard Powers cover. What, I really like these.

This is still a highly regarded book, something of a sacred cow to old-school science fiction fans. But I can’t hack up a recommendation. Clarke comes up with wonderful ideas, and the first half’s vision of humanity in the far future is as amazing as it was influential. But the finished work feels disjointed, dry, and slow. It lacks any emotional resonance because Clarke focuses more on the ideas than characters, on telling the story rather than crafting a plot; it’s not a strong literary experience, the characters too flat to empathize with, and while its concepts are fascinating, its plot is unbalanced.

I can see how this novel influenced later works in the genre, making it an important work in the history of SF. Which I guess is a reason to read it, for the historical significance; it’s still an intriguing vision with some interesting conclusions. But one written by an enthusiastic engineer, and it shows in Clarke’s creativity and sweeping vision as much as his awkward pacing and lifeless prose. I can see why ’50s readers preferred Fall of Night for years over City and the Stars—so state multiple sources—years after the “definitive” City and the Stars supplanted the earlier work.

Clarke’s view of mankind’s future is unique, a staggering reflection on where humanity has been and where it’s going. But this, like too many other SF classics, is held in high regard because of what it puts forth, overlooking its shoddy execution. Clarke is not the author for me.

6 thoughts on “The City and The Stars – Arthur C. Clarke”