We’ve been through this before. Wade Miller was Robert Wade and William Miller, writing duo who penned a large chunk of the ’50s Gold Medal mystery lineup, all of them of legendary quality amongst vintage crime readers. It’s a pen-name that deserves more attention in the reprint market than it’s been getting, though I have found that Prologue Books has picked up some Miller novels to add to its growing assortment of Gold Medal reprints. I enjoyed the two Wade Miller novels I’ve read so far, so if this one’s as good as the others, it’ll finalize my assumption that everything they ever wrote was solid gold. 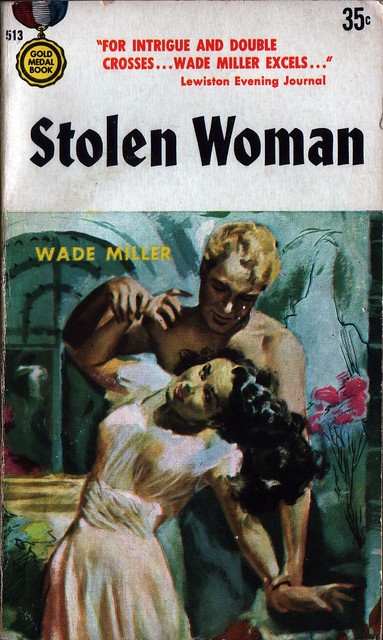 Gold Medal – 1955 – Baryé Phillips. It may look like a romance cover, but don’t let that fool you: this is some fine vintage crime.

Just south of the border, in the seedy city of Mexicali, there’s a small dive bar called La Mujer Robada—“The Stolen Woman.” Burke, a drifter, is the current piano player of the establishment, though he’s also playing his boss—Burke’s having an affair with the boss’s hot wife (with the non-hot name Gretchen). That comes crashing down when the guy stumbles upon them in bed, and in a panicked confusion, Burke shoots him in what he thinks is self-defense. It’s not; what Burke thought was a knife was really just a pair of gloves.

Burke’s life gets worse when Jesus David, a Mexican police officer, walks into the scene… and then things go further and further wrong: David coerces Burke into filling the dead boss’s role in running dope across the border, then Burke is captured by a narcotics agent, and strong-armed into finding out more about this dope ring. Burke is also approached by Socorra, a cute Mexican nurse who saw him playing piano the other night and wants to get to know him better. Now he’s struggling to fix the life he’s in, while keeping Socorra and the life he wants safe.

So, in just the first sixty pages, Burke gets dropped into a tangled web of limitless intrigue. The novel see-saws back and forth, a stream of betrayals, double-crosses, and secret agendas. Burke doesn’t want to play patsy for these various groups, but his agenda and goals are manipulated by other characters—a host of string-pulling manipulators. Burke—and the reader—is never too sure about the reality of the situation, since there’s a strong chance that Burke’s being misled. And when he tries to separate truth from lies, he ends up making more than a few wrong assumptions.

If you can’t tell from the brief first-half synopsis, Stolen Woman starts along the lines of those “crime novels as morality plays/moral fables.” By doing something outside of approved social norms—in this case, adultery, with the boss’s wife no less—leads a man to ruin. The slippery slope nature of its set-up follows that school of crime fiction. But about at the halfway point, Burke decides he’s had enough, and starts to manipulate this game himself. It doesn’t always work—Burke himself has some terrible things happen to him, both physically and emotionally—so the book skims that road-to-downfall trope and leaves it behind. Like in the other Miller novels, the protagonist undergoes some real—well, more defined than average—character development, leaving them… well, not better, but different and more interesting at the end.

Also, keep an eye on how the author(s) use Burke’s hands as metaphors. As a piano player, they’re the most important part of how he uses his body in his craft, so it’s a natural thing to focus on. In some cases, the symbolism/notations are blunt and obvious, but there are several subdued references scattered through the narrative as a running theme.

With three of his novels under my belt, I’m noticing three thematic techniques that crop up often in Wade Miller novels:

This is one of the earlier Wade Miller novels, and that shows; the writing is a little dry, and some of the literary techniques, the plotting and pacing, and so forth that made their later books great isn’t as developed here. It still feels like a Wade Miller novel, and it’s still really good, just not as crafted as Branded Woman or The Killer. That roughness is a good thing, since it fits the novel’s texture. And the prose is far from bad. There’s some fantastic lines in this one, such as Burke demanding the truth because he’ll “starve to death on lies,” or that a “name tasted evil.” At one point, one of the characters comes so close to embodying the swarthy Latino stereotype that Miller quips, “all he failed to do was twirl his mustache.”

Stolen Woman may be the best of the three Wade Miller novels I’ve read (though I still lean towards Branded Woman as my favorite). Its complex plot unravels itself to reveal more layers of intrigue, while its characters develop over the course of many betrayals, double-crosses, and surprise developments. This is a masterful book, brisk and vivid and worthy of rediscovery, a compelling read that satisfies. It’s brief, and lacks the polished spark that other Miller novels have, but its plot and characters are more interesting and more developed. Stolen Woman is a great read. I give it high marks all around.