Maybe it’s sheer stubbornness, maybe it’s my non-conformist nature, but instead of reading one of John Brunner’s great novels (I own most of them) or the ones that are recommended to me (Meeting At Infinity, Traveller in Black), I keep reading his trash novels instead. I tell myself that reading his trashier, pulpy, earlier Ace attempts will make his better novels stand out. I was more than a little curious about this one, given its cool cover and back blurb hyping it as a suspenseful horror novel (!?). Though learning that this was one Brunner was most embarrassed about made me a little leery, it is VERY short, with ample margins to boot, so I figured at worst I’d lose a few hours. 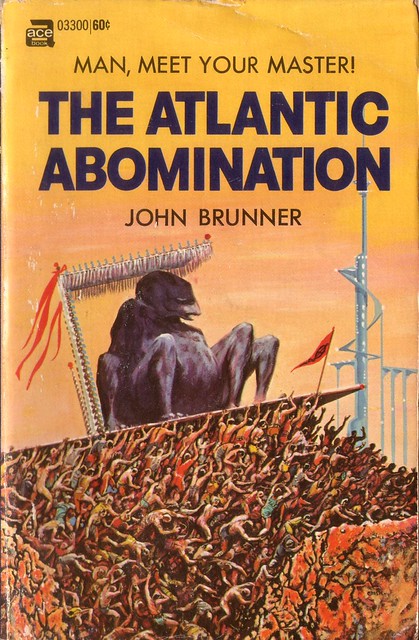 Ace Books 03300 – 1970s – Ed Emsh. From page seven, where the monster commands its followers to fill a ravine so it may cross… one of the few great scenes in the book.

We start with scientists doing deep-sea research in a Northern Atlantic basin. Mary Davis tells Peter Trant that she got into oceanography because of a schoolgirl crush on the third crew member of their experimental bathynef, Luke Willis. Moments later, Luke is buried under a pile of mud and killed, though this avalanche unearthed a long-lost buried city… and the preserved corpse of an alien monster. Returning to the surface, their boss is overjoyed, assuming he’s found the lost city of Atlantis. (He’s kind of a nut about fringe science.) A second dive finds more secrets, including Luke, alive once more! Yet it’s not the same Luke; he goes mental upon seeing the corpse, and when the expedition prepares to return to base, he takes the bathynef and dives back down to the bottom.

So, another monster comes out of hibernation, and is using its mental powers to first dominate Luke, then a Navy submarine, then a passenger liner. Meanwhile, Peter and Mary have married—wow, that was abrupt—but are called back when strange nautical-related incidents happen in the Atlantic. The monster has been moving towards the Florida coastline; the last of a long line of alien overlords, he sets out to reclaim his rule, and takes control over an increasing number of people—including Peter! And the military is struggling to find a way to kill the creature without harming its many human slaves.

The closest thing I can compare The Atlantic Abomination to are B-movies: take, for example, its constrained settings, its exposition-heavy dialogue, its giant monster running rampant in a major metropolitan area. I just saw Beast from 20,000 Fathoms on Turner Classic Movies, and Brunner’s novel fits the same kind of “giant monster unearthed” tropes… it’s like he wrote it hoping it’d be optioned as a film, trying to latch on to the fad of creature features. Atlantic Abomination would make a great Toho movie: it exists in a future laden with wonderful oceanography gadgets, such as the bathynefs, experimental British submarines, and the like. If those devices had an expanded role—attacking the monster with some futuristic vehicle, perhaps—it’d be a perfect fit. The biggest difference is that the monster’s got psychic powers and demands worship from mortals, which leads to some impressive moments that are almost worth the price of admission.

There are two things I found interesting enough to note. First, the book was ahead of the curve in the deep-sea exploration field; its array of nautical technologies is impressive, even though they’re not described. I like the idea of deep-sea diving science fiction, and this story makes good use of that concept in its first half. Second, for a novel written during the Cold War, the Soviets and Chinese are presented in a very kind light: they were the ones who developed at least parts of the bathynef and its processes, help out in the rescue efforts, and are not running around banging shoes on tables and threatening to blow something up. An idealized, optimistic future, where the Cold War ended peacefully and mankind all but gave up nuclear weapons.

I’ve noticed that in the novels I’ve read, Brunner will take some otherwise admirable prose and do something wrong with it: give it a bad structure, or poor word choice, maybe add some British inflection which doesn’t translate well. This one feels more like a hack-job than normal because of the sheer number of typos, which was disappointing. Every now and then Brunner will pen some fantastic prose, and then gum up the works with a disjointed sentence, or multiple end-on-end paragraphs of what’s supposed to be dialogue and is, in reality, contrived exposition.

The great sins of Atlantic Abomination are that it’s so damn predictable, and that it would have made a better Harryhausen movie than a novel. You could argue, successfully, that stock backdrops and flimsy characters were acceptable in Saturday afternoon creature features but not in the works of a future SF literary master. Atlantic Abomination is a light and campy novel that entertains for a few nights, but doesn’t go out of its way to take risks or push envelopes.

“A horror novel by John Brunner?” Not unless you consider 20 Million Miles to Earth and Godzilla horror. I grew up watching TNT’s Monstervision, so the novel was a kind of guilty pleasure, a throwback to the entertainment of my youth, but that’s the main reason to read it: a love of giant monsters.