Returning again to both Robert Silverberg and Tor Doubles. Silverberg’s Sailing to Byzantium is very much an idea-based story, though its idea is also reliant on its setting; and what an interesting idea it is. A Nebula-award winning novella, the tale takes its name from a poem by W.B. Yeats, and first appeared in Isaac Asimov’s Science Fiction Magazine in February of 1985. 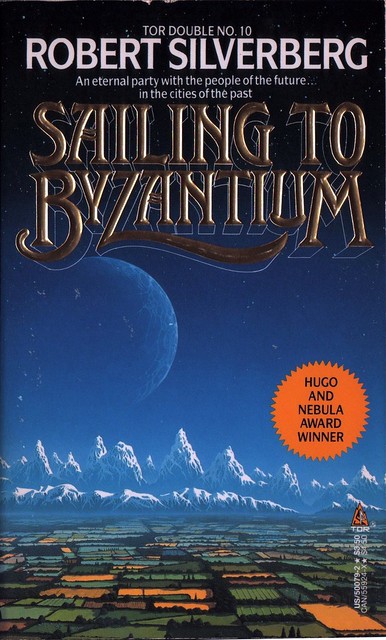 In the fiftieth century, a depopulated (but immortal) batch of future-humans use their advanced technology to reconstruct the great cities of Earth’s past. These cities, of which there are always just five, are somewhat accurate interpretations of historical places. Populated with artificial “temporaries” and built by robots, these cities are used somewhat like resorts for the placid and technologically wealthy citizens, who have nothing better to do than keep up with their social circles as they explore the streets of each new city. Then, when the citizens’ interest in a city begins to wane, it’s scrapped and replaced with a new marvel from the annals of history.

Our protagonist is Charles Philips, plucked from New York in 1984 and deposited in the far future. He tags along with a female citizen named Gioia, a companion and guide, as she jumps from city to city. It’s something of a dreamy, yet confused nightmare for Charles: he’s lost, out-of-place, having trouble connecting with these far future denizens because of the cultural barriers. He can’t quite understand how the world operates yet on a micro scale (everyday culture of these humans), much less a macro one (the building/demolition/rebuilding of the cities); to top it off, the 1980s are so far removed from the current time that the future citizens have as little understanding of its relevance or place in time. (One citizen asks Charles if the ancient city of Alexandria, compete with its wondrous lighthouse, is much as he remembers it, not comprehending that it had fallen to dust mellenia before Charles was born.) While the citizens are always outgoing, Charles is struck by a bad case of culture shock mixed with a slight case of future shock.

This world-building is all well and good; Silverberg does an admirable job constructing scenery and setting. But the novella starts off plot-less; without a plot or motivation, it feels listless. Perhaps trying to evoke Charles’ feelings of isolation, confusion, and lack of purpose? Silverberg’s level of development is often minimalist, and while the setting—and ideas behind it—are superb, I never got the feeling anything was going on here. Just world-building. Beautiful world-building, an inspired setting, a sympathetic protagonist, but setup without a sense of purpose: we have the setting framing the story, but what story is going to happen in it?

The second half switches gears, and the novella launches into a character-based story revolving around Charles. It’s a jump-start love story based on an interesting revelation around the novella’s midpoint. And while I felt it was somewhat spontaneous, in the out-of-thin-air vein, it did have just enough preceding context for it to make sense. Better yet, it puts the book on track with a plot, and delves into some deep concepts about aging, life, love, and a Philip K. Dick-style questioning what it means to be human. A little foreshadowing would have been nice, but the conclusion—and its development—is worth the price of admission. That’s where this novella’s magic happens.

Overall, I have two problems with the book, both of which can be summed up as “it’s too short.” For a novella, the first half is loose and unfocused, too much so for short fiction; yet once the plot becomes clear, the story is almost through, and then it’s over. While it’s far from rushed, I would have enjoyed seeing a lot more before the conclusion—the rallying cry of most readers enthralled in a good story. The unfocused beginning reads like the beginning of a larger novel, putting everything into perspective, placing the pieces, crafting the stage for the finale… a finale which Silverberg wraps up in 99 pages. That said, the novella is both without excess and hasn’t left anything unspoken.

Now, the cover: this has nothing at all to do with the novel. Brian Waugh has painted a very evocative cover, but for a story taking place in one city at a time, you’d think that would make a better cover choice—Alexandria, or New Chicago, or the titular Byzantium. Instead: hedgerow-esque farm fields, a range of spontaneous and veiny mountains, and the largest moon I’ve seen in a while. As Silverberg describes the terrain between the cities as rather drab and uninhabited, I’m wondering which novel had its cover switched with Sailing to Byzantium, because it sure as hell doesn’t belong here.

Sailing to Byzantium is a good entry, a solid tale in a style I hadn’t seen before from Silverberg. Not the best of Silverberg’s that I’ve read with its pacing problems, but it is engaging, and poses some interesting questions. Dreamy setting begets interesting character development, and while the transition isn’t smooth, both halves combine to make an insightful short novel. It’s good—good enough to earn its Nebula award—but while it’s well-rounded and polished, it lacks the spark of greatness. I’d recommend it, but not as heartily or voraciously as other Silverberg entries (e.g. Downward and Hawksbill).