Gordon Dickson is one of those authors I’ve had several people recommend, and who shows up on the more-inclusive lists of important SF writers of the twentieth century. Dickson, a Canadian who emigrated to the U.S. as a teen, is best known for his military space operas, the most famous being the Dorsai/Childe Cycle novels. John Clute called him a “science fiction romanticist,” with his “images of heightened solitude, romantically vague, limitless landscapes, and an anguished submission to afflatus” which reflect the genre’s connections to Gothic fiction. That’s really all I know.

I thought I’d start with Hour of the Horde. The bio blurb sounded intriguing, sort of like Alien Legion. It’s a military SF novel, which is Dickson’s specialty subgenre. And I didn’t want to get sucked into the long Dorsai series, in part because I’ve heard it takes a few novels to get to the good ones. Though the cover is rather uninspiring, and almost turned me away. 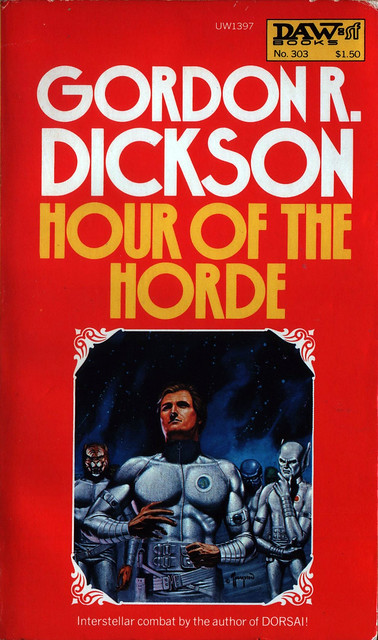 Miles Vander is a painter in search of perfection: he’s fascinated by the idea of hysterical strength, e.g. the adrenaline rush that allowed a woman to lift up a two-ton Chevy pinning her husband. He’s also intrigued by the idea that there’s a mental equivalent that could cause him to become a master painter. His vision is often raw and emotional, perhaps because his left arm was crippled by polio (a sufferer of asthma, Dickson often has a protagonist who must overcome physical disabilities). Miles’ fascination with these phenomena, and his painting, has left him uninterested in the affairs of puny humans, despite his girlfriend’s reprimands that he’s soulless and adrift from reality. So much so that when the sun starts changing color, he’s most worried about the effects it’d have on his paintings’ color values.

It turns out a race of advanced aliens (with the inane name of the “Center Aliens”) changed the sun’s color to attract Earth’s attention, and they arrive bearing ill news. A race of weasel-like aliens (…) known as the Silver Horde is rampaging through the universe, destroying all life and depleting all resources on every planet they encounter, and there’s a chance they’ll head towards Earth. The Center Aliens are collecting one member of each affected race to come join a defensive line and help fight back the Silver Horde. It’s about this time where I realized just how much of a rear end in a top hat Miles is, since he doesn’t care enough about Earth to go until he has an epiphany and joins up to save the “unborn canvases” of his future paintings. Yep, he is an immense tool so far; I think I see where this is going.

Miles arrives at the battle line only to find he’s relegated with the less-advanced “barbarian” races of the galaxy on a tiny ship nicknamed the Fighting Rowboat. Here, order has broken down; the ship’s crew has fallen into a strict caste system determined by hand to hand combat, where each being ignores everyone under their stature and is in turn ignored by those of higher capability. Worse, the crew all but knows that they’ll never fight the Silver Horde; morale is low due to how insignificant the Center Aliens consider their technical prowess. Miles hikes up his sleeves, and between a combination of guts, spirit, American ingenuity and hard work, sets off to make the ship orderly, fighting-fit, and ready to do its part against the Silver Horde.

This is a slow novel. It takes a good while for things to get moving, and even longer before it gets to the “interstellar combat”/”galactic warfare” the covers advertise. (The Horde doesn’t even show up in force until chapter 13.) There’s a lot of expository catch-up, where Dickson blazes past weeks of training and development in a few sentences. I spent a good chunk of the book thinking more about what I’d read after Hour of the Horde, but after eighty pages or so, things fall into line, and the novel starts building momentum. The final battle is riveting but feels short; after all that buildup, it could have been stretched out and given more details.

Dickson’s writing here is capable but not extraordinary. Again, large chunks of exposition, but that’s par for the course for a lot of ’50s-’70s SF. “Workmanlike” is a good description. The dialogue was decent, though the characterization needed work—Miles goes from antisocial dimwit to capable military commander in the blink of an eye—and parts are downright stilted. Worse, for me, was the conclusion, little more than an exercise in the Socratic method with Miles as proponent for the author’s socio-political views. I understand them, I’m not sure I agree with them, but when they felt this tacked-on and forced I’m not going to convert. Anyways, it wasn’t something I expected from Miles’ character as he’d been depicted thus far.

Hour of the Horde is a competent but pedestrian military space opera; it does everything a military space opera should without doing anything new or interesting. I assume die-hard fans of Dickson’s will eat this up, and it was passable enough that I’ll read some more of Dickson eventually, but Horde is rather forgettable. Too by-the-numbers and vanilla to be worth noting, and its protagonist starts off as an unlikeable sociopath and ends up a superman.

16 thoughts on “Hour of the Horde – Gordon R. Dickson”